Accessibility links
How A City Goes Broke : Planet Money Harrisburg, Pa, spent more than $300 million on a garbage incinerator. Now it has more debt per capita than any other U.S. city. 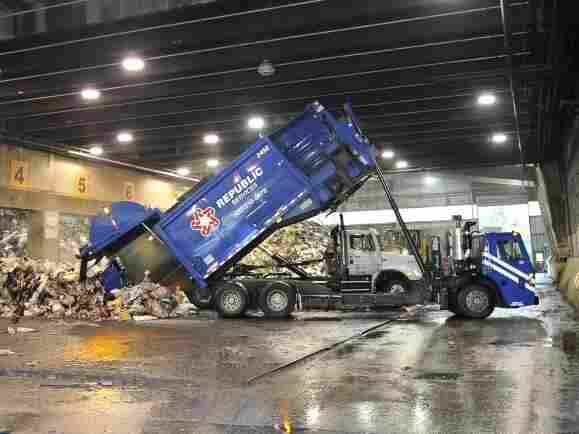 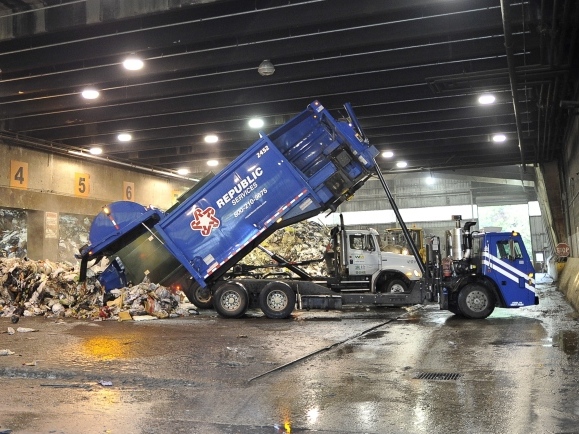 A garbage truck at the Harrisburg incinerator.

This is the first of two stories we're doing on Harrisburg. Read the second story here.

Eric Papenfuse owns a bookstore in Harrisburg, Pa. He used to be on the city agency in charge of basic municipal services — sewer, water, trash.

He's giving me a tour of the town, known mainly these days for having more debt per resident than any other city in the country. The city got into so much debt because of the way it deals with garbage. So, Papenfuse drives me out to the edge of town to see the trash incinerator that sunk the city.

"Welcome to the almost-$350-million-in-debt Harrisburg incinerator," he says.

Garbage trucks are pulling in and dumping huge mounds of trash. The trucks have to pay a fee to leave their trash here. Those fees were supposed to pay for the incinerator. It didn't work out that way.

Out behind the incinerator, a field is littered with big pieces of old machinery — steel tubing, a pressure vent — that represent decades of work on the incinerator. For years, Papenfuse tells me, the city borrowed money to upgrade the incinerator.

There was always the promise that the incinerator would pay for itself real soon — if only they could get it exactly right. Every time the debt came due, the city borrowed new money to pay back the old money.

"Basically, every time something goes wrong with the incinerator, [they] say, 'Let's just make it better,' " he says. " 'Borrow twice as much money; we could burn twice as much trash.' "

Right around the millennium, the Environmental Protection Agency shut the incinerator down. The city could have cut its losses. It didn't.

"This is when they say, 'We will double the debt and expand the incinerator,' " Papenfuse says.

All along, the city kept saying the debt it was taking on was "self-liquidating." In other words, the trash fees from the incinerator would bring in enough money to pay back the money it was borrowing.

But the debt was never self-liquidating, according to a forensic audit done by the Harrisburg Authority, the municipal board Papenfuse used to sit on.

"Eventually, the money comes due," Papenfuse says. And the trash fees aren't enough to pay it back.

"Unfortunately, the city doesn't have the resources to make those payments ... on what is now over $300 million plus worth of debt," says Bill Cluck. Cluck sits on the board of the agency that called for the audit — the board that Papenfuse used to be on.

The county has paid a chunk of the city's debt, as has an insurance company, which is now suing the city.

Hundreds of millions of dollars later, the incinerator works. It works really well. But Harrisburg has run out of time. So the city is planning to sell it to the highest bidder.

We'll have more later today on how Harrisburg is trying to save itself.