Accessibility links
A 10-Year-Old Boy's Solution To The Euro Crisis, In 1 Picture : Planet Money "All Greek people should bring their Euro to the bank. They put it in an exchange machine (see left on my picture). You see, the Greek guy does not look happy!!"

A 10-Year-Old Boy's Solution To The Euro Crisis, In 1 Picture

A 10-Year-Old Boy's Solution To The Euro Crisis, In 1 Picture

My name is Jurre Hermans. I am 10 years old and live in the Netherlands. I am quite worried about the eurocrisis and look at the TV news daily. The eurocrisis is a big problem. I think about solutions. ... I made a picture of my solution and I will explain it to you.

A British businessman is offering a £250,000 prize for the person who comes up with the best plan for a country to leave the euro. Finalists for the prize were announced this morning.

There was also an honorable mention for the youngest entrant, Jurre Hermans, who says he's 10. Here's the picture he submitted with his entry: 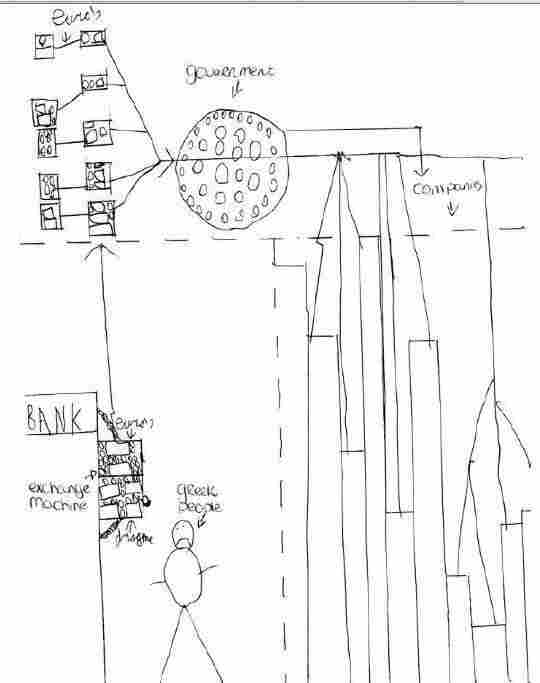 "I made a picture of my solution and I will explain it to you." Jurre Hermans/Policy Exchange hide caption 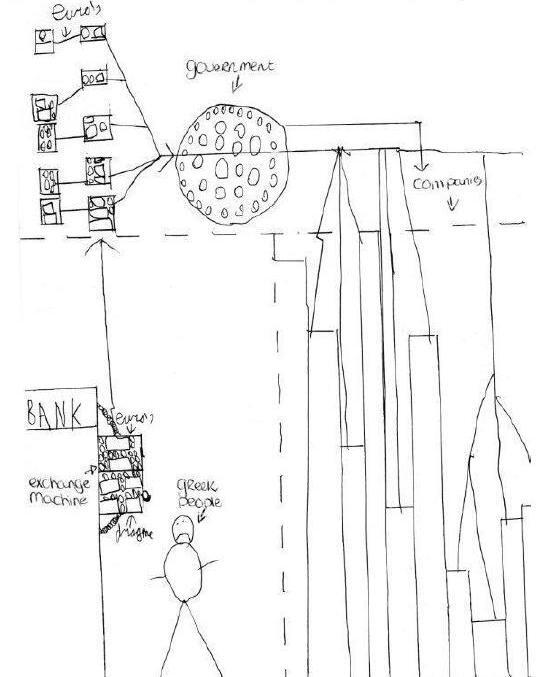 "I made a picture of my solution and I will explain it to you."

And here's his explanation of the picture (PDF):

All Greek people should bring their Euro to the bank. They put it in an exchange machine (see left on my picture). You see, the Greek guy does not look happy!! The Greek man gets back Greek Drachme from the bank, their old currency. The Bank gives all these euro's to the Greek Government (see topleft on my picture). All these euros together form a pancake or a pizza(see on top in the picture). Now the Greek government can start to pay back all their debts, everyone who has a debt gets a slice of the pizza. You see that all these euro's in the pizza's go the companies and banks who have given loans in greece (see right in my picture).

Then Jurre stops with the fun and games and (somewhat creepily) brings down the hammer:

The Greek people do not want to exchange their Euro's for Drachmes because they know that this Drachme will lose its value dramatically. They try to keep or hide their Euro's. They know that if they wait a while they will get more Drachmes. So if a Greek man tries to keep his Euros...and it is discovered, he gets a penalty just as high or double as the whole amount in euros he tried to hide!!!

Then, to close, he goes back to Mr. Nice Guy:

A bit more about myself: I am 10, love animals since I have a dog and a bird. I live in a family of 5 in Holland. I have 5 friends with whom I play all day, mostly outside. ...

* In a story last year, we interviewed the British CEO who put up the prize money — and we talked about why leaving the euro would be so hard.

* The entries that were selected as finalists were posted this morning.