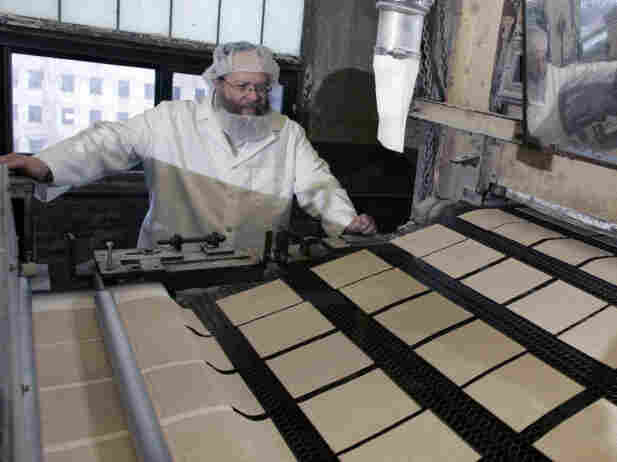 The matzo business may be the most heavily regulated business in the world.

The regulators are rabbis, who stand on the factory floor and make sure that everything adheres to kosher law. The rules may sound burdensome, but I learned on a recent visit to a matzo factory that they can also be great for business.

My guide through the factory is one of the world's leading authorities on making matzo. He's not a rabbi, or even a Jew.

"I was raised Southern Baptist and my wife is Roman Catholic and I'm running operations for the country's largest Jewish food company," says Randall Copeland. "Only in America."

He manages the matzo production line at Manischewitz, the biggest kosher food manufacturer in the country. His job is to keep the line running fast and cheap.

But he has to answer to an on-site regulator: Rabbi Yaakov Horowitz. You can think of him as the guy who makes sure all of the rules of matzo are followed. And there are a lot of rules.

"We have talmudic commentaries," Horowitz says, pointing to a bookshelf in his office. "Obviously, [there are] a large amount of traditional law texts behind you."

Matzo bread must be unleavened. But what, precisely, does it mean to be unleavened? Rabbis debated this for centuries and gave a very precise time limit for how long dough can be left uncooked: 18 minutes.

If there's some kind of glitch, and dough sits uncooked for more than 18 minutes, "we have to stop, clean those lines, strip off all that dough, throw it away," Copeland says. "Now that's expensive. You don't want to do that."

There are tons of other rules. Matzo dough can't include all the additives that make modern bread production more efficient. The dough also can't be folded or misshapen. The oven temperature can't drop below 600 degrees.

Horowitz has five kosher law experts stationed throughout the factory, toting clipboards and wearing white smocks over their traditional black jackets. I saw one guy in a hardhat with the word "rabbi" printed across the front.

If something does not look kosher, they can pull a lever that stops the conveyor belt and diverts the matzo into a waste bin.

Copeland estimates that kosher laws add about 20 to 30 percent to the cost of production. That might sound bad for business. In fact, the owners of Manischewitz told me that kosher law could be the best thing they have going for them.

Alain Bankier, co-president of Manischewitz, said that the capital investment in the company's state-of-the-art matzo machinery poses a huge barrier to entry for potential competitors.

So rather than being bad for business, all those kosher rules mean Manischwitz won't have much competition.