Accessibility links
Should We Kill The Dollar Bill? : Planet Money Last month, a Washington, D.C. subway station was plastered with posters of giant dollar bills. One of them said: "Tell Congress to stop wasting time trying to eliminate the dollar bill." The $70,000 ad blitz was part of a small lobbying war over the fate of the dollar bill. 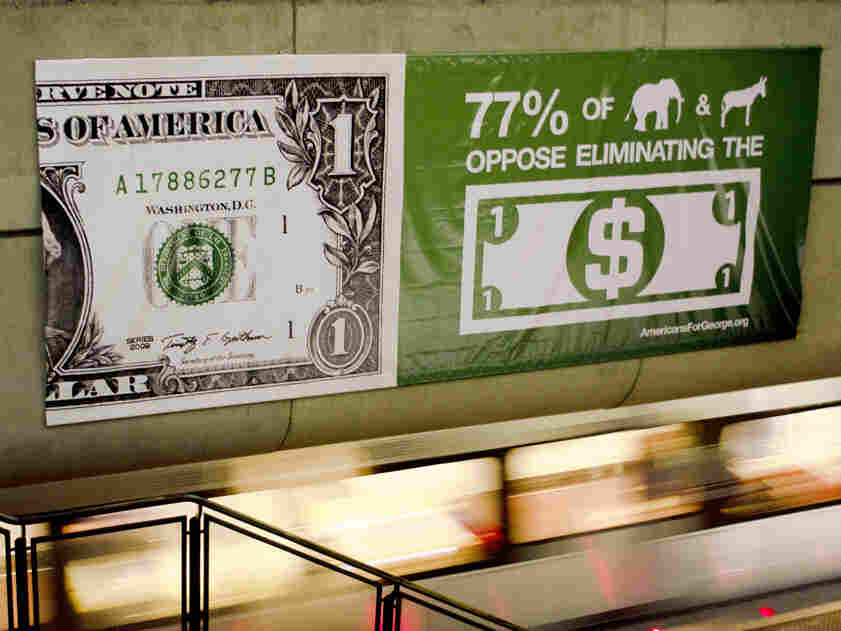 Our story begins last month inside a busy Washington, D.C. subway station plastered with posters of giant dollar bills. One of them says: "Tell Congress to stop wasting time trying to eliminate the dollar bill." Another asks: "Do you heart the dollar?"

Political fights in the nation's capital normally involve billions or even trillions, not single dollars. What's going on here?

This being Washington, there's a back story. The $70,000 ad blitz was part of a small lobbying war over the fate of the dollar bill. On one side, leading a legislative charge to eliminate the dollar bill and replace it with a dollar coin, are Sens. Tom Harkin, D-Iowa, and John McCain, R-Ariz.

"The most important thing is it's just more efficient. It's way more efficient than a paper dollar," Harkin says. "Canada has a coin that's worth $2 ... Switzerland has one worth about $5... And yet, what have we got? We got a 25-cent piece."

It's worth noting that Harkin and McCain both represent states that are home to businesses that profit from the production of dollar coins.

In Harkin's case, it's PMX Industries Inc., of Cedar Rapids. The company provides metal sheets the U.S. Mint uses to make coins. Harkin says he was pro-coin before PMX was doing business with the U.S. Mint, and so comes to the issue "with clean hands."

McCain's state, Arizona, has the nation's most productive copper mines, and dollar coins are made mostly of copper. McCain declined NPR's request for an interview for this story.

On one level, the logic is persuasive. Coins last longer, so they might make a better choice for supplying the country with pocket money. But coins also cost more to make.

But when you do the math, the situation is more complicated.

To be fair, the people making the case for the paper dollar also have something at stake. Paper advocates include Crane & Co., which has been making the paper for U.S. bills since 1879. The firm started Americans for George, which is responsible for that subway ad campaign.

"U.S. currency: It's some of the most durable banknotes on the planet," says company vice president Douglas Crane, "And the one-dollar bill is probably the hardest-working note there is.

Now a coin-versus-bill cage match is on. Harkin's bill would require Federal Reserve banks to stop putting $1 bills into circulation in as little as four years.

To make their arguments, both sides in the skirmish point to the same reports from the Government Accountability Office, a non-partisan arm of Congress.

In its most recent report, the GAO recommends switching to coins, which could make $4.4 billion for the government over 30 years. But the report says the government benefit does not come from the fact that coins are more cost effective. Instead the benefit comes from something called "seigniorage."

Over time, coins earn more seigniorage for the government, but only because we don't like using them.

"Lots of people when they take coins out of their pocket or purse at the end of the day put them in what we call a coin jar," says the GAO's Lorelei St. James, who oversaw the agency's most recent study.

As a result, the GAO estimates that if the government were to eliminate $1 bills and switch to coins, it would have to replace every two bills with three coins, because one of the coins would sit idle.

So more coins means more profit for the government. But where does that profit come from? It comes from us — the public.

If you put a dollar coin in a coin jar, that's a dollar you haven't invested, a dollar you're not doing anything with. Economists consider this a kind of tax.

There's really no dispute on this point among economists. Even one referred to NPR by the coin lobbying group Dollar Coin Alliance said as much, after reading the GAO report.

"The more I read it, the less I agreed with it," says Robert Whaples, an economist at Wake Forest University.

He says the report focused on the wrong thing: profits to the government. "The government can make profits in all sorts of bad ways," he says.

"People are going to be putting them on top of their bureaus instead of spending them for transactions and that seems like a big waste of resources to me," he says. "This does not seem like a good way to raise money."

As to the question of why it made sense for other countries to switch from small denomination bills to coins, the answer seems to be: Their bills did not last nearly as long as U.S. bills. The Federal Reserve says typical lifetimes of bills from those countries were just three to six months.

Congress has tried unsuccessfully to get Americans to accept dollar coins before.

The coins have been languishing in vaults because the public has rejected them, while a Congressional mandate required continued production of coins to commemorate each president.

The Obama administration announced in December that it would suspend production of presidential dollars for circulation.