Accessibility links
When Should A Country Abandon Its Own Money? : Planet Money More people use Disney Dollars than Iceland's krona. Is it time to give up on the currency? 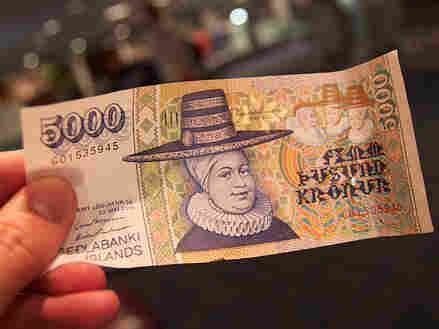 Iceland is a tiny nation in a big financial mess. It's still recovering from the aftermath of the 2008 global economic crisis, which caused a domestic banking collapse.

Its currency, the krona, is also in really bad shape. That's led Icelanders to pose an existential currency question: Should they abandon the krona?

One key problem is size. Iceland has about as many people as Staten Island, so there just aren't that many people on the planet who need to use the krona.

Having a small currency subjects Iceland to high volatility. Before the global economic crisis, money flooded into Iceland's economy.

The krona grew strong, and Iceland felt rich. When the economy crashed, the money rushed out, and the krona plummeted.

It's not clear what Iceland will do. They've discussed adopting the Canadian dollar — a nice, stable currency. Canada has said its open to the idea.

But the economies of Iceland and Canada don't have a lot in common with each other. They don't trade much.

Prime Minister Jóhanna Sigurðardóttir favors a different currency. Her party wants to join the European Union. So she wants to go with the euro.

Or maybe Iceland will stick with the krona — and try to do a better job of keeping it out of trouble.