Accessibility links
How Colleges Fight For Top Students : Planet Money Colleges use money to woo top students. It's an effective tactic, but it drives up tuition for everyone else. 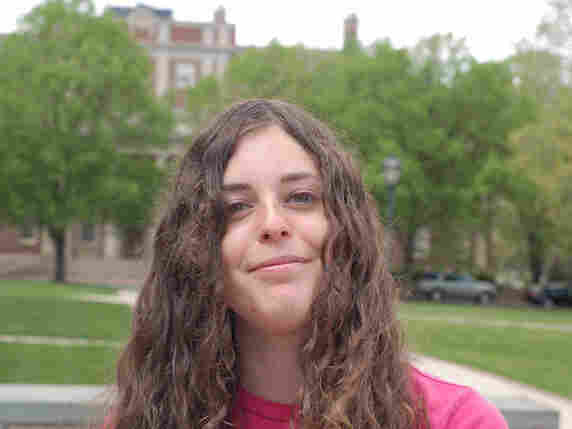 "My mom opened the letter and she called me and told me I got the Marquis Scholarship. And she's like, 'It's a humungous scholarship!'" -Michele Tallarita Jacob Goldstein/NPR hide caption

It's a gray April evening, and two men have driven from Easton, Pa., to Manhattan. The men are administrators at Lafayette College. They're wearing solid black suits with Lafayette pins on their lapels.

They're here to see 12 students — high school seniors who have been admitted to Lafayette and are trying to decide where to go to college.

The men have come to make the students "feel that Lafayette is in their future and make them think that they'll ruin their lives if they go elsewhere," says Greg MacDonald, Lafayette's dean of admissions.

MacDonald laughs as he says this. He's kidding. Mostly.

Lafayette has admitted about 2300 students. Most of those students will choose to go elsewhere; Lafayette's entering class will have just over 600 students. MacDonald and his colleagues want it to be the right 600 students.

Back at the the admissions office on the Lafayette campus, the staff waits every day for the mail. Students who choose Lafayette, send fat envelopes to the office. Those who chose to go somewhere else send postcards. There's a line on the postcard for students to write in what college they're going to.

In the same way that students are competing with other students when they apply to Lafayette, Lafayette is competing against other colleges to lure top students to Lafayette.

That's why the school's admissions officers visit students around the country. It's why they develop fancy recruiting materials.

Those things help. But it costs a lot to go to Lafayette; the sticker price is now more than $50,000 a year. So, when Lafayette really wants to land a student, it has one especially powerful tool: money.

Of course, they're a bit more classy about it than that. They don't just call it money. They call it a merit scholarship.

"Families think their sons and daughters are awarded a merit scholarship because of the fact that they are wonderfully smart and talented," says Robert Massa, a vice president at Lafayette. "[T]he primary reason for awarding a non-need-based merit scholarship is to change a student's enrollment decision from another institution to our institution. That's why colleges do it."

Not surprisingly, money makes a difference.

Michele Tallarita was at the top of her high school class. She was planning to go to Villanova until Lafayette offered her its big "Marquis Scholarship," now worth $20,000 a year.

"My mom opened the letter and she called me and told me I got the Marquis scholarship," Tallarita says. "And she was like, 'It's a humongous scholarship!'"

The scholarship convinced Tallarita to go to Lafayette.

Over the years, the Marquis scholarship has gotten bigger and bigger. Lafayette sees other schools raising their merit scholarships and, to compete, Lafayette does the same.

And the school gives out a lot of these scholarships. It's a great way to land the best students. On top of that, the school gives need-based grants to many students. A majority of students get grants of some kind — fewer than 50 percent actually pay the full sticker price.

But, weirdly, all those grants are one of the things that keeps pushing up the sticker price at Lafayette and other colleges — that big, full-fare number that you always hear about.

If you give discounts to lots of students you have to make up for it somehow. To a large extent, the people making up for it are the students who pay full price.