Accessibility links
How Honduras Can Pull Off Five Centuries Of Legal Reforms In A Decade : Planet Money By building a city from scratch, Honduras can fast-track reforms that could otherwise take centuries to achieve. 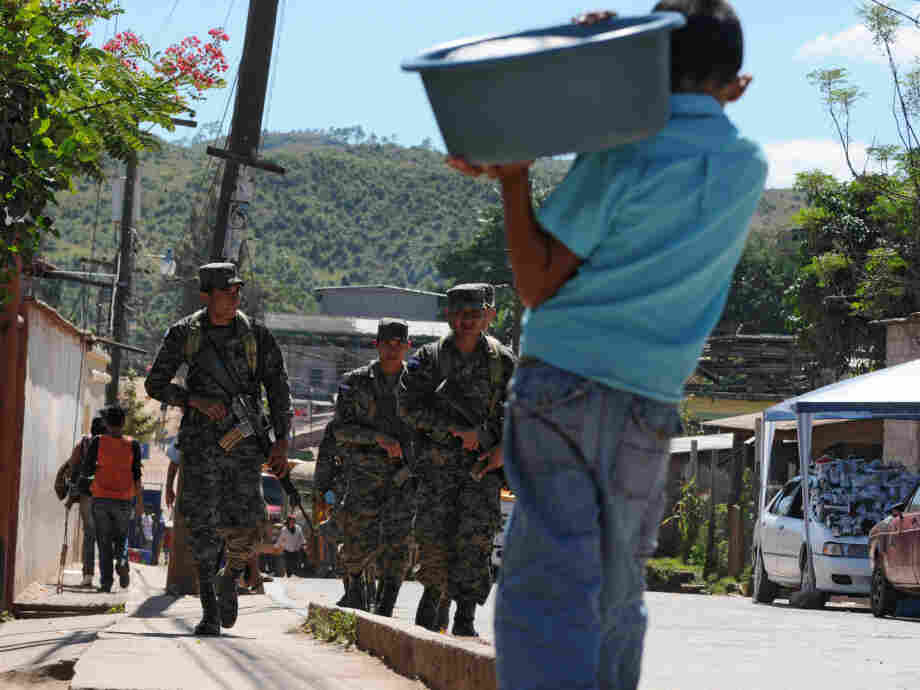 Honduran soldiers patrol poor neighborhoods in the outskirts of Tegucigalpa due to a deterioration of the police force. ORLANDO SIERRA/AFP/Getty Images hide caption

In this week's New York Times Magazine, Adam Davidson profiles Paul Romer, an economist at NYU who has convinced Honduras to try a radical new experiment in development economics: Build a city from scratch — and get foreign governments to help run it. We asked Romer and his research associate, Brandon Fuller, to explain how it can be done. Their response is below.

Today, it is widely assumed each country must establish the rule of law on its own. There's just one problem with this prescription, which Gordon Brown summed up nicely: in establishing the rule of law, the first five centuries are always the hardest. Some societies have already been down this long and arduous path. Why can't Hondurans leverage their experience?

With broad political support, the congress in Honduras recently created a new legal entity: la Región Especial de Desarrollo (RED). A RED is an independent reform zone that will offer jobs and safety to Honduran families that have neither. Officials in the RED will be able to partner with foreign governments in such critical areas as policing, jurisprudence, and transparency.

In Honduras, the support for a new approach springs from a stark understanding of the existing challenges. The rule of law is grounded in trust and shared norms, but establishing trust and shared norms is impossible if people live in fear – rural farmers fear repression; landowners fear expropriation; businesses fear that rivals will gain advantages through bribery; government officials fear that businesses will break contracts with impunity; urban residents fear violence from criminal gangs.

By building a new city on an undeveloped site, with rule of law anchored in the systems of trusted third parties, Honduras can fast-track reforms that could otherwise take centuries to achieve. By making the RED accessible to all citizens but forcing the new system on none, Honduras can harness the power of voluntary migration.

We see this power of opt-in when an immigrant chooses to live under the system of rules and norms in the United States. It stands in sharp contrast to the failures that result when the United States attempts to impose the rule of law by force elsewhere in the world.

Honduras is showing the way toward a cheaper and more effective form of development assistance, one in which nations work together to bring credible governance to places where millions of people could move—institution building by invitation rather than invasion.