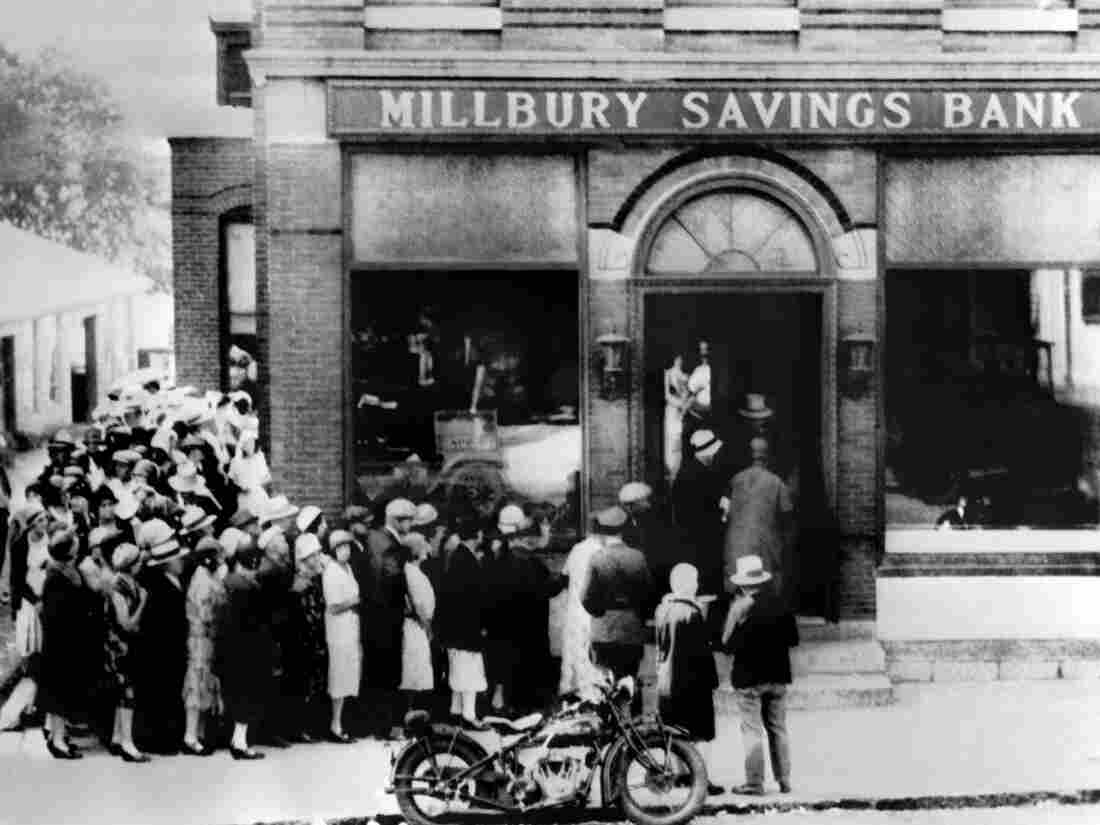 This is what you don't want. AFP/AFP/Getty Images hide caption

There's a slow-motion bank run happening in Europe, as depositors move their money from financially troubled countries like Greece and Spain to stronger countries like Germany.

Banks take depositors' money and lend it out. So even a strong bank is in trouble if all the depositors suddenly decide to pull their money out. A full-blown run can sink a bank in an afternoon.

Once a run starts, there are basically three ways to stop it.

In the 19th century, when bank runs were common in the U.S., banks who feared a run would have employees and relatives line up in front of the tellers and make tiny deposits or withdrawals, to pass the time until the bank closed. In extreme cases — Argentina a decade ago, the U.S. during the Great Depression — authorities will close banks altogether for some period of time, to prevent people from pulling their money out.

The old-school method of having your friends line up obviously doesn't work in the era of Internet banking. And declaring a bank holiday and closing the banks altogether is a huge move that countries only make in moments of full-blown panic, when banks are out of money. Europe hasn't reached that point yet — largely because of option two — borrowing money.

People rush to withdraw their money from the bank when they're afraid the bank is about to run out of money. So if the bank can borrow a bunch of money, that usually stops the run.

The European Central Bank has been lending massive amounts of money to European banks. And that's been essential so far in preventing a full-scale bank run in Europe. This weekend's agreement to bail out Spain's banks goes further. It's a huge pool of loans that should make ordinary savers confident that their bank isn't about to go under.

Deposit insurance started in the U.S. during the Great Depression, and it persists today. That's why you see the letters "FDIC" on the door of every bank in the country today. It's a promise that even if the bank goes under, the government will guarantee that ordinary people get their money back. This promise alone has ended bank runs almost entirely.

"The problem we have today, is that the Spanish guarantee is looked upon by Spaniards as maybe yes, maybe no," says economist Charles Wyplosz. "That's not the kind of risk you like to take with your money." The problem is even more acute in Greece.

One solution that's been proposed: Deposit insurance that's backed by the entire eurozone. In that case, depositors in Greek and Spanish banks would know that their savings were guaranteed not just by their own governments, but by Germany and other, more financially sound governments.

Of course, this would also leave taxpayers in Germany (and every other eurozone country) on the hook for the behavior of banks throughout the continent.