Accessibility links
What's A Yenta? : Planet Money I thought a yenta was a matchmaker. I was wrong — as my mother, among other people, pointed out. 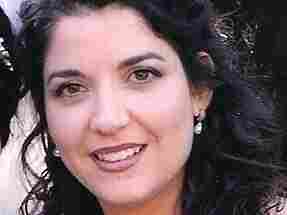 I thought I knew what a yenta was. Apparently, I was wrong.

Yesterday, I did a story about a man with a bizarre job. He was helping Spanish banks that wanted to merge with other banks. In my story, I compared this man to a yenta, someone who arranges marriages.

And then I got this phone message from my mom, who usually calls to tell me what she thinks of my stories:

"The one thing that I noticed immediately was the use of the word 'yenta,' because yenta doesn't actually mean matchmaker. It means, like, an old woman, an old gossipy woman. A shadchan is a matchmaker."

I was wrong. My mother is right. A yenta is not a matchmaker. I thought maybe my mom was the only one who noticed it. Wrong again.

To the many, many of you who have also corrected my mistake: I am sorry.

The correct term for a Jewish matchmaker is shadchanit for a woman, shadchan for a man.

Judith Gottesman helps love-seeking Jews in California find their soul mates. I asked if she ever gets called a yenta.

"To me, a yenta has a negative connotation," says Gottesman. "It's the character on Fiddler on the Roof. She was kind of thought of as sort of a nosy, busybody type. Not necessarily the best skilled at matchmaking."

Gottesman is a professional — although she says she can behave a bit, just a little bit like the yenta from Fiddler on the Roof, if she thinks she has a fantastic match.

"I definitely will call them, or email them, remind them it's really important, I have a really strong sense these people should meet," Gottesman says. "And I've never been wrong. Every single person I had that feeling about got married. Every person who is married through me married the very first person I set them up with."

The happy couple can then say they were set up by a matchmaker, dating coach or shadchanit. Anything but a yenta. Sorry.