Accessibility links
Does Medicaid Make People Healthier? : Planet Money The question is more contentious than it sounds. A new study may finally provide an answer. 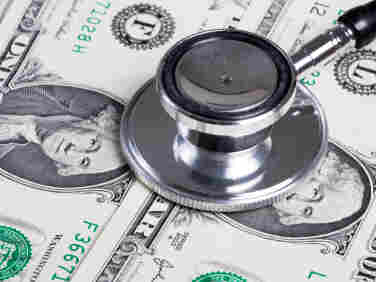 A while back, Robin Boros lost her job, and she and her husband couldn't afford health insurance.

One time, Boros passed out, and her husband called an ambulance.

"The hospital bill, it was atrocious," she says. "We couldn't pay it."

They never figured out why Boros passed out. But after that, she and her husband avoided going to the doctor. At times, she says, she even bought blood pressure medication on the street.

Boros lives in Oregon. In 2008, the state found itself with thousands of extra slots for Medicaid, the government health insurance for the poor. So Oregon held a lottery to fill the slots. Some 90,000 people applied. Boros was one of the ones who won a slot.

Now that she's on Medicaid, she has a doctor she sees regularly. Her blood pressure's under control. Having Medicaid, she says, is way better than having no insurance at all.

This seems straightforward enough. Yet for decades, there has been a debate over Medicaid: Does it really help people?

The debate is especially critical now. In the next few years, millions more people are likely to be covered by Medicaid, the government's health insurance program for the poor. (Here's more on what Thursday's Supreme Court ruling means for the Medicaid expansion.)

On the face of it, it seems like Medicaid would make people healthier, by giving them access to health care they wouldn't otherwise be able to afford.

But there is a counterargument. It says that being on Medicaid is really worse for you than being uninsured, because it provides you with such low-quality health care.

The debate has raged for decades because every study has lacked a control group. There was no way for researchers to randomly assign people to either receive Medicaid or go without. The Oregon lottery allowed them to do just that.

Katherine Baicker, a professor of health economics at Harvard University, compared those who won the lottery, and those who entered but did not get covered.

"People reported their health to be much better once they were insured," Baicker says. "The probability that they reported themselves to be in good, very good or excellent health increased by 25 percent."

People on Medicaid were far less likely to borrow money or have a medical bill sent to a collection agency. And total health care spending (including what is covered by insurance) increased for people on Medicaid.

These results are all self-reported, and it's still somewhat early. Researchers are still tracking the Oregon group, and more data should continue to emerge.