Accessibility links
What ever happened to the TED spread? : Planet Money Once seen as a useful gauge of risk in the banking system, the measure has been tainted by concerns that banks were manipulating a key part of it.

What ever happened to the TED spread?

What ever happened to the TED spread? 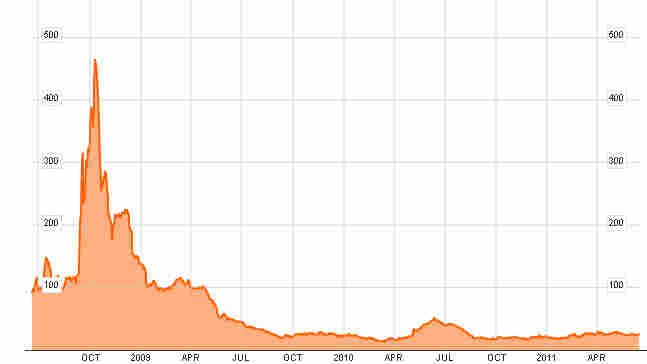 TED spread charts like this one — from June 2011 — have been used to judge whether the financial markets are worried about the health of the big banks. Bloomberg News hide caption 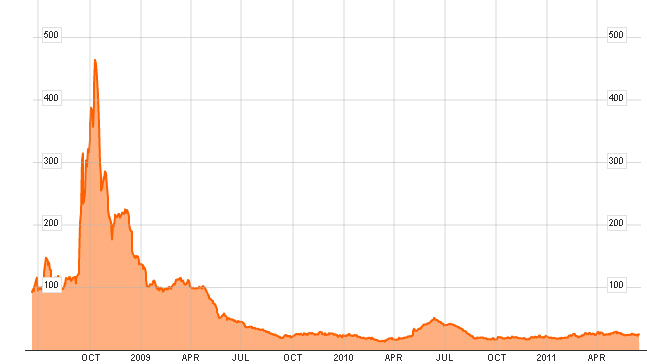 TED spread charts like this one — from June 2011 — have been used to judge whether the financial markets are worried about the health of the big banks.

Over the last week or so, we've been watching the scandal over manipulation of LIBOR, perhaps the single most important global interest rate: See Robert Smith's piece on Morning Edition, and Tuesday's podcast. Today the spotlight turns to a call made to Barclays by a British central-bank official.

The coverage led one commenter on our Facebook page to ask what it all meant for another number that was once common in financial chit-chat: the "TED spread," which was watched closely during the financial crisis (including here at Planet Money). It was a handy way of gauging how risky the banking system was.

It's a good question, so we asked around.

First, a quick refresher on the TED spread itself: It boils down to the difference between what the U.S. government has to pay to borrow over the short term, and what banks have to pay to borrow from each other. The bigger the gap between the two (the spread), the more worried banks are about one another's health: Banks have to pay more to borrow when lenders are nervous. Government borrowing costs are measured using three-month U.S. Treasuries. Bank borrowing costs are measured using — yup, you guessed it — LIBOR.

But wait! People now have good reason to suspect that banks have been trying to manipulate LIBOR. That means the gap may actually have been wider than it seemed during the financial crisis — in other words, things things were probably worse than we thought. It also means the TED spread is probably a less reliable measure of bank health.

Complicating things still more, uncertainty in Europe means U.S. bonds are in high demand. That skews the government-borrowing end of the calculation as well. Put the two together, and "the TED Spread may be going the way of cat entrails," says Dan Alpert, a managing partner at boutique investment bank Westwood Capital and occasional economic commentator.

So investors and analysts are left with a real problem: how to measure the day-to-day riskiness of the banking system. One banking analyst I talked with says some people are using a complex kind of investment called an overnight indexed swap, which is based on the Federal Reserve's Federal Fund Rate — and then comparing that to LIBOR. Not much help when LIBOR itself is suspect, but as the analyst said to me, "Do you have a better alternative?"

Chalk up one more way the LIBOR scandal is causing problems.