Accessibility links
How America's Biggest Bank Makes Money : Planet Money The age-old model of banks taking in deposits and lending them out is only part of the story for the biggest banks. Often, they make more money from fees and trading. 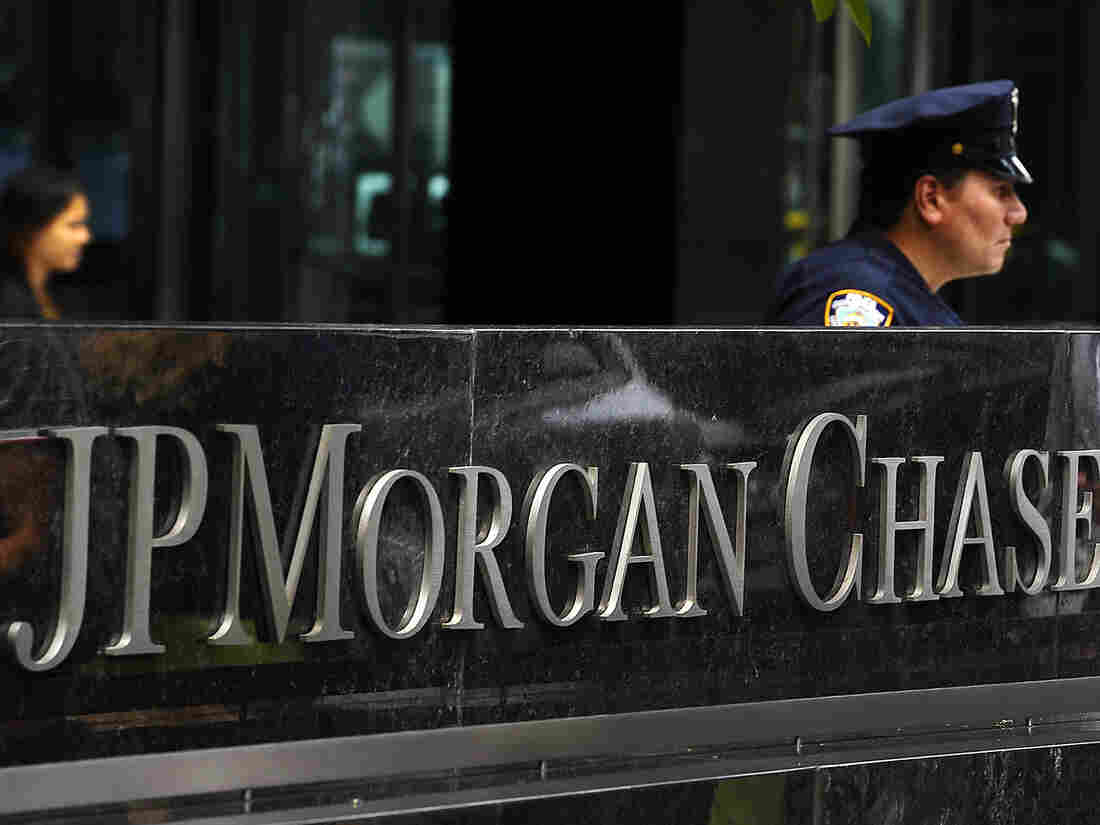 Most people know the traditional banking model, if only from George Bailey in It's A Wonderful Life.

In simplified form: A bank takes deposits from savers, and pays them a low interest rate. Then it lends that money out to borrowers at a higher interest rate. The bank's profits come from the difference between the rates.

Thanks to decades of financial innovation and deregulation, the nation's biggest banks are many things. Lender and deposit-holder are just two — and not necessarily the biggest part of the business any more, either.

And they invest and speculate with their own money. This includes the so-called proprietary trading that we've heard so much about recently at JPMorgan.

In fact, JPMorgan Chase, the biggest bank in America, makes a good case study for just where the big banks really make their money. Depending how you slice it, that old-fashioned take-deposits-and-lend model is barely half of the company's business — and maybe even a little less.

We dissected the company's financial statements for the last decade, with the help of some analysts and banking experts. We put revenue from the company's various businesses into those three big buckets: interest, fees and trading. (Revenue is the money the bank brings in the door, before paying administrative expenses, like salaries and rent.)

The upshot? Last year, that first category — technically called net interest revenue — amounted to about $48 billion, or just under half of JPMorgan's business.

Fees amounted to just over a third of revenue, at about $35 billion. And trading clocked in at about 11%, or around $11.5 billion. (The rest falls into another, catch-all category that JPMorgan reports as "other" revenue.)

Before the crisis, fees and trading revenues combined to make up a solid majority of JPMorgan's revenues, a trend that had been building since early in the decade.

But during the financial crisis net interest revenue jumped sharply, for a couple of reasons. One, JPMorgan bought Washington Mutual, a more traditional bank that made most of its money from deposits and lending.

In addition, JPMorgan suddenly could get money dirt cheap — not just from depositors, who are getting a pittance on their savings these days, but also from the Federal Reserve, which is lending for virtually nothing (if you're a bank).

So even though the bank couldn't charge a lot for its loans, it could get the money it needed to lend even more cheaply, and profit nicely in the process. At the same time, fee income from advising companies on big deals dropped, since fewer companies were being bought and sold.

Since the crisis, though, the old pattern has begun to reassert itself: Fee and trading revenue have been rising as the capital markets have generally risen, while interest revenue has begun to level off.

There are other ways to look at JPMorgan's business, of course. One longtime banking analyst suggests dividing it up by where it came from, regardless of whether you're looking at fees, interest or other kinds of revenue.

Done that way, just a smidgen over half of JPMorgan's business, or $52.1 billion, comes from what most people think of as banking: retail deposits, loans to individuals and corporations, credit-card and auto lending, and so on.

Another $30.4 billion, or 30 percent, comes from investment banking, a business that includes advising companies on mergers and acquisitions and underwriting About $17.2 billion, or 17%, comes from managing other people's money — asset management and treasury services.

Neither approach is perfect. For example, under the first scenario, interest revenue isn't all traditional banking. An unknown chunk of it — JPMorgan doesn't break out the numbers — includes interest wrapped up in some of JPMorgan's proprietary trading activities, including its big bond-trading book. So traditional banking is probably an even smaller part of its business than it seems.

But the bottom line is clear: For big banks like JPMorgan, at least, the business is less about lending and more about fees and trading profits.