Accessibility links
Why Are There 100 Cents In A Dollar? Ask Thomas Jefferson. : Planet Money If not for Jefferson, there might have been 90 pennies in a dollar.

Why Are There 100 Cents In A Dollar? Ask Thomas Jefferson.

Why Are There 100 Cents In A Dollar? Ask Thomas Jefferson. 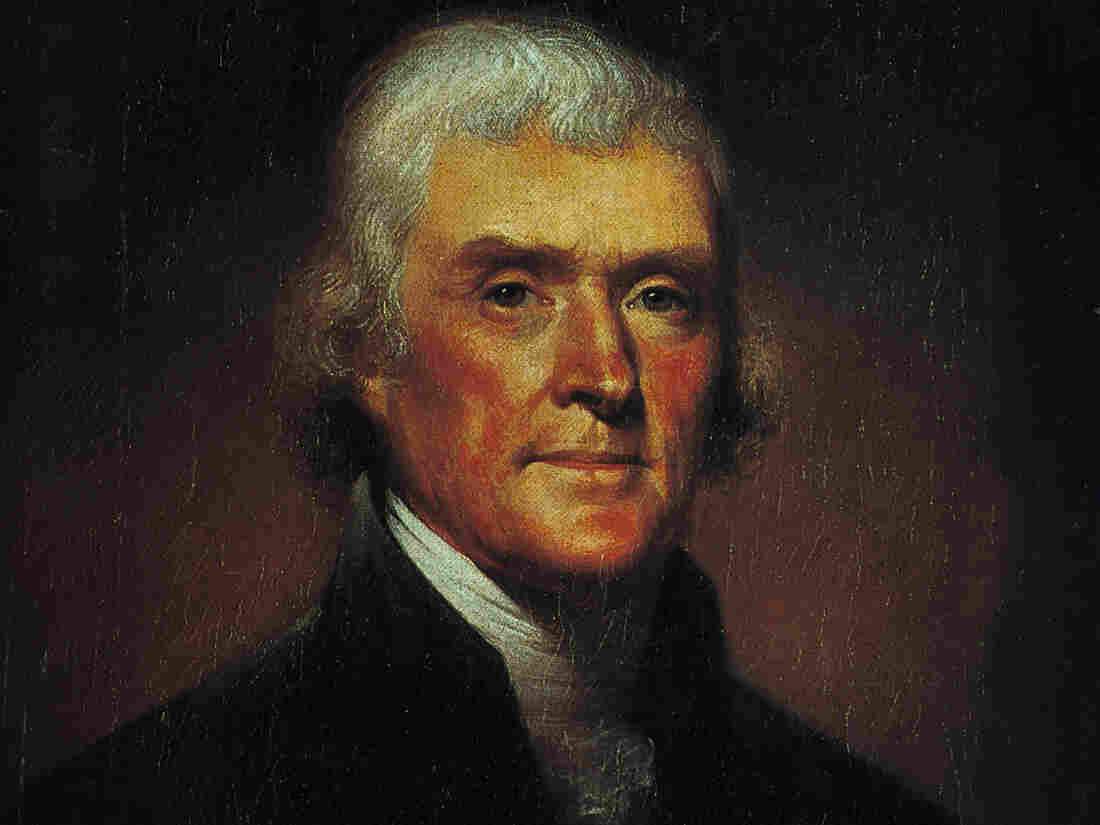 In the years after the American Revolution, American money was a total mess.

Each former colony had its own currency, typically denominated in pounds. But a Maryland pound, say, didn't equal a New York pound, and neither equaled a Pennsylvania pound. British pounds were also in widespread use in the U.S., as were Spanish dollars. And Congress printed notes of its own.

The founding fathers agreed that the former colonies needed a single currency to help unite them into a single country. Even Thomas Jefferson, famously wary of the power of the central government, thought the currency situation was crazy.

In April of 1784, Jefferson wrote Notes on the Establishment of a Money Unit, and of a Coinage for the United States. It's essentially this 11-page ramble about currency, rates of exchange, weights of gold and silver coins. It made the U.S. dollar what it is today. 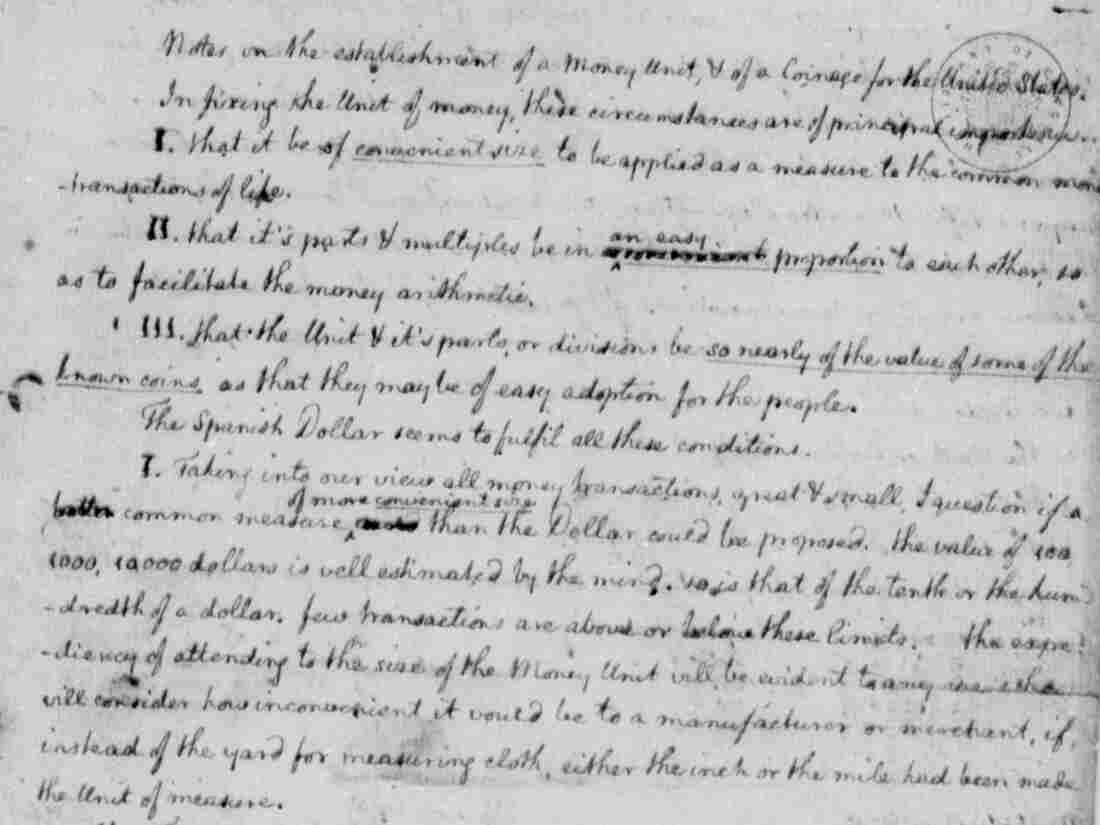 Jefferson's 1784 essay "Notes on the Establishment of a Money Unit, and of a Coinage for the United States." Library of Congress hide caption 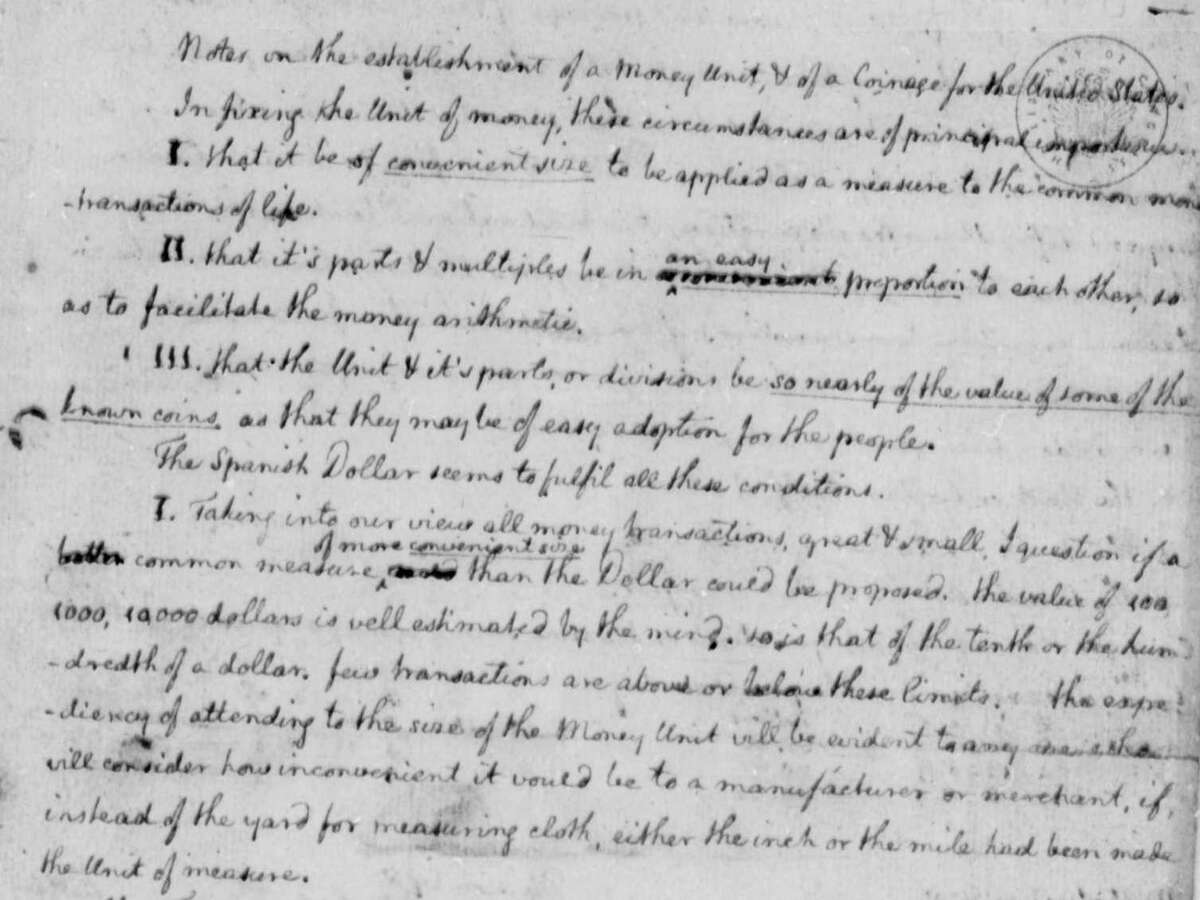 Jefferson's 1784 essay "Notes on the Establishment of a Money Unit, and of a Coinage for the United States."

The U.S. needed a currency that was so simple that any farmer could do his own accounting, Jefferson said. "The bulk of mankind are schoolboys through life," he wrote. "These little perplexities are always great to them."

Jefferson wasn't the inventor of the dollar, and he wasn't the first person to come up with decimalization. But he was extremely influential, and it was his influence that persuaded the new government to do things the way he outlined in this essay.

In 1792, Congress passed the Coinage Act, which laid out the national currency — including dollars, quarters, dimes (then known as "dismes") and cents, "each to be the value of the one hundredth of a dollar."

Thanks to John McCusker at Trinity College and Julie Miller at the Library of Congress for providing historical context for this post.