Accessibility links
In The Kitchen With The Inventor Of Steak-Umm : Planet Money Eugene Gagliardi also invented KFC's popcorn chicken. And he's got some ideas about drumsticks. 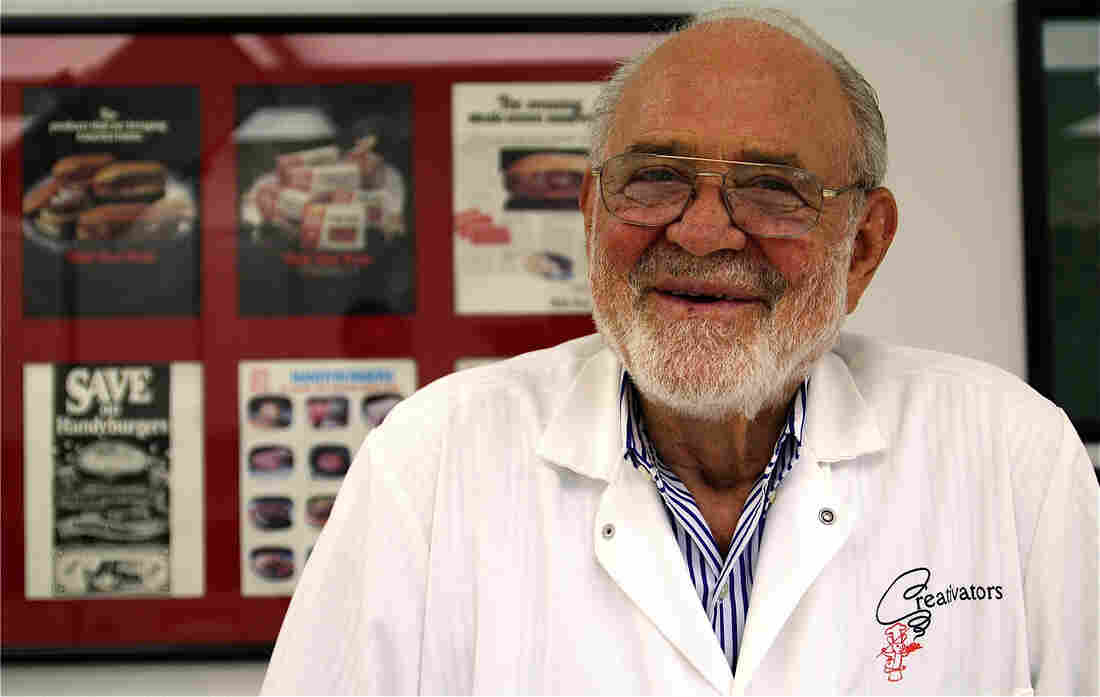 One night in the late 1960s, Eugene Gagliardi was lying awake in bed trying to figure out how to save his company. He was thinking about the Philly cheesesteak.

Gagliardi ran a family business that sold hamburgers and other meat to restaurant chains in the Philadelphia area. But within the span of a few months, the company had lost several of its biggest customers.

Gagliardi was trying to figure out a way to turn the Philly cheesesteak into something people would want to make at home. But the meat used for the sandwich was, as Gagliardi says, "so tough you couldn't chew through it."

At 3 in the morning, he had an idea. He got up out of bed and went to the plant and tried it.

His idea was complicated — he put the meat through the grinder a bunch of times, then he mixed it, put it in a mold, froze it, then he tempered it, then sliced it — and, finally, he cooked it and ate it to see if it was any good.

"It tasted great," he says.

And pretty quickly, it blew up. There were TV ads, and people were buying it in grocery stores from Puerto Rico to Hawaii. Eventually, he sold the family business for $20 million.

Today, Gagliardi is 82 years old. He tried to retire, but he got bored.

So he works in a little house across the street from a cornfield in rural Pennsylvania. Like any good backyard inventor, Gagliardi has turned the garage into a workshop. In his case, that means there are a kitchen and big industrial fridge full of meat. Gagliardi pulls out a chicken and starts cutting it up.

Gagliardi has lots of patents on a chicken. He's not patenting the meat itself — which, obviously, he didn't invent. He's patenting a way of cutting it up. And, yes, it seems kind of silly to get a patent on a way of cutting meat. But it's not like Gagliardi is going to come sue you if you cut meat a certain way in your kitchen. The patents mean he can work as a small inventor and sell or license his ideas to big companies.

We tend to think of innovation as being all about high-technology. But at its core, innovation means coming up with new, useful ideas. Those ideas can come from some 16-year old trying to make a genius new iPhone app in his bedroom. But they can also come from an 82-year-old guy in a converted garage trying to figure out a better way to cut a thigh.

"This is the original popcorn chicken," Gagliardi says. Also known as Patent No. 5,266,064: "Method of making a food product from the thigh of a bird and product made in accordance with the method." Gagliardi sold this idea to KFC in the 1990s and it became a huge hit.

Gagliardi has lots more ideas. He says he's made some breakthroughs recently with the drumstick. But that patent is still pending, and he's cagey about the details.