Accessibility links
What The Apollo Astronauts Did For Life Insurance : Planet Money Before Neil Armstrong walked on the moon, he had to solve a more prosaic problem. 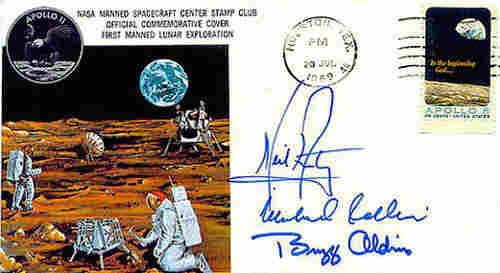 This week, Americans have been remembering Neil Armstrong. But before he walked on the moon, he had to solve a much more prosaic problem.

"You're about to embark on a mission that's more dangerous than anything any human has ever done before," Robert Pearlman, a space historian and collector with collectspace.com, told me. "And you have a family that you're leaving behind on Earth, and there's a real chance you will not be returning."

But Neil Armstrong had something going for him. He was famous, as was the whole Apollo 11 crew. People really wanted their autographs.

"These astronauts had been signing autographs since the day they were announced as astronauts, and they knew even though eBay didn't exist back then, that there was a market for such things," Pearlman said. "There was demand."

Especially for what were called covers -– envelopes signed by astronauts and postmarked on important dates.

About a month before Apollo 11 was set to launch, the three astronauts entered quarantine. And, during free moments in the following weeks, each of the astronauts signed hundreds of covers.

It was life insurance in the form of autographs.

"If they did not return from the moon, their families could sell them — to not just fund their day-to-day lives, but also fund their kids' college education and other life needs," Pearlman said.

The life insurance autographs were not needed. Armstrong and Aldrin walked on the moon and came home safely. They signed probably tens of thousands more autographs for free.