Accessibility links
The Economics Of Stealing Bikes : Planet Money Stolen bikes sell for peanuts. But the risk of stealing them is low. 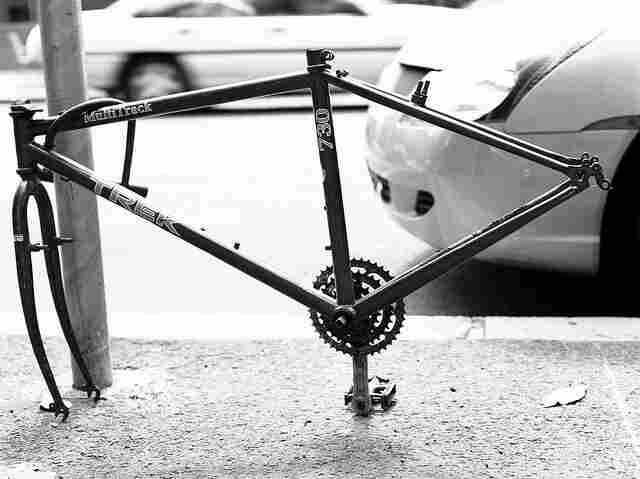 It could be worse. Justin Mclean/Flickr hide caption

The normal bike market is pretty straightforward — supplier, middleman and buyer. The market for stolen bikes has the same roles, but different players. Here's a quick look at how it works.

The supplier, instead of Schwinn or Cannondale, is the bike thief.

For a heroin addict, Ruzzal says, a "front wheel is one hit, rear wheel is two hits, and a leather seat is three to four hits."

This is the guy who "comes around in a van with an angle grinder and he steals a bike by walking up to the bike wearing a bicycle helmet and a messenger bag and he actually looks like he owns the bike."

In the Tenderloin district in San Francisco, stolen bike salesmen walk around with spare bike parts tied to shopping carts and ride around on bikes they're trying to sell.

In the Tenderloin, sellers sometimes go door-to-door looking for buyers.

In New York, restaurant delivery guys are a big market. You need a bike to be a delivery guy, and stolen bikes are cheap — sometimes $10 or $20, fully loaded.

This brings up a fundamental question: If stolen bikes are so cheap, is it even worth it for thieves to rip them off?

"The juice is okay," said Rohin Dhar, founder of the company Priceonomics, who recently wrote about stolen bikes on his blog.But the squeeze — the effort you have to put in, and the risk of getting caught — is zero."

The key, he says: "There's just no risk to the crime."

Joe McCloskey, a police sergeant in the Tenderloin who set up stings to catch bike thieves in the act, agrees.

"Nobody went to jail," McCloskey says. "It's not a high-priority crime."