Accessibility links
The 47 Percent, In One Graphic : Planet Money Why do nearly half of U.S families pay no federal income taxes? Low income and special programs for the elderly, the working poor and families with children.

The 47 Percent, In One Graphic

The 47 Percent, In One Graphic

Mitt Romney's comments regarding the 47 percent of Americans who pay no income tax is getting lots of attention today. Our colleague Mark Memmott explains the context.

Here's a closer look at the numbers.

As of the latest accounting, it's actually just over 46 percent of Americans who pay no federal income taxes, according to the Tax Policy Center (PDF). Here's how that breaks down.

Low income. There's no income tax if your income falls below a certain threshold. For a family of four, that threshold was $26,400 last year.

Benefits for the elderly. Some Social Security payments are not taxed as income. The elderly also get an extra standard deduction that lowers their taxes, in some cases to zero.

Benefits for the working poor and children. These include the earned income tax credit, the child tax credit, and the child care tax credit. Because of these special benefits, a family of four (two parents, two children) earning up to $45,775 last year would not have had to pay income taxes, primarily because of special credits for children.

Other benefits. This includes itemized deductions, tax credits for education, and the income tax exemptions for everything from disability payments to interest on municipal bonds.

Update, 3:30 p.m.: The headline of this post notwithstanding, we found another data set that we couldn't resist.

This one shows a breakdown by annual income of all households that pay no income tax.

Percentages do not add up to 100. For more information see this table from the Tax Policy Center.

Special Bonus Graphic: It's also important to note that income tax is just one of several federal taxes.

The payroll tax, which funds Medicare and Social Security, is another big source of revenue for the government. And most households that don't pay income tax do pay payroll tax.

Among those households paying neither income tax nor payroll tax, almost all are either elderly or earning less than $20,000 a year. Here's a graphic from the Tax Policy Center that breaks this down. 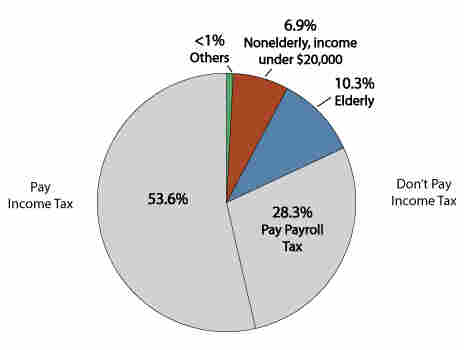 For More: See our post, What America Pays In Taxes