Accessibility links
The Downside Of Tax Havens? Paperwork. : Planet Money Despite all the advertising about absolute confidentiality in places like the Cayman Islands and Bermuda, if you own a company in a tax haven, you are legally required to declare it to the IRS. 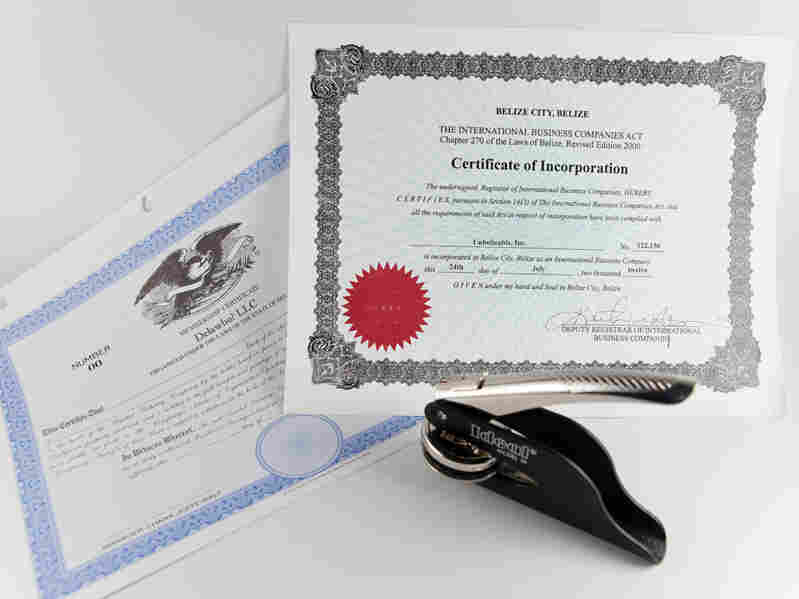 We were curious how hard it would be to set up an offshore company, so this summer we bought two. We at Planet Money are now the proud owners of "Unbelizable Inc." in Belize and "Delawho? LLC" in Delaware. The whole process was quick and easy.

At least that's how it seemed at first — until we got an email from David Buckley, a tax lawyer at Rogin Nassau, telling us we had just walked into an IRS sinkhole.

Buckley described it as "a minefield of U.S. tax obligations," and he said he was worried about me. (The companies are in my name.)

His email made me nervous, so David Kestenbaum and I drove up to Buckley's firm in Connecticut to ask him one important question: How do we make sure I don't break the law?

Step 1: Tell the IRS that I own a company offshore.

It turns out that despite all the big red letters advertising absolute confidentiality, I am legally required to declare these companies to the IRS. Even if, as is true in my case, the company has done absolutely nothing — just exists in some papers.

According to Buckley's colleague, Daniel Gottfried, filling out the right IRS forms is going be time-consuming.

And that's not all: Buckley and Gottfried say learning about the law is expected to take "16 hours and 14 minutes, and preparing and sending the form to the IRS is 24 hours and 17 minutes."

Even worse, Gottfried tells me, the IRS is notorious for underestimating times like these.

You hear about the Cayman Islands, Bermuda and British Virgin Islands being called tax havens. That term makes it sound like if you can figure out how to get your money there, you suddenly don't have to pay taxes. But of course that is not true. If you are an American earning income, you do have to pay taxes. And in fact the IRS wants you to report a lot about what exactly it is you are doing offshore.

So what's the benefit of doing things offshore? Well, if you are determined to evade taxes, if that's your goal, then creating a complex financial structure in a tax haven will certainly make it harder for the government to catch you.

Harder, but not, according to Buckley and Gottfried, impossible. An audit could trip you up, they say, and then of course there are the IRS's usual informants.

"Scorned lovers and disgruntled employees are a great source of information for the IRS," says Buckley.