Accessibility links
He Won't Tell You His Name, But He'll Help You Hide Your Money : Planet Money A trip into the world of "asset protection" — a fancy way to say "hiding money." 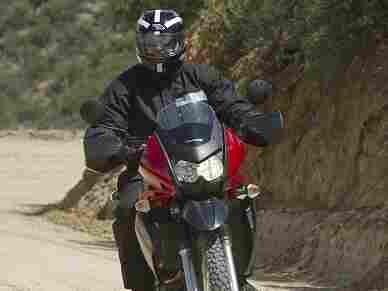 One popular use, it turns out, is what professionals call "asset protection." Ordinary people call this "hiding money."

Maybe you're a surgeon worried a patient might sue you and take everything you have. Or you want to hide money from your ex (or your soon-to-be ex).

Bobby Casey lives in Latvia. The director of operations at his company goes by "Adam Wolf," but that's not his name. There's a photo of Adam Wolf on the website, but you can't see his face. He's riding a motorcycle, dressed in black, wearing a helmet and sunglasses.

Asset protection is one of those professions where you can make enemies. Bobby Casey says he's simply trying to help people build a fortress around wealth they've earned.

Say you own a piece of property with a few rental units, and you're worried about a lawsuit from a tenant who claims to have slipped on the stairs.

First step, place the property into a legal entity into a trust. Then, when a lawyer looks for who owns the building, all he finds is the trust. The lawyer has to go get a court order to get the trust document, which is when he encounters the second layer of your financial fortress. The trust is owned not by you, but by some company in Delaware. That company also doesn't have your name attached to it.

"It's kind of like Alice in Wonderland down the rabbit hole," Casey says. "It makes it very complicated to chase down owners."

The whole point is to put up barriers to discourage people from suing you. Casey recommends all his clients keep some money out of the country entirely — perhaps by setting up a shell company on the Caribbean island of Nevis with a bank account in Latvia.

Now a lawyer trying to penetrate your fortress might have to fly to Nevis. And then, even if the gets what he wants there, he would have to go to Latvia.

But, I asked Casey, isn't the point of the court system to sort that out? Isn't he helping people hide assets that actually should go to other people?

That's debatable. What's not debatable: All these tricks are within the law. "It's legal," one lawyer said to me. "Is it moral? That's a question for the bishop."

Correction: Due to an editing error, an earlier version of this story incorrectly said that Bobby Casey is not Bobby Casey's real name. It is his real name.