Accessibility links
Romney And President Obama Vs. Our Economist-Approved Presidential Candidate : Planet Money During the presidential debate last night, President Barack Obama and Mitt Romney talked about their political platforms. Here's how what they said matches up with our economist-approved presidential platform.

Romney And President Obama Vs. Our Economist-Approved Presidential Candidate

Romney And President Obama Vs. Our Economist-Approved Presidential Candidate 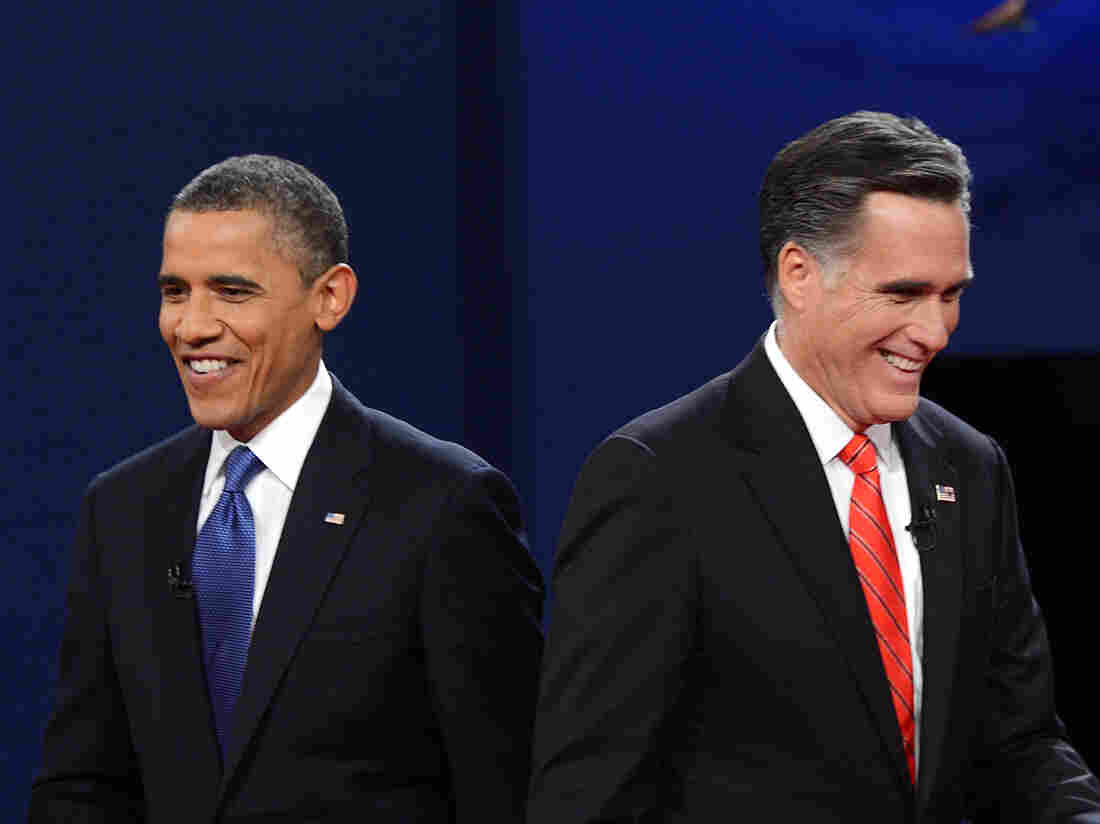 During the presidential debate last night, President Barack Obama and Mitt Romney talked about their ideas to grow the economy. Here's how what they said matches up with our economist-approved presidential platform:

The word "deductions" was used 14 times in last night's debate, but neither candidate specifically mentioned the mortgage interest deduction or the deduction companies get for providing health-care to employees. Mitt Romney talked about limiting, but not totally eliminating, deductions. He said: "...What are the various ways we could bring down deductions, for instance? One way, for instance, would be to have a single number. Make up a number — 25,000 (dollars), $50,000. Anybody can have deductions up to that amount. And then that number disappears for high-income people. That's one way one could do it."

Though both candidates expressed interest in lowering the corporate income tax, neither said they want to get rid of it entirely. President Obama said: "When it comes to our tax code, Governor Romney and I both agree that our corporate tax rate is too high. So I want to lower it, particularly for manufacturing, taking it down to 25 percent."

Our plan, crafted by six economists, supports eliminating all income and payroll taxes. No one on stage last night suggested this, though both candidates said they want to bring down the tax rate for the middle class. Romney said: "I will not, under any circumstances, raise taxes on middle-income families. I will lower taxes on middle-income families." President Obama said: "I believe that the economy works best when middle-class families are getting tax breaks..."

A carbon tax was never mentioned last night. But President Obama did say: "... Oil and natural gas production are higher than they've been in years. I also believe that we've got to look at the energy source of the future, like wind and solar and biofuels, and make those investments." Romney said he wants to increase production of oil and gas in the U.S.: "...your administration has cut the number of permits and license in half. If I'm president, I'll double them. And also get the — the oil from offshore and Alaska. And I'll bring that pipeline in from Canada."

Neither candidate talked about drugs or the economic benefits of making marijuana legal.

For more, listen to our shows about our economist-approved presidential platform: