Accessibility links
Manufacturing Jobs Aren't Coming Back, No Matter Who's President : Planet Money The share of Americans working in manufacturing has been falling for decades. Yet politicians continue to talk about the sector as if it's the key to the nation's jobs problem.

Manufacturing And Jobs In America 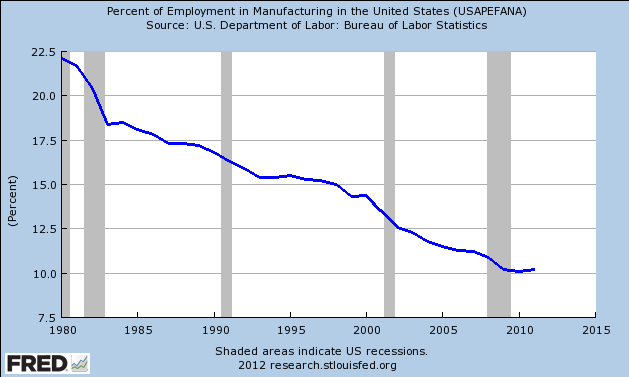 Which is to say, the decline of manufacturing jobs in the U.S. economy is not about who is president or what his policies are. It's the result of long-running, irreversible, historical factors (read: technology and globalization).

But when the subject of jobs came up last night, President Obama and former Gov. Romney talked a lot about manufacturing. There are gauzy, nostalgic reasons for this. In the decades after the second world war, high school dropouts could walk onto factory floors all around America and find decent, secure middle-class jobs.

By the early '70s, a a quarter of American workers worked in manufacturing. But in the decades that followed, technological improvements allowed manufacturers to produce more stuff with fewer workers. And the workers factories did need had to be more highly skilled. They were needed not for their brawn, but for their ability to operate and maintain high-tech equipment.

Today, only 9 percent of Americans work in manufacturing. That's not nothing. And, in fact, the sector has been adding jobs recently after getting hammered during the recession.

But the long-run picture is clear. Manufacturing jobs will never again hold the central place in our economy that they once did. At the same time lots of other sectors — health care, professional services — will continue to become more important, and will continue to offer good, middle-class jobs. But those jobs will not, for the most part, be open to high school dropouts.

Education, not manufacturing, is the key to long-term job growth in America. As Cristina Romer, the former chairwoman of Obama's Council of Economic Advisers has written:

There are sectors where workers with good educations could earn good wages if the economy were healthy. Why focus on manufacturing to create such jobs? Instead, government could make it easier for workers to get the education needed for high-skilled jobs in many fields — and encourage business formation wherever entrepreneurs see a promising opportunity. ...

AS an economic historian, I appreciate what manufacturing has contributed to the United States. It was the engine of growth that allowed us to win two world wars and provided millions of families with a ticket to the middle class. But public policy needs to go beyond sentiment and history. ... So far, a persuasive case for a manufacturing policy remains to be made ...