Accessibility links
Lance Armstrong And The Business Of Doping : Planet Money The story of Lance Armstrong's alleged doping is, in part, the story of an astonishing business enterprise. Here's how it reportedly worked. 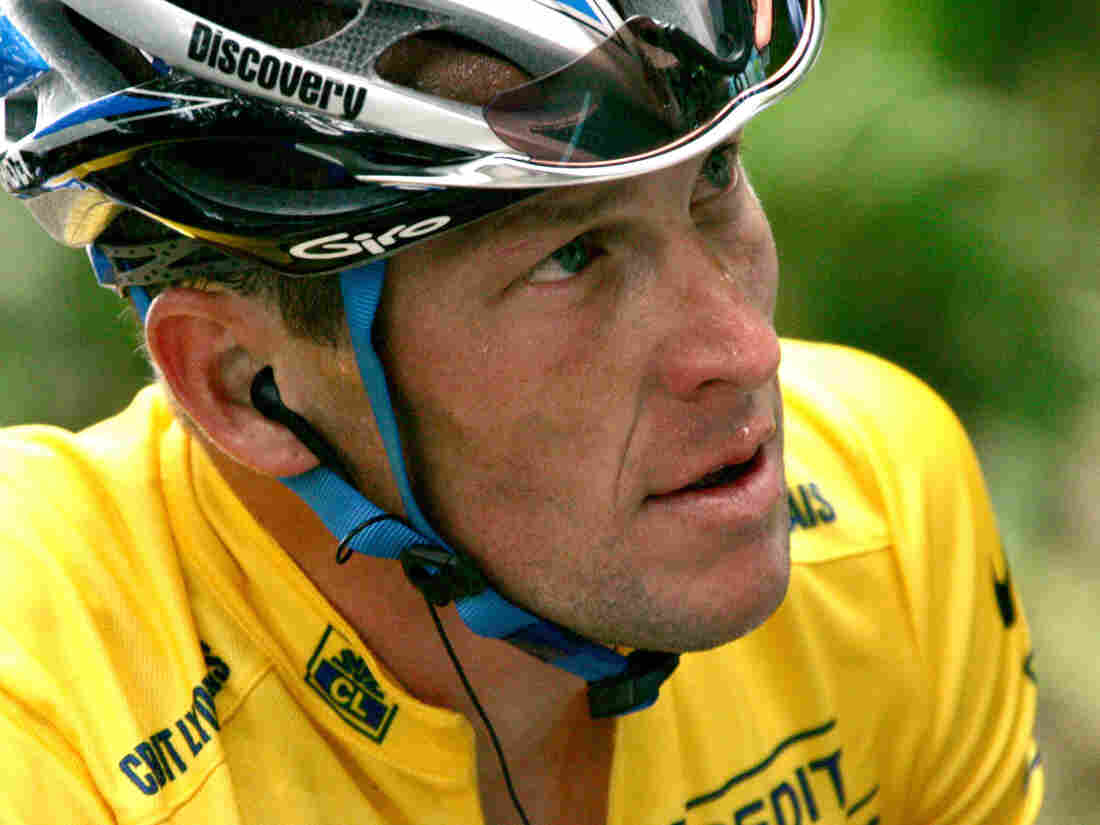 The story of Lance Armstrong's alleged doping is, in part, the story of an astonishing business enterprise — an enterprise that drove what the U.S. anti-doping agency called "the most sophisticated, professionalized and successful doping program" cycling has ever seen.

The story of that enterprise starts in 1998, when the Festina cycling team was caught at the Tour de France with a car full of banned drugs. According to author Daniel Coyle, this marked a huge shift in the culture of doping in cycling.

Coyle co-wrote The Secret Race, a book about the Tour de France and doping.

Coyle says that before the Festina bust, team officials and doctors handled the doping programs. Riders did little more than "nod, say yes and extend their arms [for drugs]." After the bust, he says, riders had to take over the doping operation themselves.

"It suited riders who were entrepreneurial, and who were not averse to taking risk," says Coyle. "And that was Lance Armstrong."

Riding for a team sponsored by the U.S. Postal Service, Armstrong won his first of seven straight Tour de France titles in 1999, the year after the bust. Coyle agrees with the description of Armstrong running the enterprise like a CEO — a CEO who gobbled up information as a way to control the operation.

According to evidence and testimony contained in last month's report by the U.S. Anti-Doping Agency, or USADA, Armstrong helped devise a strategy where his gardener would follow the tour on a motorcycle and deliver EPO, the banned drug that riders used to boost their level of oxygen-carrying red blood cells.

"We called him 'Motoman,' " says Tyler Hamilton, who was Armstrong's teammate at the time, and who co-authored The Secret Race. "We were able to cheat throughout the whole '99 tour by probably every third or fourth day taking a shot of EPO."

He says didn't know about Motoman. And while he was on the team, he refused to use the services of Dr. Michele Ferrari, an alleged doping doctor who Coyle calls the team's R&D department. Ferrari had a brilliant medical mind, and figured out how to beat the test for EPO that first came out in 2000, Coyle says.

Andreu says his decision to steer clear of Ferrari, and his refusal to fully commit to the doping program, cost him his job on the team. "I only wanted to race that one additional year, and they fired me," he says.

In 2006, Andreu publicly admitted he had doped. It was also revealed that he and his wife, Betsy, had been subpoenaed and had testified that they'd heard Armstrong admit to doping.

It cost the Andreus — literally.

Frankie Andreu had been working as a cycling team director and as a TV reporter covering major races. But suddenly, he says, jobs started drying up.

"Nobody would ever say, 'Well, it's because of your admission; it's because of Lance Armstrong,' " Andreu says. "It would just be, like, 'This isn't going to work out,' or, 'I don't think this is for the best.' "

The USADA report cites direct incidents of influence and pressure, even apparent intimidation. At one point, according to the report, Armstrong told a teammate he had to keep using Ferrari and his doping program if he wanted to keep riding for the team. The report also describes Armstrong sending a threatening text message to the wife of a former teammate who was subpoenaed and who testified against Armstrong. The message allegedly read, "Run, don't walk."

"I'm not going to start from the premise that USADA's conclusion accurately states what the evidence would be if it had actually been tested in front of a neutral fact-finder in a fair proceeding," Luskin said.

Armstrong had the chance to test USADA's evidence, but he chose not to have a hearing before a panel of independent arbitrators. He called the process one-sided and unfair, despite the fact that a federal judge ruled that USADA's arbitration rules are "sufficiently robust to satisfy the requirements of due process."

Armstrong may have decided not to fight. But his war necessarily isn't over. He still may face costly lawsuits. He may be subpoenaed to testify in other USADA hearings. And there was more than a hint of defiance in the recent photo he posted on Twitter. The photo showed Armstrong lying on a couch in his home, with his seven Tour de France winners' jerseys displayed above him. The jerseys that, technically, are no longer his.