Accessibility links
Understanding The 'Milk Cliff' : Planet Money You've heard of the "fiscal cliff," but have you heard of the "milk cliff"? If Congress doesn't take action on the farm bill before Jan. 1, milk prices could shoot up dramatically. 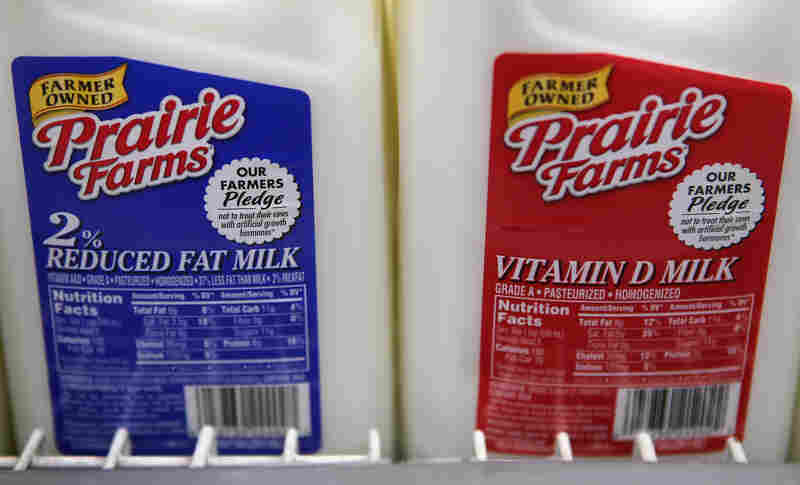 If Congress doesn't take action in the next four days, milk prices could shoot up dramatically.

The farm bill contains something called the Dairy Product Price Support Program. It's designed to help farmers by guaranteeing a minimum price for milk.

Basically, the government buys things made from milk — cheese, butter and dry milk. (It doesn't want to have to actually store milk, which can quickly go bad.) Buy up enough of this stuff, and you drive up the price of milk.

The government hasn't had to buy a significant amount of this stuff in the past decade because the price of milk has been high enough on its own.

Here's where the cliff comes:

The minimum price for milk, called the "support price," is set in the farm bill. The farm bill is set to expire on Jan. 1, and here's the catch: If that happens, the minimum price reverts to the price set more than 60 years ago in the Agricultural Act of 1949. That price is a parity price, which means it was calculated based on how much it cost farmers to make milk during the "golden age of agriculture" 1910 -1914. Things have changed a lot since then, and costs for farmers today (equipment, labor, feed, cows) are radically different.

If Congress doesn't do something, the government will find itself buying a lot of cheese, butter and dry milk come Jan. 1, and even worse, it will essentially be paying double the price. Those higher prices will then trickle down to the grocery store where the rest of us could see milk prices go from around $4 a gallon to something more like $6 a gallon.

Probably not. Dramatically higher milk prices won't help Congress' reputation for political gridlock. Farmers wouldn't like it either. Although higher prices would be a short-term boost for them, agricultural economics professor Joseph Balagtas, of Purdue University, says it would "draw a lot of attention to dairy policy that farmers wouldn't want." The USDA, the folks who would be in charge of buying all that cheese and butter, say returning to permanent law would be a "bad outcome" that no one should want.

Want something else to worry about?

Balagtas says there is another outcome here that could be equally bad — passing the 2012 farm bill in its current form.

Balagtas is concerned about a specific part of the 2012 farm bill that deals with dairy — the Dairy Market Stabilization Program. The program is designed to keep milk prices high by taxing farmers for producing more milk than the government wants them to.

Balagtas says the program would be bad for successful dairy farmers because it "would explicitly penalize growth" — essentially punish them for being more efficient and producing more milk. Large, profitable dairy farmers share his concern about the program.

Discouraging farmers from producing more milk means less milk on shelves for sale, which once again, means higher prices for the rest of us.