Accessibility links
The Fake Economist Who Conned A Nation : Planet Money His secret: He told people what they wanted to hear.

The Fake Economist Who Conned A Nation

The Fake Economist Who Conned A Nation 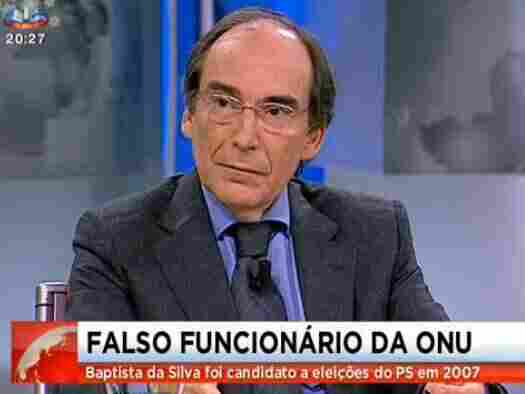 As an ex-presidential consultant, a former adviser to the World Bank, a financial researcher for the United Nations and a professor in the US, Artur Baptista da Silva's outspoken attacks on Portugal's austerity cuts made the bespectacled 61-year-old one of the country's leading media pundits last year.

The only problem was that Mr Baptista da Silva is none of the above. He turned out to be a convicted forger with fake credentials and, following his spectacular hoodwinking of Portuguese society, he could soon face fraud charges. ...

Mr Baptista da Silva's comeuppance began when the UN confirmed to a Portuguese TV station last month that he did not work for the organisation, not even as a volunteer, as he later alleged. Further media investigations uncovered his prison record and fake university titles...

After we read this, we got in touch with Filipe Miranda, a former Planet Money intern who grew up in Portugal, and whose family still lives there. Here's Filipe's take:

This guy came out of nowhere and spent about a month and a half hoodwinking the Portuguese elite. He was invited to speak at numerous events. At one of them, he was even introduced by the wife of a former president.

Apparently, among the few people who suspected him were members of the police, who were familiar with him because he had already spend a significant period of time behind bars.

Despite that — and despite the fake degree and the complete lack of evidence that he was a coordinator from the UN or a professor anywhere — he was quoted extensively in Expresso, a major Portuguese newspaper, and spoke on a panel at the main Portuguese news channel. No one seems to have done any due diligence until the UN put an end to his lie.

When the news came out, the editor from Expresso said he made a "terrible mistake" by "not confirming if this gentlemen was the person he said he was".

The editor said he had lunch with Baptista da Silva, and thought he had "a very consistent and credible discourse from the economic point of view." He was given a card which" didn't seem to be forged." And, the editor said, a reporter from the paper saw Baptista da Silva give a talk at a high-profile cultural organization.

When the truth came out, he accused the media and others of doing a "character lynching."

In a statement, he said:

Calling me a con-man has been easy. But I have yet to see them say the same thing about ... those who transfer capital, both legally and illegally, to tax havens, against the interest of the state, evading their tax bills ... That's what I call complicit silence which benefits not the infringer but the criminal.

It seems like Baptista da Silva pulled off his con in part because he said what a lot of people wanted to hear. He criticized the harsh austerity measures imposed by the government and warned of dire social and political consequences.