Accessibility links
The Lollipop War : Planet Money Candy makers and sugar farmers have been fighting for years in Congress. The sugar farmers are winning. 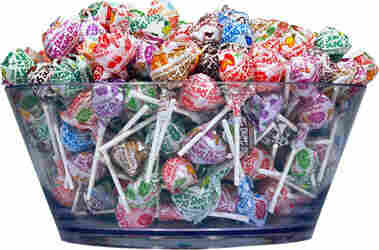 I recently got a tour of the Spangler Candy Co., a family-owned firm in Bryan, Ohio. The company makes 10 million Dum Dums lollipops there every day, and it has a whole separate building where it stores the sugar — enough to fill eight Olympic-size swimming pools.

The CEO, Kirk Vashaw, says he wants to expand the factory and make even more candy there. There's just one thing he needs.

"Let us buy sugar on the free market," he says.

The price in the U.S. is about 15 cents a pound higher than the price in the rest of the world. That costs Spangler Candy an additional $3 million a year.

The higher U.S. sugar price is spelled out in U.S. law. You can find it right here, in the latest version of the farm bill, which says the U.S. government shall guarantee a minimum price for sugar that is not to drop below 22.9 cents per pound.

Because of the higher price here, lots of candies that used to be made in the U.S. — Life Savers, candy canes — are now made overseas.

Candy makers have been fighting the sugar thing in Congress for years, but they keep losing to sugar farmers.

A few days after my trip to the Dum Dums factory, I went to Sabin, Minn., to meet a sugar beet farmer, Blane Benedict. "Our family's been farming here since the late 1870s," he told me as he showed me around the farm.

People in Sabin say the whole local economy benefits when the farmers start turning their beets into sugar. Benedict says the farmers need that special protection in the law because sugar farmers in other countries get help from their governments, too.

But Daniel Sumner, an economist at the University of California, Davis, who used to help set farm policy, doesn't buy it.

"It's a very common rationalization: 'The other kids are doing it,' " he says. Sumner points out that the sugar lobby spends more than all the other agriculture lobbies on political campaigns.

Of course, the candy makers have their own proposed legislation that would get rid of the sugar price rule — and, they say, would help keep candy-related jobs in the U.S.

That bill comes up regularly in Congress but always loses. The latest farm bill, which would extend the sugar program, is expected to pass.