Accessibility links
Can Economics Save The African Rhino? : Planet Money Poachers kill rhinos for their horns. Some economists think legalizing the horns could save the rhinos. 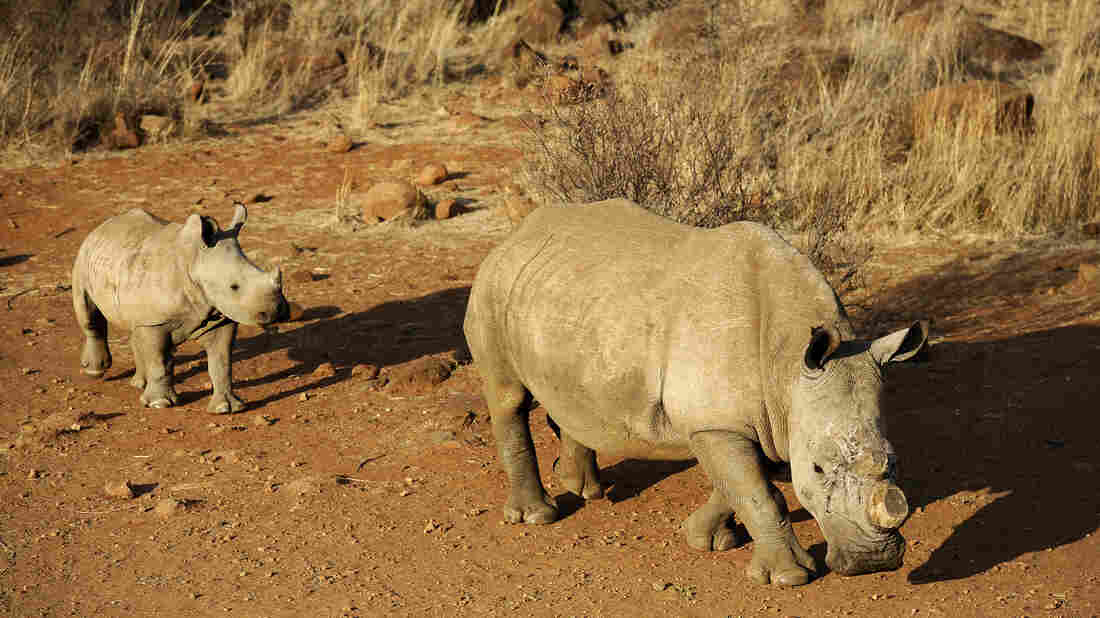 A black dehorned rhinoceros is followed by a calf at the Bona Bona Game Reserve in 2012. South Africa has seen a devastating increase in poaching in recent years as black-market demand for rhino horn has grown. Stephane de Sakutin/AFP/Getty Images hide caption 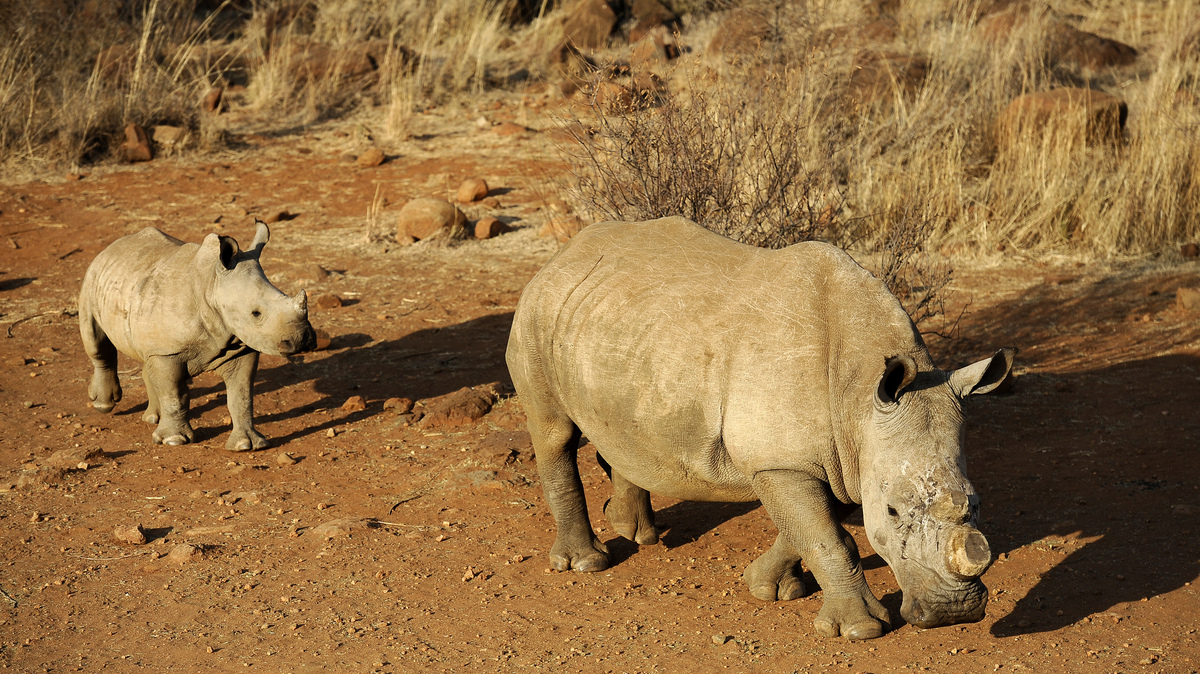 A black dehorned rhinoceros is followed by a calf at the Bona Bona Game Reserve in 2012. South Africa has seen a devastating increase in poaching in recent years as black-market demand for rhino horn has grown.

When Duan Biggs was growing up in the Kruger National Park in South Africa, he used to watch elephants and rhinos walking past his bedroom window. He left home to pursue degrees in biology and economics, and when he returned in 2011 the park looked and sounded "like a pseudo war zone," he says.

"There'd be helicopters flying overhead all the time," he says. "I remember one afternoon coming back to my home from a game drive and the bush was crawling with people with assault rifles, from the army, from the police, and from National Parks. They were looking for poachers."

Historically prescribed for fever and "blood detoxification," it's now used for hangover and the side effects of chemotherapy. It's also a status symbol. "It's the thing to do. What a great gift for your boss, or your government official," conservationist Douglas Hendrie told NPR's Frank Langfitt in Hanoi, Vietnam.

If unchecked, this seemingly insatiable demand for the horn could result in the extinction of wild rhinos within two decades. This has led African governments to consider two radical — and contradictory — proposals for saving Africa's rhinos.

Proposal No. 1: Legalize The Horn

A rhino's horn is composed of the same protein as human fingernails. And, as with fingernails, if you cut off the horn, it grows back. So, Biggs has been arguing, African farmers could raise rhinos on private farms, and periodically saw off the horns for sale overseas.

"Essentially vets would go in, dart the animal and dehorn it," Biggs tells me. "Thereafter the animal gets up again and runs around the bush and continues life as normal," and the horn grows back.

This idea for a legal rhino trade is gaining supporters in the South African government (South Africa has 85 percent of the world's rhinos). There's a push to submit the idea for international vote in 2016 at the triennial meeting of CITES, the international conference on endangered species that originally banned rhino horn sales in 1977.

This possibility worries conservationists like Ian Craig, founder of the Northern Rangelands Trust in Kenya. He says ending the ban will lift the stigma — and cause demand to soar. He predicts that horn-selling kiosks will crop up across Vietnam not unlike cannabis coffee shops in Amsterdam.

"All the economists I've met say that as soon as you place a value on the animal then people are going to look after it and its going to multiply," Craig says. "They're not recognizing that supply could never meet the demand, and the demand is what's killing." 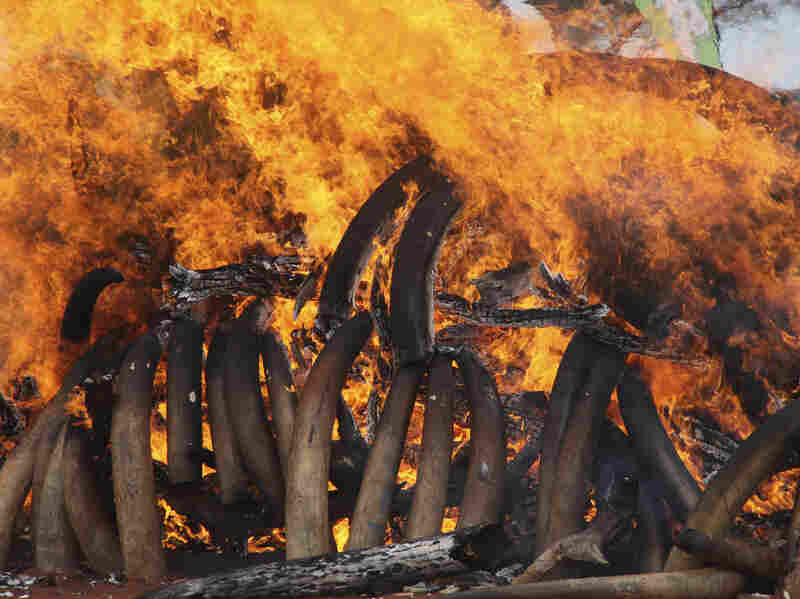 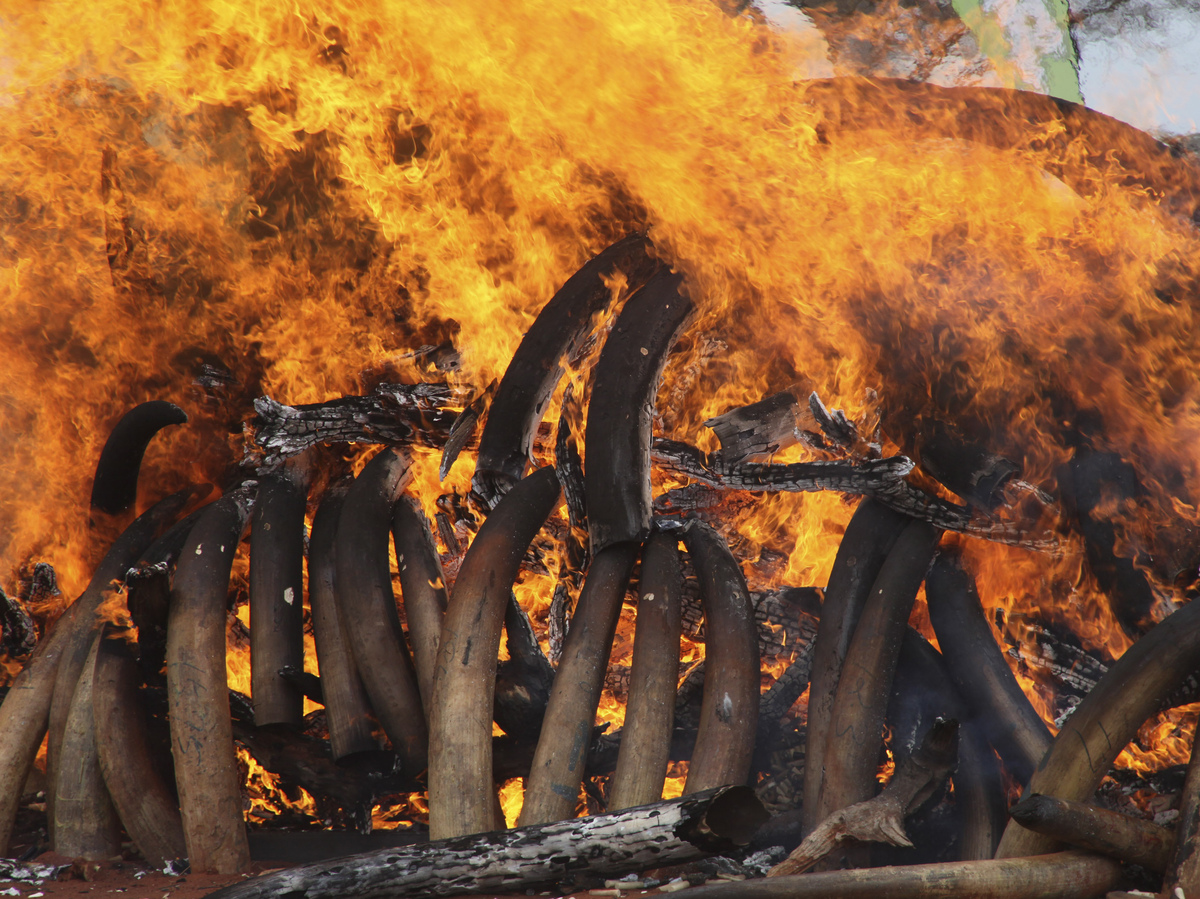 Craig and other conservationists in Kenya still recall a pivotal moment in 1989 when Kenya curbed the appetite for a different poachers' trophy. On that June day, when Kenya's then-President Daniel arap Moi set aflame 12 tons of elephant tusks confiscated from poachers, ivory had been trading legally at nearly $200 a pound.

"The idea was to send a very strong message to the world that ivory had no value," says Winnie Kiiru, a trustee of the Kenya Wildlife Service. "That a Third World country was setting alight all this? It made no sense. It made absolutely no economic sense."

It made no economic sense, and that was precisely the point, broadcast to television screens around the world: No one has a right to ivory except elephants. After the burn, ivory sales slumped. Among buyers, who were then mostly European and American, it became less cool to flaunt ivory belt buckles and cufflinks. CITES banned the trade three months later. And over the following decade, Kenya's elephant population began a slow climb back from the brink of extinction. USA Today named the burn one of the conservation milestones of the 1980s, up there with scientists finding a hole in the ozone layer.

Now, 24 years later, there's an internal memo circulating the halls of Kenya's government proposing to dehorn some of Kenya's rhinos and set those horns ablaze. So as South Africa is inching toward a proposal to legalize the trade and provide seller incentives, the Kenyans are contemplating a symbolic act intended, in essence, to shame the buyer.

Africa as a continent can't go down both paths at once. If South Africa is allowed to market — and advertise — its rhino horn, Kenya can't succeed in discouraging demand. You can't legitimize a trade and at the same time say it's wrong.

Underlying this drug-policy debate about animals is a philosophical gulf about the best way to influence human behavior. Neither side really knows what would happen if you could legally buy a packet of rhino horn in the pharmacy like Tylenol. Would the poachers go out of business, or would they become more audacious, laundering their stolen horn as legitimate? Would we ever be able to see a rhino in the wild again? "If the world at large is happy about rhino sitting in pens and farmed for their horns, then the economists are right," says Craig, the conservationist. "If the world wants wild, free-ranging rhino, then the economists are wrong."

There is one more proposal, so radical that no government will put its name behind it.

Proposal No. 3: Poison It

An organization called the Rhino Rescue Project will, for a fee, come to your land or conservancy and use a "patented process of high-density infusion" to put poison in your rhinos' horns. It won't harm the animal but will make any person who ingests it "seriously ill." As a caveat emptor, they paint the horn with indelible ink, a warning label for any would-be poacher or airport security officer alerted to the meaning of its bright pink color.

It's not surprising that African governments will not support the contamination of horns that people eat, however misguidedly, as medicine. But some private landowners in South Africa and Namibia have poisoned their rhinos' horns. They're willing to let the hazards of poaching trickle down to the consumer.