Accessibility links
When A Country Doesn't Trust Its Banks (In 4 Gifs) : Planet Money Like a lot of people in Myanmar, Swe Win doesn't trust the country's banks. So he keeps most of his money in a diary, and carries it with him wherever he goes.

Swe Win, who works as a translator and journalist in Myanmar, keeps most of his money — roughly $1,800 in Singaporean and U.S. Dollars — in a diary. He carries it in his backpack wherever he goes.

That's because he doesn't trust Myanmar's banking system. He'd rather keep his cash with him at all times than to put it into a bank account here. (He does have a bank account in Singapore). 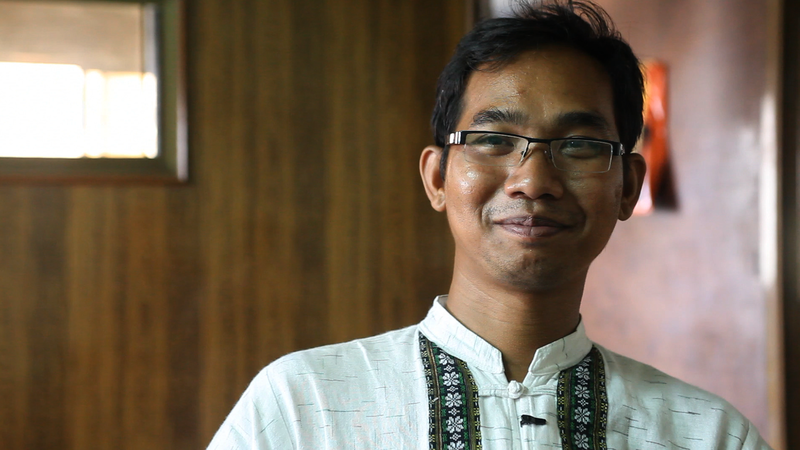 Lots of people in Myanmar, formerly known as Burma, don't trust the banking system and don't have bank accounts. As a result of this and other factors, the banks don't have much money to lend to people and small businesses, which in turn slows economic growth — and means fewer people have money to deposit in banks.

"There's been great distrust in financial assets of any kind," said Sean Turnell, an economist at Macquarie University in Sydney who has been studying Myanmar for 20 years. That is largely due to the junta's historic mismanagement of banks - as well as their mismanagement of many other financial instruments, like monetary policy and exchange rates. "Burma is almost a poster child for economic mismanagement," Turnell says.

Now, Myammar is transitioning to democracy — and the financial system seems to be improving. When you go to a bank in Rangon, the capital, you see a clear sign of trust: People bringing sacks of cash to deposit at the bank.

This branch of CB Bank recently had to expand its bank teller area to keep up with a growing number of customers. And late last year, the bank became the first in Myanmar to install ATM machines that accept international cards. "Working with international brands will definitely also boost local confidence in our bank," Zaw Myo Oo, a business development manager at the bank, told me.

Still, the country's banking system remains unstable and little used. Most people still use cash for everything from groceries to rent. Constant electricity outages and erratic Internet connections mean that ATM machines often don't work. And, just a few months ago, rumors that a bank chairman had been arrested set off another bank run.

And Swe Win is finally thinking about having a bank account in Myanmar. That's mostly because he nearly lost all his savings in a robbery a few weeks ago.

Note: These gifs are made with footage we shot while reporting in Myanmar.