Accessibility links
In A Single ATM, The Story Of A Nation's Economy : Planet Money In Myanmar — a country that's been cut off from the world for decades — it's still a surprise when money pops out of the ATM. That may soon change. 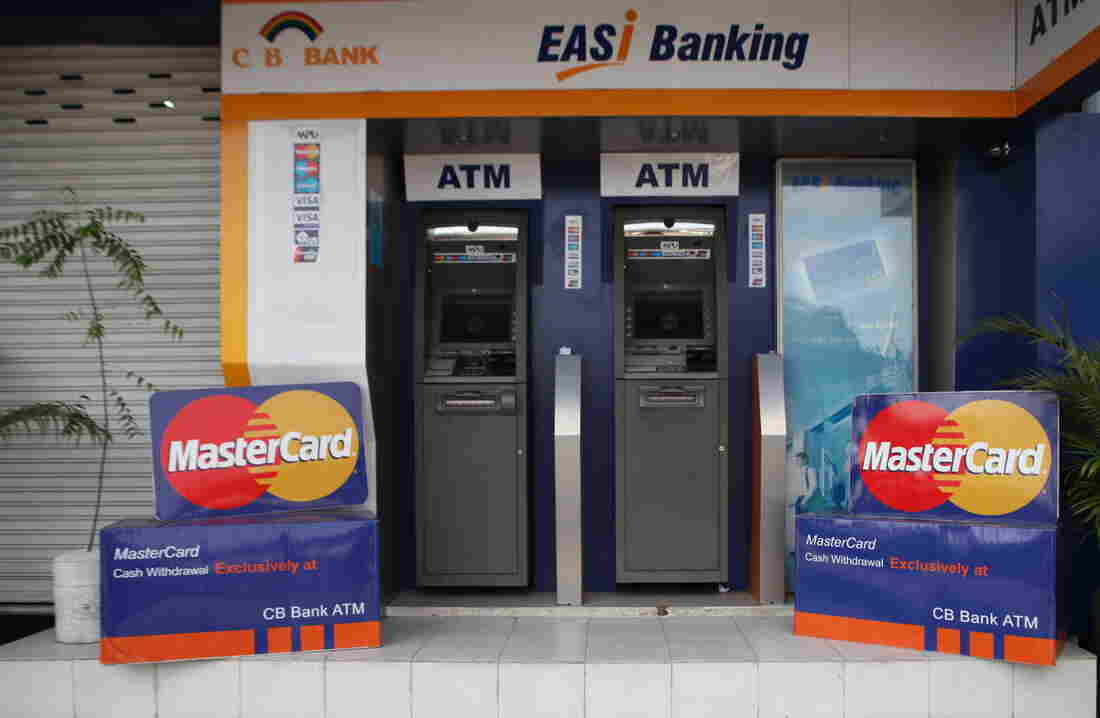 A bank in Yangon recently opened the first ATM in Myanmar that's connected to the rest of the world. Lam Thuy Vo / NPR hide caption

Nan Htwe Nye works at an elementary school in Yangon, Myanmar. She started trying to use ATM machines a few months ago, and things haven't been going so well.

The machines are often broken, she says. "But," she adds, "we hope it will better in the future." This is, more or less, the story of ATMs — and of banking in general — in Myanmar.

She's visiting the headquarters of CB Bank, at the first ATM in the country that was connected to banks all around the world.

The lobby of the bank is packed with people, many of whom have brought cash from their businesses in giant rice bags. One of the managers here, Zaw Myo Oo, says the customers all want to see the transaction on paper.

Another room is all money counting machines, with cash piled in the corners like old newspapers. Burly guys lift bags onto their shoulders.

This all-cash economy is one of the things that is holding back Myanmar's economy. The rest of the world no longer operates on rice sacks filled with paper money. For years, the managing director at the bank wanted to move into electronic banking. But, because there was international sanctions against the military dictatorship that was running the country, Visa and Mastercard wouldn't return his calls.

The sanctions started to be lifted last year, and Mastercard started taking his calls. And late last year, CB Bank fired up the international ATM, complete with a generator to keep the machine running during Yangon's frequent power outages. Over the next few months, the bank installed dozens more machines, and other banks followed.

But the people in Myanmar still don't trust the banks. During the era of the dictatorship, there were frequent runs on the banks, and corruption was widespread. "Sometimes you have to bribe the staff at the counter to get your money back," says Zeya Thu, a business columnist with a local paper. Numbers are hard to come by, but it's estimated that fewer than 10 percent of the people here have accounts.

The people running CB Bank hope the new ATM prominently displayed outside their bank will help build that trust. Nan Htwe Nye, the woman who works at a local elementary school, actually seemed surprised when her money popped out of the machine.