Accessibility links
Pop Stars And The Rise Of Inequality In America, In 2 Graphs : Planet Money What ticket sales tell us about what's driving the gap between the 1 percent and everybody else.

"The music industry is a microcosm of what is happening in the U.S. economy at large," Alan Krueger, on of President Obama's top economic advisers, said yesterday. "We are increasingly becoming a 'winner-take-all economy' ..."

Krueger, who once wrote a paper called Rockonomics, was speaking at the Rock And Roll Hall of Fame. He used the occasion to talk about how top earners are taking a bigger share of the pie in both the live-music business and in the economy at large — and for many of the same reasons. 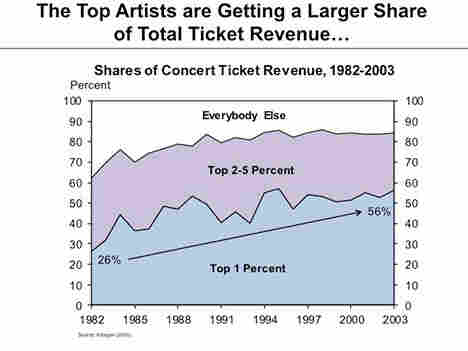 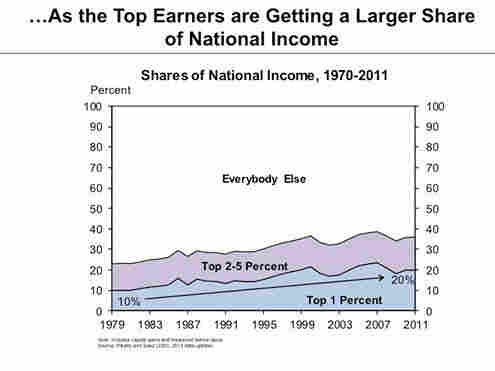 A more globally connected economy increases the reach of successful entrepreneurs and artists, but also brings many more low-wage workers into competition with our workforce.

Technology (for the broad economy):

But advances in technology have also had an unexpected effect. Recorded music has become cheap to replicate and distribute, and it is difficult to police unauthorized reproductions. This has cut into the revenue stream of the best performers, and caused them to raise their prices for live performances.

Changing norms around fairness (in the broad economy):

The notion that profitable companies should share some of their success with their workforce used to be ingrained in U.S. companies. Earlier studies have found that companies and industries that are profitable tend to pay all of their workers relatively well, the managers as well as the janitors. In economics we call this "rent sharing". While this is still the case, the practice has been eroded.

...many artists have been reluctant to raise prices to what the market will bear for fear of garnering a reputation of gouging their fans. ...

Now, as inequality has increased in society in general, norms of fairness have been under pressure and have evolved. Prices have risen for the best seats at the hottest shows – and made it possible for the best artists to make over $100 million for one tour – but this has come with a backlash from many fans who feel that rock 'n roll is straying from its roots. And this is a risk to the entire industry.