Accessibility links
Airline Chart Calls Mergers 'The New Holy Grail' : Planet Money The federal government has filed suit to block the merger of American Airlines and US Airways. The complaint includes a US Airways chart that showing the recent wave of airline mergers. 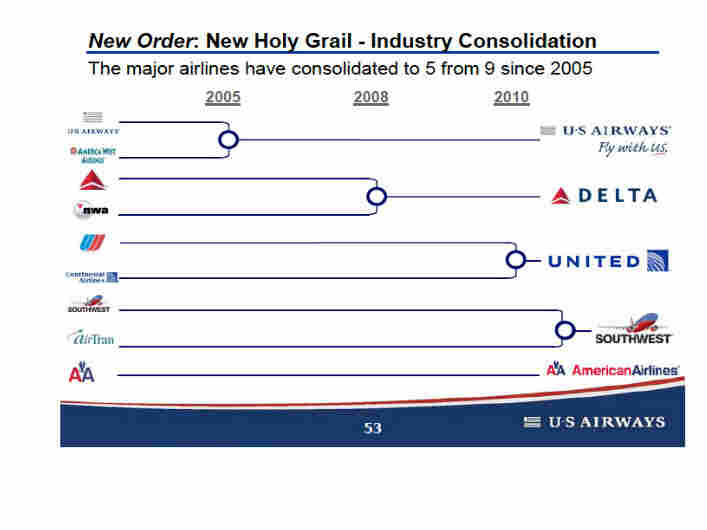 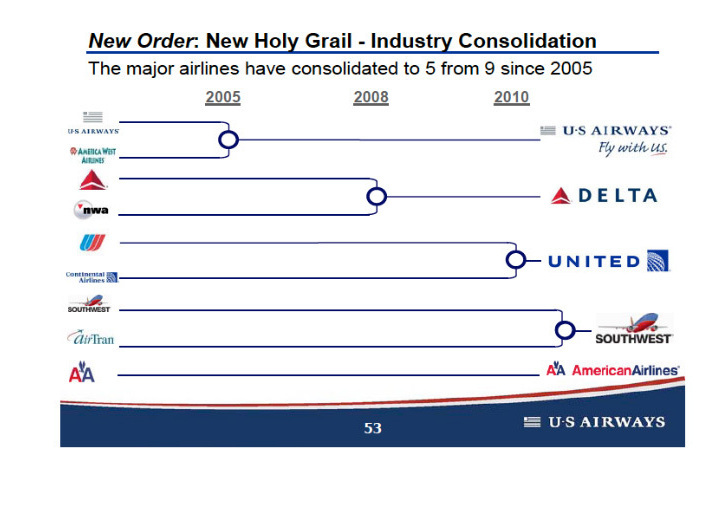 A chart the DOJ cites in its complaint to stop the proposed merger of US Airways and American Airlines.

U.S. and Plaintiff States v. US Airways and American

The government has filed suit to block the merger of American Airlines and US Airways. The Antitrust Division of the Department of Justice says the merger "would create the world's largest airline and leave just three legacy carriers remaining in the U.S. [which] would substantially lessen competition for commercial air travel throughout the United States."

Three legacy carriers instead of four does sound bad for competition, but the lower number alone isn't enough for the DOJ to make its case. To block the merger, the DOJ needs to prove that it would cause "adverse competitive effects" — in other words, that it would reduce competition in a way that's bad for consumers.

The DOJ obviously can't predict the future, so when they're analyzing a merger like this, they look for evidence that suggests the merger will hurt competition. Here is some of what they say they found when looking at the potential merger of US Airways and American Airlines:

1. Past industry mergers have caused prices to increase, and US Airways has applauded that.

US Airways has cheered these successive mergers, with its CEO stating in 2011 that "fewer airlines" is a "good thing." US Airways' President explained this thinking that same year: "Three successful fare increases – [we are] able to pass along to customers because of consolidation." ... . Similarly, he boasted at a 2012 industry conference: "Consolidation has also . . . allowed the industry to do things like ancillary revenues [e.g., checked bag and ticket change fees]"...This merger positions US Airways' management to continue the trend—at the expense of consumers.

The complaint also includes a chart (above) from a US Airways' executive vice president, which refers to consolidation as the "New Holy Grail."

2. US Airways is a maverick that plays a "disruptive role" in the market, forcing their competitors to lower prices.

But American, Delta, and United frequently do charge lower prices for their connecting service on routes where US Airways offers nonstop service. They do so to respond to US Airways' use of Advantage Fares on other routes....Advantage Fares have proven highly disruptive to the industry's overall coordinated pricing dynamic.

3. US Airways and American Airlines have "substantial head-to-head competition" and that's a good thing.

US Airways called American's growth plan "industry destabilizing" and worried that American's plan would cause other carriers to react "with their own enhanced growth plans . . . ." The result would be to increase competitive pressures throughout the industry. After the merger, US Airways' current executives—who would manage the merged firm—would be able to abandon American's efforts to expand and instead continue the industry's march toward higher prices and less service.

....that enhanced cooperation is unlikely to be significantly disrupted by Southwest and JetBlue, which, while offering important competition on the routes they fly, have less extensive domestic and international route networks than the legacy airlines.

In a statement today, the companies said they "intend to mount a vigorous and strong defense."

We believe that the DOJ is wrong in its assessment of our merger. ... Blocking this procompetitive merger will deny customers access to a broader airline network that gives them more choices.

For more about how the antitrust division analyzes mergers listen to this show, Episode 438: Mavericks, Monopolies And Beer.

To hear more about the troubles plaguing the airline industry, check out this one: The 'Nasty, Rotten' Airline Business.