Accessibility links
Robin Thicke's Song Sounds Like Marvin Gaye. So He's Suing Gaye's Family. : Planet Money Thicke wants the court to rule that his song, "Blurred Lines," doesn't infringe on Marvin Gaye's "Got to Give It Up." 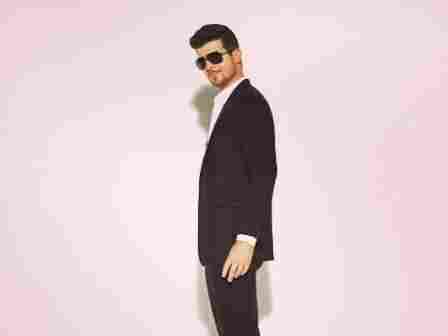 This is Robin Thicke. . hide caption

"Blurred Lines," this year's song of the summer*, sounds a lot like Marvin Gaye's "Got to Give It Up," one of the songs of the summer of 1977.

Members of Marvin Gaye's family have reportedly been asking for a cash settlement and threatening to sue, according to the Hollywood Reporter, which broke the story.

The first paragraph on the complaint manages to both praise Gaye and brag about the success of Blurred Lines (emphasis ours):

Plaintiffs, who have the utmost respect for and admiration of Marvin Gaye ... reluctantly file this action in the face of multiple adverse claims ... Defendants continue to insist that plaintiffs' massively successful composition, 'Blurred Lines,' copies 'their' compositions."

The basis of the Gaye defendants' claims is that "Blurred Lines" and "Got To Give It Up" "feel" or "sound" the same. Being reminiscent of a "sound" is not copyright infringement. The intent in producing "Blurred Lines" was to evoke an era. In reality, the Gaye defendants are claiming ownership of an entire genre, as opposed to a specific work ... .

For more Planet Money on music, listen to our recent show, Top Of The Charts (Econ Remix).