Accessibility links
What Happens When Stores Let Customers Return Whatever They Want? : Planet Money L.L. Bean has taken back a live Christmas wreath that had turned brown and a shirt ripped by a rescue crew after a car accident. Is that any way to run a business? 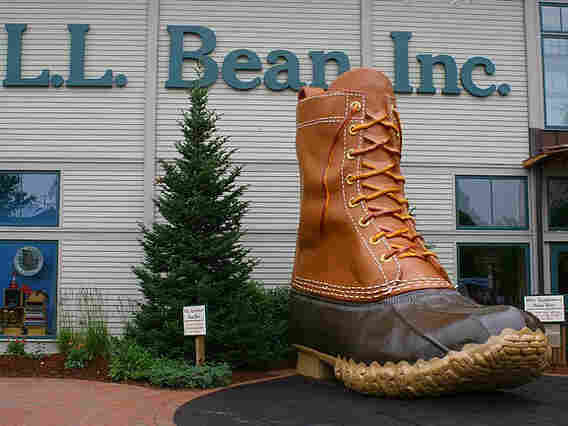 I'd like to return one boot? Bugsy Sailor/Flickr hide caption 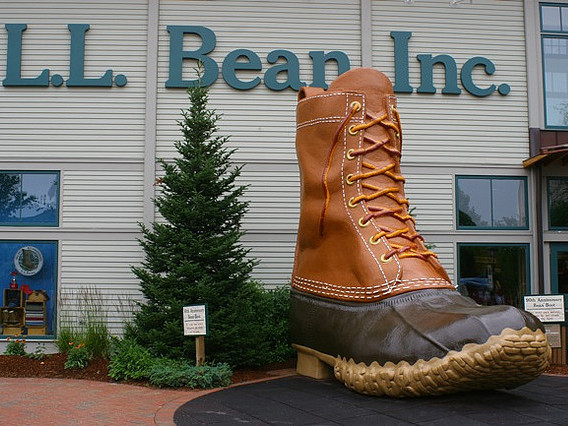 Sunny Pettinati walked into the L.L. Bean store in Yonkers, N.Y., clutching a plastic bag and looking a little embarrassed.

"I'm returning a sweater that I purchased, I think, about 10 years ago," she said.

The sweater had sat in a drawer, unworn, for years, and she was trying her luck with the store's famously lenient return policy.

It turned out to be painless. A few taps on the keyboard, and the saleswoman handed her a gift card worth the full value of the sweater.

L.L. Bean has an astonishingly lenient return policy. The company has taken back a live Christmas wreath that had turned brown and a shirt ripped by a rescue crew after a car accident. My own Planet Money colleague, Lisa Chow, has been returning her L.L. Bean backpacks for two decades whenever a zipper breaks. She's gone through three or four backpacks this way. Every time, they send her a new one free.

I asked Steve Fuller, L.L. Bean's chief marketing officer, if Lisa was gaming the company's system. He was a model of nonjudgment. "If she believes her zippers should last a longer time, we'll respect that and we'll refund her money or give her a new product until she's happy," he said.

L.L. Bean customers seem more worried than Fuller about the return habits of their fellow shoppers. "A customer will come to the desk after watching a return, and she or he will say: 'I can't believe you're taking this back. I hope these people aren't ruining it for the rest of us,' " Fuller said.

L.L. Bean competitor REI used to have a return policy like L.L. Bean's. "I've seen some 15-year-old shoes that went directly into the trash in a toxic waste bag," Tim Spangler, REI's senior vice president for stores, told me.

But REI began to worry it was getting a reputation as a sucker. Customers started giving it nicknames like "Rental Equipment Inc." "Rent Every Item" was another. Some called it "Return Every Item."

Two years ago, REI noticed that the number of people returning really old stuff was increasing. Some customers talked about their returns on social media, which led to even more people bringing in their old junk to get refunds. It was hurting profits.

After intense debate and customer surveys, Spangler and his team unveiled a new policy: From now on, you get only a year to return your stuff.

"I don't want to be in the business of looking somebody in the eye behind the counter and questioning the morality of their return," Spangler said. "I want to be able to say, 'Look, it's outside the confines of what we agreed upon when you bought it, or it's within it, and we're going to take care of you,' and leave it at that."

For his part, Fuller of L.L. Bean says his company is sticking to its policy. He says he's never been in a meeting where someone questioned the value of the guarantee. The only question he gets is whether the company talks about it enough.

If anything, L.L. Bean seems to be welcoming the customers REI might be willing to let go. Behind its store counters, the guarantee is written in giant text. And there are a few reasons why this may be better business for L.L. Bean. Many of its sales are mail order, so it's less convenient for customers to return stuff. And, Fuller says, the crazy return stories are great marketing for the company.

"How many times has your colleague talked about the fact that she's returned that backpack, and L.L. Bean gave her a new one without question?" Fuller said. "That's really the value of the guarantee."

As a business practice, it's expensive. As advertising, it's cheap.