Accessibility links
Models, Rules And High School Dropouts: A Guide To The Economics Nobel : Planet Money Favorites to win this year's prize include economists famous for work on education and income, regulation, and economic modeling.

Models, Rules And High School Dropouts: A Guide To The Economics Nobel

Models, Rules And High School Dropouts: A Guide To The Economics Nobel 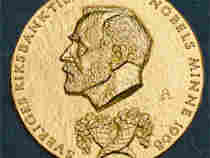 While a few gamblers bet real money on potential Nobel Prize winners, at Planet Money we're content to merely speculate. We're particularly interested in who might win the economics prize, which will be announced Monday morning.

The good folks at Thomson Reuters are interested, too. Each year, Reuters publishes a closely watched list of predictions about who might win. Since 2002, this list has successfully predicted the eventual economics laureate(s) five times. This year, it named three groups of economists as favorites.

Intuitively, it's easy to think that people with more education are likely to make more money. But actually proving that more education causes people to have higher average incomes is hard.

So if you're an economist interested in this relationship, what do you do?

The clearest way to answer the question would be to take a bunch of people and randomly assign them to stop going to school at different points in their education, then see how much money they make over the course of their careers. But of course you could never do this in the real world.

In 1991, though, Angrist and Krueger came close. They found a large group of people in which a single, basically random trait directly resulted in more or less schooling: their birthdays.

For decades, children across America had to enter school the year they turned 6 and could not drop out until they turned 16. So among people who dropped out of high school at age 16, those with birthdays later in the year would get a bit more schooling than those with earlier birthdays.

Angrist and Krueger found that, among people who dropped out at 16, those with birthdays later in the school year went on to earn higher wages than those with earlier birthdays.

The finding was interesting. But perhaps even more important was the way Angrist and Krueger managed to find real data in the real world that went a long way toward proving causality. Card is in this group because he used similar techniques, seeking out real-world evidence to try to answer important questions.

Richard A. Posner and Sam Peltzman

And businesses often push for strict licensing rules that make it harder for would-be competitors to enter the field, Posner and Peltzman have each found. (Last year, we reported on the hundreds of hours of schooling required to braid hair in Utah.)

More broadly, Posner and Peltzman have written that it makes sense to think about rules and regulations in terms of costs and benefits — an argument that's been widely influential. Peltzman also has an effect named after him: "the Peltzman effect," which states that safety regulations make people engage in more risky behavior. Seat belt laws make people feel safer, so they drive faster, Peltzman argued.

A policymaker says the economy will grow. A financial analyst says a company's revenue will rise or fall. A baseball stats guy brags about how well his team is going to do over a season. All these guys are basing their predictions on forecasting models.

In economics and statistics, models are systems of relationships between different sets of data. The problem with these relationships is that they're unwieldy, messy and, if used incorrectly, wildly incorrect.

Hendry, Pesaran and Phillips figured out how to make models work better.

Correction: An earlier version of this post misspelled Angrist's name. Thanks to the commenter who pointed out the mistake.