Accessibility links
Two Sisters, A Small Room And The World Behind A T-Shirt : Planet Money The rise of factory jobs in Bangladesh has brought profound cultural changes to the country — and to the lives of two sisters who made the Planet Money T-shirt. 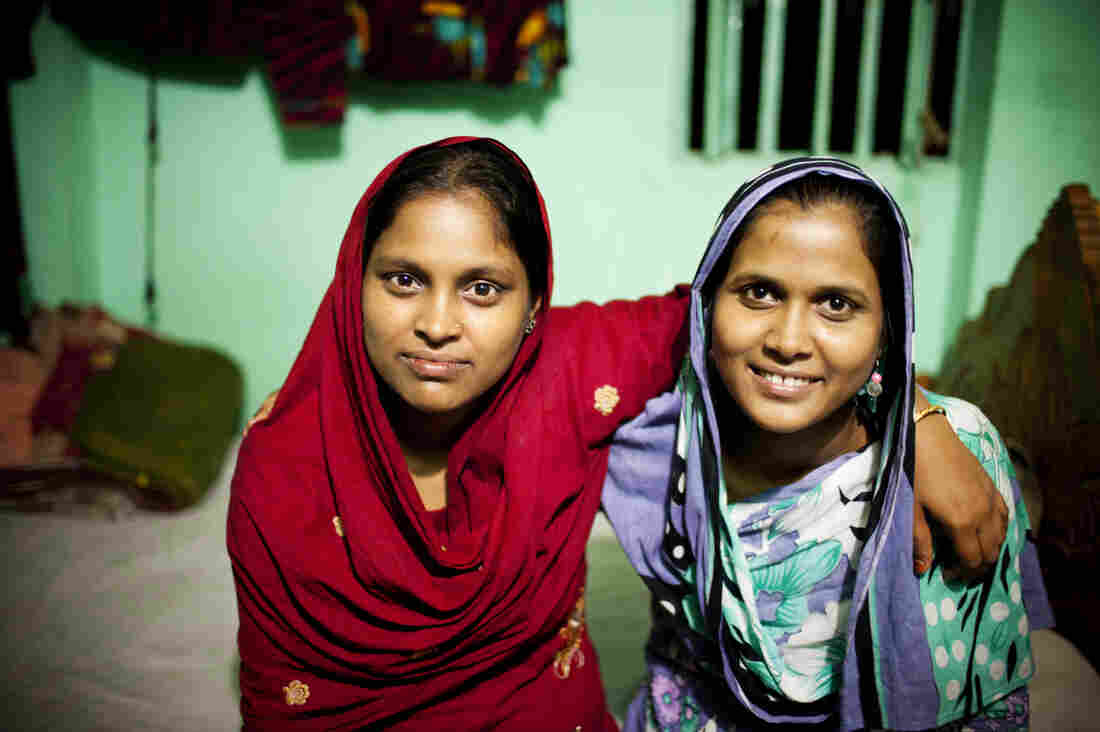 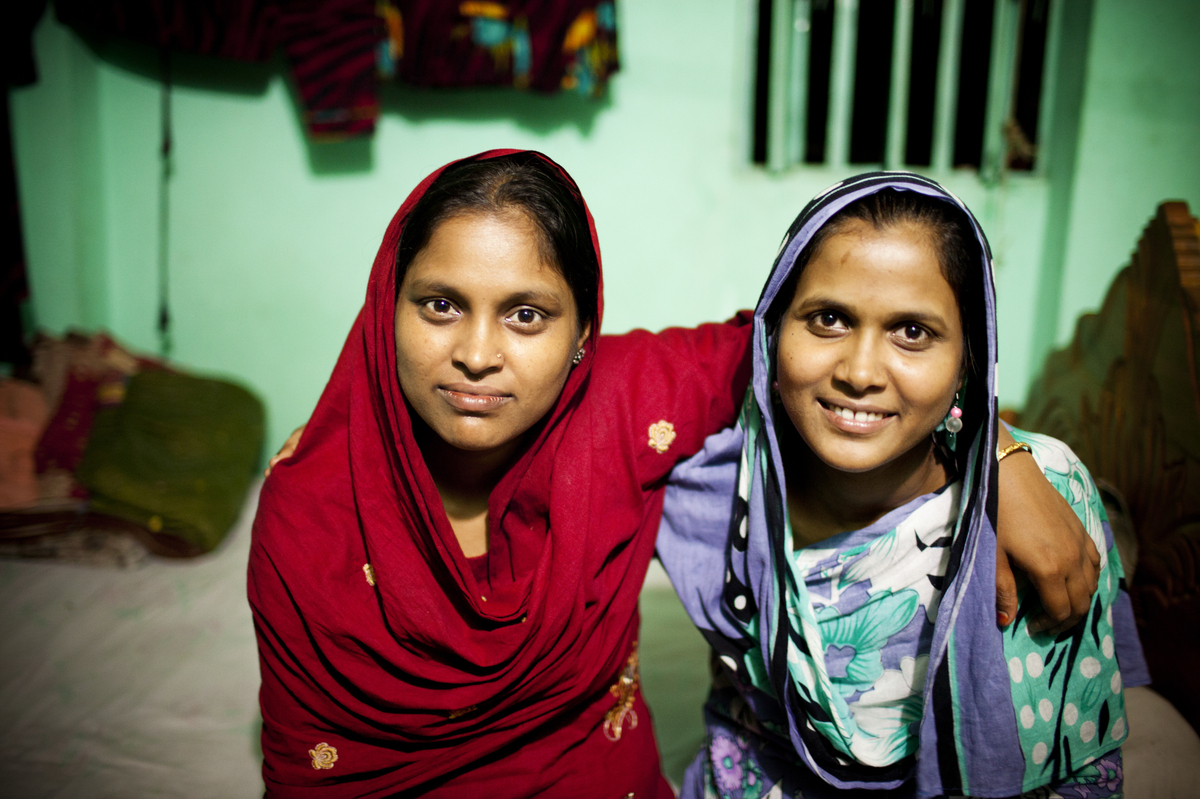 This is the story of how the garment industry is transforming life in Bangladesh, and the story of two sisters who made the Planet Money T-shirt.

Shumi and Minu work six days a week operating sewing machines at Deluxe Fashions Ltd. in Chittagong, Bangladesh. They each make about $80 a month. 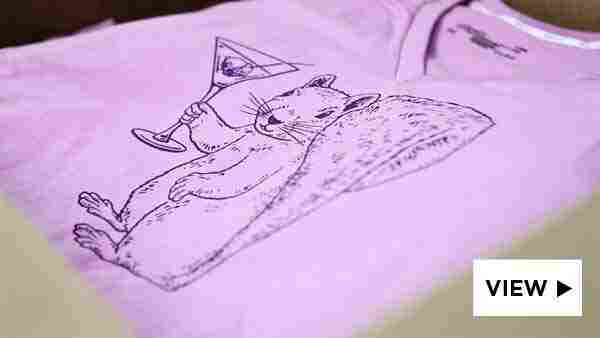 To get to the small room that the sisters share with Minu's husband, you squeeze between two buildings, make your way along the wall, and spill out into a little neighborhood of boxlike rooms, all crammed on top of each other. Their room is upstairs, under a tin roof.

There's no running water in their room, and no kitchen. There's a TV, which Minu bought with the money she earned sewing clothes. There's also the box the TV came in, which takes up scarce shelf space in the small room. Minu was so proud of her purchase, she couldn't bear to throw the box away. "I feel too good when I think about it," she says, with a quick smile.

In the past decade, millions of Bangladeshis have started working in the garment industry. Many of them are like Shumi and Minu: They grew up in villages where conditions are even worse than they are for factory workers in the city.

When Shumi and Minu were growing up, sometimes there wasn't enough food to eat. They had three younger sisters who all died before they were 7. Now, Shumi and Minu are able to send money home. It isn't much, but it makes a big difference in the village.

"Now, we can eat whatever we want," their mother says. Their parents have built a new house, made of brick, to replace their old, bamboo house. And their younger brother can stay in school.

The rise of factory jobs in Bangladesh has brought profound cultural changes to the country as well. You can see the shift in just the few years that separate Minu and Shumi.

Minu, the older sister, is in her mid-20s. (The sisters aren't sure of their exact ages.) She's cynical and chews tobacco wrapped in betel leaf. 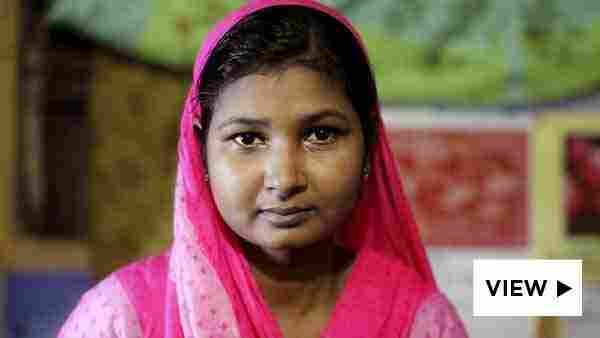 PLANET MONEY MAKES A T-SHIRT: The Lives Of The People Who Made Our Shirt NPR hide caption

Minu has a 7-year-old daughter who lives back in the village with her grandparents. "I miss her," Minu says through a translator. "If she were here now, I'd be putting little clips in her hair." But there's nobody to watch Minu's daughter while Minu is at work here in the city.

Shumi, who is about 19, is Minu's opposite. Where Minu is reserved, Shumi is bubbly. Where Minu is serious, Shumi smiles. She loves her makeup and spends time doing her hair. It's hard for her to get through a story without laughing.

Minu's father married her off when she was a teenager, following the local tradition. An unmarried daughter "becomes a big burden," her father told us. "I have to spend money on their food and lodging."

Minu and her husband fight a lot. He goes through her phone and accuses her of cheating with the men she works with. She's a little scared of him. "I'm not capable to forgive my parents," Minu says. "They just destroyed my life."

By the time Shumi was a teenager, the rules of life in Bangladesh were changing. Rather than get married off, Shumi dropped out of school to go work with her sister in a factory.

Shumi's personal life is nothing like Minu's. Shumi has her own savings account. She has a boyfriend. Back in the village, her family would never let her talk to a boy who wasn't a relative. But here on her own, she takes rickshaw rides with her boyfriend. They hold hands; he tells her he loves her.

And, Shumi says, she won't consent to an arranged marriage like her sister's. "If I marry someone, then it should be my boyfriend," she says.

This is the world behind our T-shirt: three people in a small room dreaming of a better life. But for Minu and Shumi, this little room with the TV may be as far as they get. There aren't many jobs outside the garment industry, especially for women who dropped out of school.

Minu's dreams now are for her daughter. She's hopeful that her daughter can stay in school. She dreams that when her daughter grows up, there will be all kinds of jobs in Bangladesh. Maybe her daughter could work in an office, she says, or a bank — but not in a garment factory.