Accessibility links
A Bet, Five Metals And The Future Of The Planet : Planet Money Decades ago, amid fears of rapid population growth, a biologist and an economist made a bet about how many people the planet could sustain. Global population is now estimated to top 7.1 billion. So who won the famous bet?

This famous bet — between a biologist and an economist — was over population growth. It started three decades ago, but it helped set the tone for environmental debates that are still happening today.

The biologist at the heart of this bet was Paul Ehrlich at Stanford. He wrote a best-selling book in 1968 called The Population Bomb. It was so popular he appeared on The Tonight Show with Johnny Carson.

He told Carson, "There are 3.6 billion people in the world today, and we are adding about 70 million a year. And that's too many. The very delicate life support systems of the planet, the things that supply us with all of our food, with ultimately with all of our oxygen, all of our waste disposal are now severely threatened." 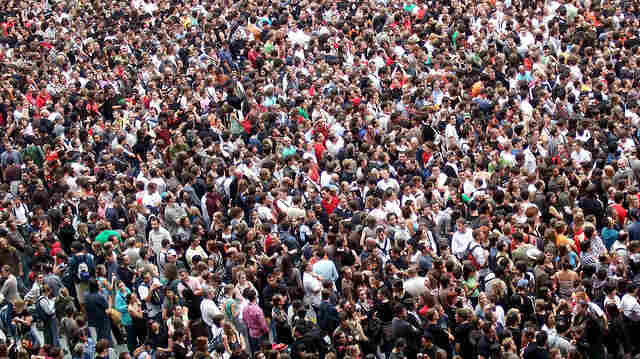 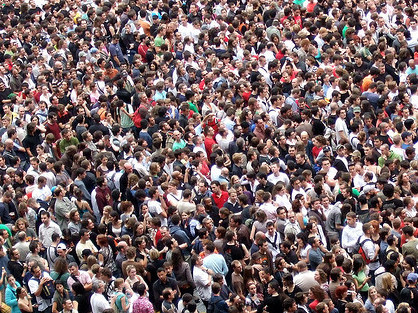 Despite Ehrlich's sobering message, Carson had him on 20 times.

The guy on the other side of the bet, the economist Julian Simon, didn't buy Ehrlich's argument. Simon didn't see the growing population as a catastrophic problem. He explained that we are not like any other species. We have an economy and markets. So, according to Simon, if the world demands more oil, the price of oil will go up, and there will be an incentive to find more, or find an alternative.

Both Ehrlich and Simon enjoyed being provocative. Ehrlich started a movement called "Zero Population Growth." He got a vasectomy to set an example. And he proposed a tax on diapers to keep population in check.

Simon took to wearing devil horns on his head when giving talks.

Paul Sabin, a historian at Yale, told the story of this famous bet in his new book The Bet. And Sabin says Simon's side never really got as much notice as Ehrlich's — and that, it seems, is why he proposed the bet.

Simon proposed that they bet on what would happen to the price of five metals — copper, chromium, nickel, tin and tungsten — over a decade.

And the logic was that these metals were essential for all kinds of stuff — electronics, cars, buildings. So, if Ehrlich was right, more people on the planet would mean we would start running out of stuff, and the price of these things should go up.

But, if Simon was right, the markets and human ingenuity would sort things out, and the prices would stay the same or even go down.

And before we get to how the bet turned out, it's worth remembering the context for all this.

The 1970s felt like a time of shortages. TV news showed famines in Africa. And here at home in 1974, there were long lines at gas stations because of conflict in the Middle East.

Those next 10 years, from 1980 to 1990, crept by. The world population grew by 800 million people. Then it was 1990. And they tallied it up. Simon, the economist, decisively won. Prices for the five metals went down by an average of 50 percent.

One of the reasons the prices dropped was just what Simon said. The catastrophe Ehrlich was predicting just did not happen. People invented substitutes, like companies switching from aluminum to plastic for packaging.

But Paul Sabin at Yale says, personally, he worries a lot about the environment. And he wonders if the bet actually poisoned the waters, helping to set the stage for a world where environmental debates are framed by the extremes — one side warning of certain catastrophe, and the other saying everything is going to be great.

In October 1990, the economist Julian Simon was going through the mail at his house. And he found a small envelope from California. Inside was a check from Paul Ehrlich for $576.07. There was no note.