Accessibility links
When does a minimum wage become too high? : Planet Money Does raising the minimum wage kill jobs? No. Not really. But it could. The hunt is on to find the magic number. Here's the evidence. 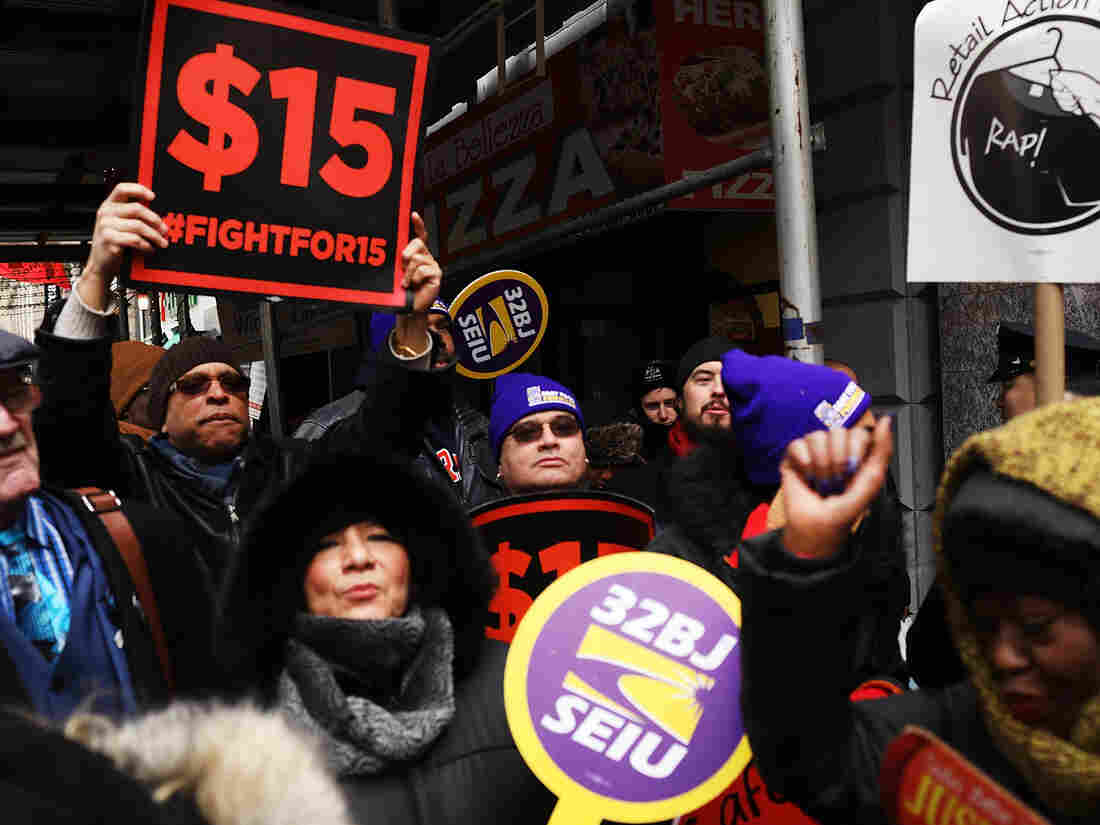 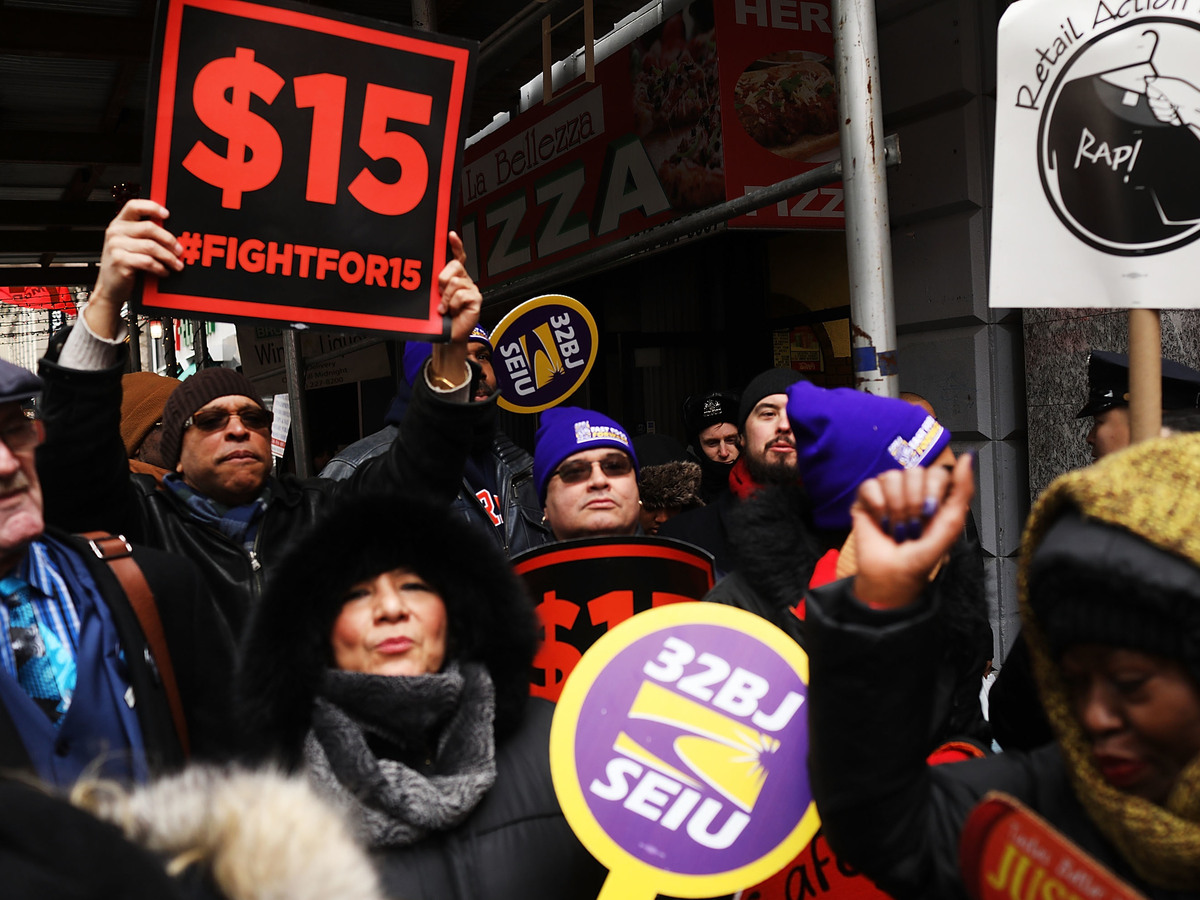 It's a bold idea. It's simple. There's a catchy slogan: "The Fight for 15." Big names are lining up behind it: Bernie Sanders, Elizabeth Warren, Kamala Harris. Even Amazon supports it. But what does the evidence say about a $15 minimum wage? Why $15 exactly? And should it be imposed everywhere, from the rural South to booming coastal cities?

Does Anyone Know What They're Talking About?

For a long time, it was pretty much gospel to economists that the minimum wage killed jobs. Economic theory preached that if you artificially increased the cost of employing people, that would naturally make employers employ less.

In 1994, David Card and Alan Krueger published a study that was an earthquake for this theory. Analyzing fast-food restaurants in New Jersey, they found that a modest 19% increase in the minimum wage did not reduce employment. Since then, study after study has found similar results.

Here's a thought experiment: let's pretend we increased it to $15 thousand an hour. Clearly, employers could no longer afford paying many of their workers. Such a policy would shutter businesses, destroy jobs, and make hamburgers insanely expensive.

The real question is not whether the minimum wage kills jobs, but at what level it starts killing jobs. There's basically a magic number and, given that economies are different, there's no reason to believe that magic number will be the same everywhere.

The Grand Experiment Of A National $15 Minimum Wage

There are many ways to fight poverty and inequality, like taxing the rich and giving to the poor. Research finds a minimum wage is one tool that can help, but where to set it optimally is an empirical question.

The number 15 is nice and round — but why not $14.85? Heck, why not $50 an hour? If we want a minimum wage that maximizes the wages of low-income workers while minimizing potential job losses, we need evidence.

The federal minimum wage is currently $7.25. Raising it to $15 is a 107% increase. Congressional Democrats want to do this in phases and reach $15 by 2024. That said, it's not a modest increase. As far as evidence goes, it puts us largely in uncharted territory.

The first rigorous research project that gave us a sense of what a $15 minimum wage would do centered on the prosperous city of Seattle. Starting in 2015, the city incrementally raised its minimum wage from $9.47 to $15 and beyond, and they commissioned a big fancy study to see how it worked.

When Seattle increased the minimum wage from $9.47 to $11 in 2015, researchers found that, like the Card and Krueger study, there were insignificant effects on employment. Sweet! But — hold your horses — they found the next hike, from $11 to $13 in 2016, did hurt employment.

If you look at the larger group of what we'll call low-wage workers, who make the minimum wage or close to it, they had fewer opportunities. Wages went up, but employers cut back on work hours — so much so that low-wage workers ended up poorer to the equivalent of about $74 per person, per month. A follow-up study found this pain was mainly shouldered by workers without prior experience, who found it harder to get hired. The saga suggests the magic number in Seattle is around $13/hour.

Yet, that's only one study in one city, and it's contentious.

Fine, But What About The Rest Of The Country?

A recent research paper by Arindrajit Dube and colleagues, which analyzes a massive sample of 138 state-level increases in the minimum wage over four decades, confirms those earlier studies that find the minimum wage is not a job killer. That said, most of the increases in the study are what we'd call modest increases, about 10% on average. The increase studied in Seattle was 37%.

But, in our quest to find the magic number, Dube's study may help. Dube believes that when setting a minimum wage, it might matter less what the exact level is and more how it compares to what everyone else is making in the same city or state. His recent study finds states can raise the minimum wage up to 59% of their median wage and not see significant job losses.

Raise the minimum wage beyond this point, however, and you're in a dark abyss of evidence where it's possible that there could be sizable losses. At that point, the costs to low-wage workers could outweigh the policy's benefits. And the bigger the raise, the bigger the risk.

Should Greenbow, Alabama Have The Same Minimum Wage As New York City?

The median hourly wage of the San Francisco Bay Area, for instance, is over $26. Dube says that's why in San Francisco and San Jose, which already have $15 minimum wages, there's not evidence of sizable job losses. In Alabama, however, the median hourly wage is only $15.77. Raising the minimum wage to $15 today would put it at 95% of this level, meaning it will affect a huge percentage of jobs and put Alabama well into that dark abyss where there could be sizable job losses. Alabama's median wage will likely grow before 2024, when Democrats want the $15 minimum wage to take effect, but it's reasonable to believe that even then, the policy could do Alabama's low-wage workers more harm than good.

That's why Terri Sewell, a Democratic Congresswoman from Alabama, is urging caution in the "Fight for 15". Earlier this month, she introduced legislation that has the goal of eventually raising the minimum wage to $15 everywhere, but she wants to raise it at different rates around the country, using a formula that recognizes "that the cost of living in Selma, Alabama is very different than New York City." The evidence has her back that this approach could prevent job losses.