Accessibility links
What's Wrong with the Saudi Aramco IPO? : Planet Money The most profitable company in the world was supposed to make its international debut, listing public shares for the first time at a valuation of $2 trillion. Now it's staying local. What happened? 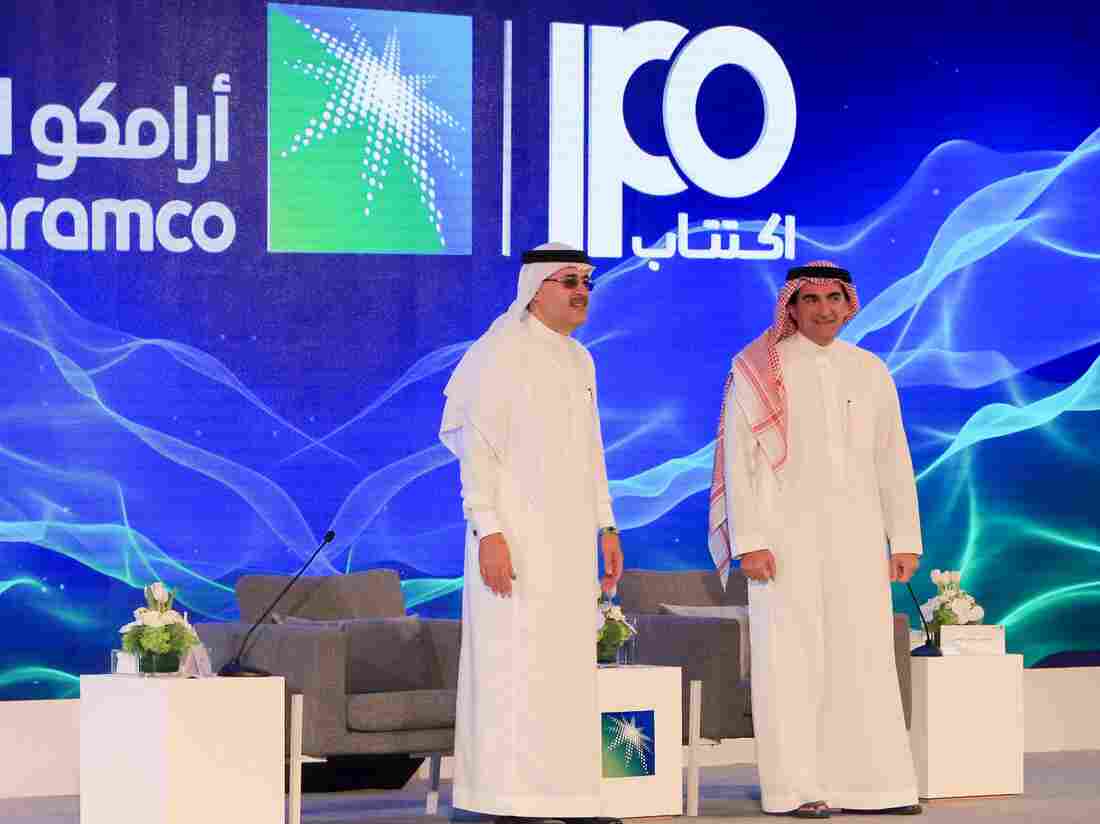 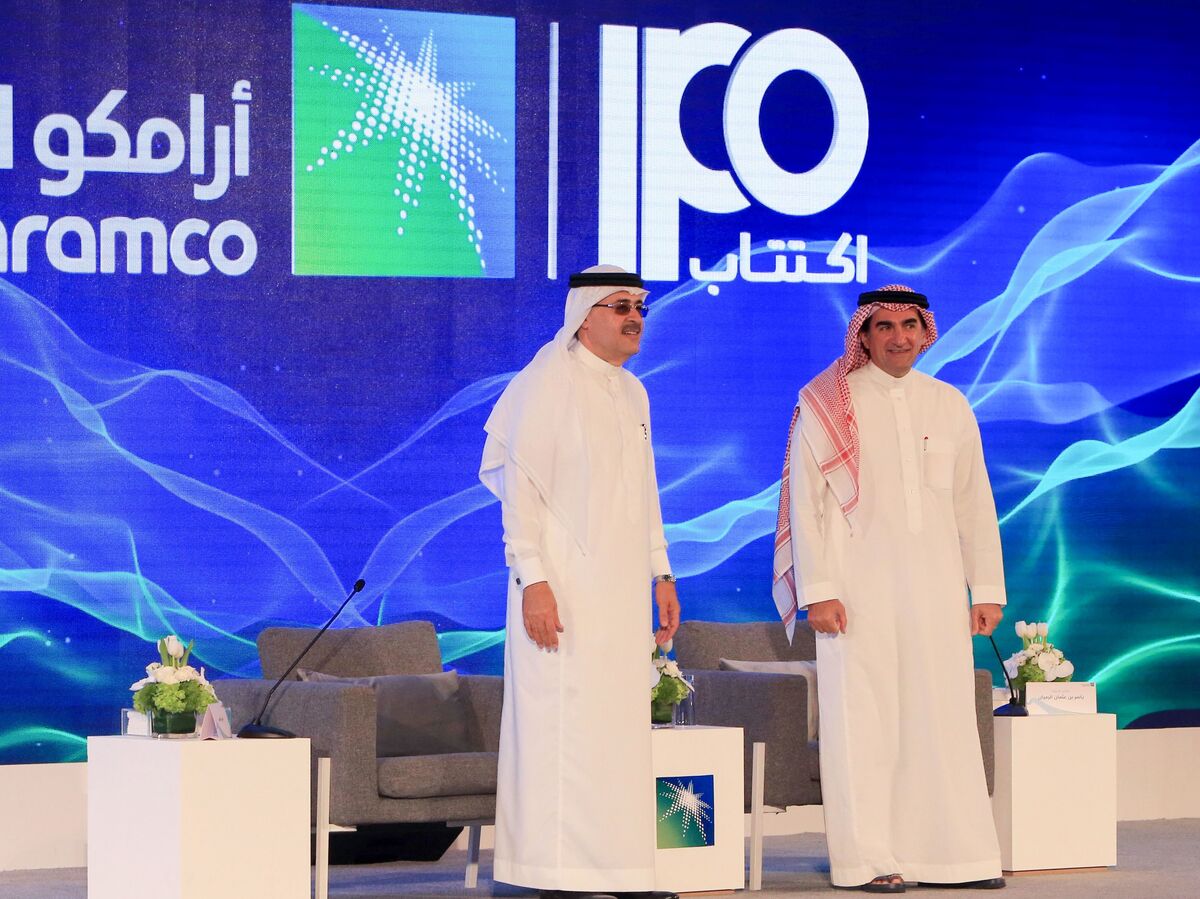 The IPO of Saudi Aramco, the most profitable company in the world, is scheduled to happen as early as next month. It is not going as planned.

The dream of the IPO was to reorient and modernize Saudi Arabia's economy. It was a critical part of Crown Prince Mohammed bin Salman's "Vision 2030" plan, meant to overhaul the country, moving Saudi Arabia away from its reliance on revenue from oil and toward a "modern" framework, with goals from diversifying the economy and advancing technologies to encouraging exercise and creating public/private partnerships in healthcare.

The IPO would dole out Aramco shares to Saudi citizens for the first time, giving them a share in what has long delivered much of the government's funding. But the market has a way of tempering dreams. In the beginning, the listing was supposed to value Aramco at $2 trillion; the Crown Prince had wanted to raise $100 billion by selling 5% of it.

Before we get into what has held Aramco back, a little history. (A very little.) Saudi Aramco began in 1933 when the Saudi government gave Standard Oil of California a concession to explore for oil within the kingdom. It quickly attracted partnerships and investments from companies that would later become Chevron, Exxon, and Mobil.

Aramco was foreign-owned and operated for decades, but in the early 1970s, surging demand for energy met a shortage of supply, exacerbated by the Yom Kippur war and the resulting embargo. Oil-producing countries pushed for more control of the foreign-owned oil corporations operating in their borders. Saudi Arabia owned a 25% stake in Aramco in 1973, then 60% a year later.

Since 1981, Saudi Arabia has owned Aramco outright, insulating it from modern concerns like corporate structure, disclosures, and generally accepted accounting principles. From that vantage, picking a nice, abstract, staggering figure like $2 trillion is understandable.

But it's a difficult transition from a corporate monarchy to the institutional world. Basically every bank in the world pitched to get Saudi Aramco's business, in what the Financial Times called "a quest for bumper fees that saw them overcome queasiness at working for an autocratic regime." The regime, of course, is run by the Crown Prince, who likely commissioned the murder of Jamal Khashoggi, a Saudi journalist and U.S. resident. Landing the IPO meant overlooking that and other human rights violations, as well as credulously claiming that $2 trillion was a reasonable, achievable valuation. More than two dozen banks got the gig, and then had to ferry the dream of $2 trillion outside the Kingdom, presenting it to investors to get them interested in buying the shares.

Foreign investors loved the fat profits, but as the process kicked into gear, an attack on August 17th at Aramco's Shaybah NGL facility took it offline for almost two weeks. On September 14th, its critical Abqaiq and Khurais facilities were also attacked, which reduced crude oil production by about 54% (according to the prospectus for the share sale). By September 25th, production had recovered, but the damage to investor confidence was done.

Investors were put off, too, by a lack of transparency, including around the company's relationship with the government. Aramco operates under a concession agreement; Saudi Arabia owns the land and the oil reserves. Buying into a company that operates on the whim of a government means trusting that government, which is a leap, for reasons not entirely unique to Saudi Arabia.

Foreign investor demand wasn't there, not at $2 trillion. Which left the bankers in the awkward position of having to describe to the company's chairman that the valuation was undeliverable. Predictably, the international banks have been sidelined: only three banks will actually have oversight of investor orders, and two of those are local.

Saudi Aramco is now selling just 1.5% of itself, to raise about $25 billion — for a valuation of $1.7 trillion. After international investors wouldn't play, the process has turned to local investors, at home and in the gulf region.

Some of those being strongly encouraged to buy shares were detained in Riyadh's Ritz-Carlton hotel in 2017, in what Saudi authorities called a crackdown on corruption but others characterized a shakedown, a consolidation of power by MBS.

Those awkward juxtapositions highlight the tension: Saudi Arabia wants to be "modern" and innovative, to engage with the business community, which has demonstrated it's willing to engage back, to an extent, for a fee. They almost had it. But it's crimped, at least in part, by Saudi's unwillingness to be, actually, modern. Saudi Arabia's retreat from its first formal trip into the international market shows that the Vision for 2030 may be very far away.

This article originally speculated that single Saudi women might not be able to purchase shares. But they are not expressly forbidden to do so in the prospectus.