Accessibility links
A Q&A With Esther Duflo, Who Wins Nobel Prize Today : Planet Money Esther Duflo is the first female economist to win the Nobel Prize. Planet Money talks to her about her win, the state of gender inequality in economics, and her new book.

A Q&A With Esther Duflo, Who Wins Nobel Prize Today

A Q&A With Esther Duflo, Who Wins Nobel Prize Today 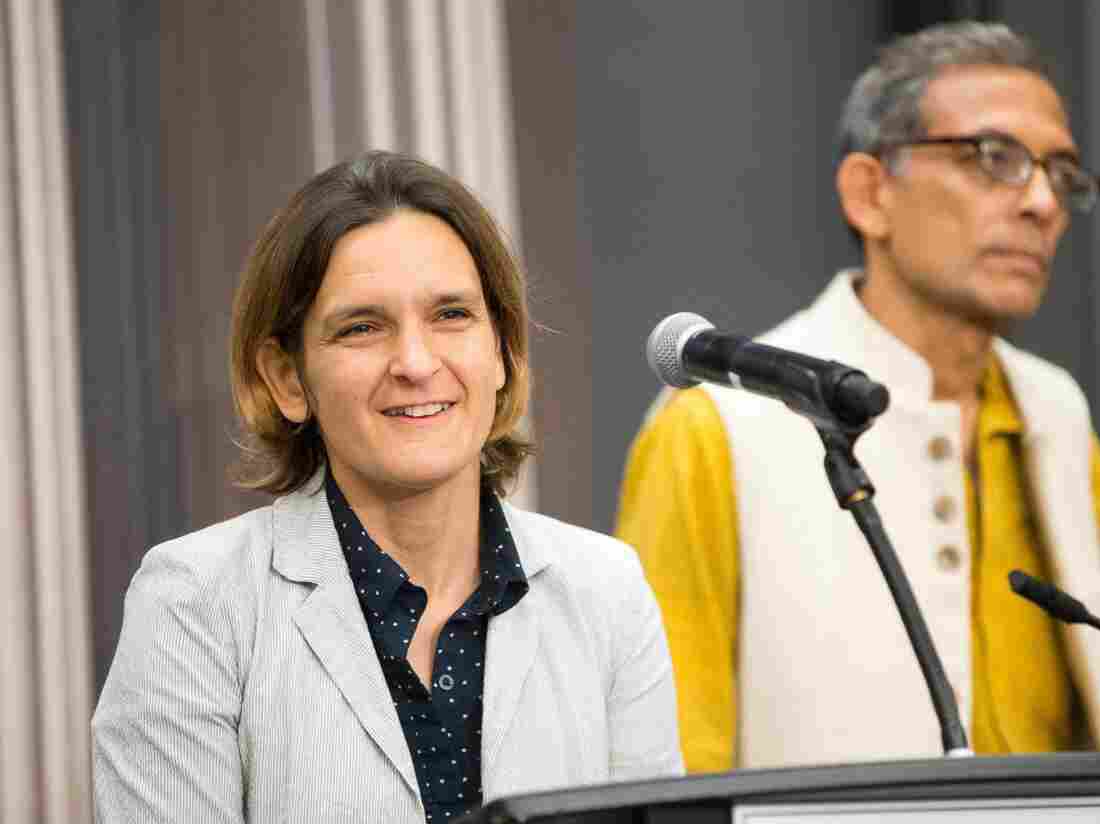 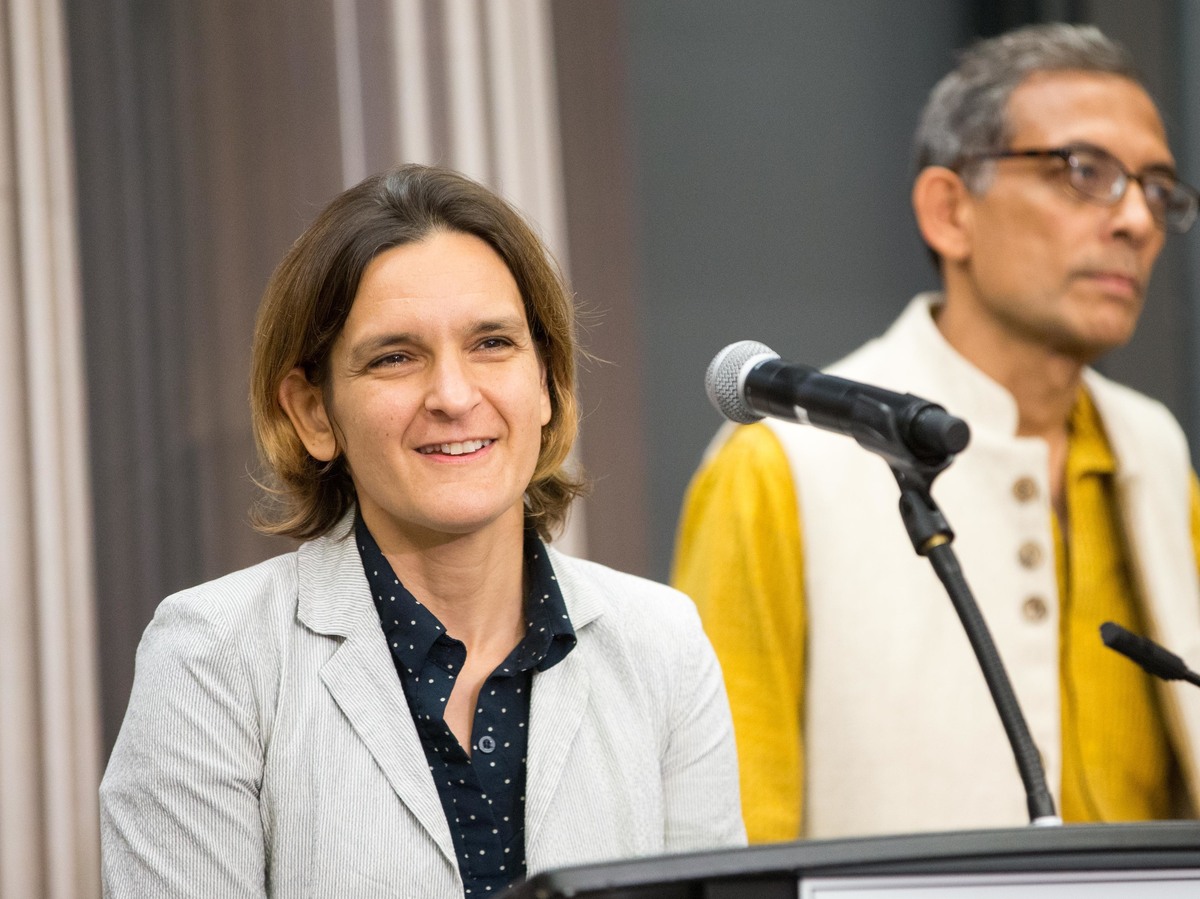 Today in Stockholm, the Nobel Prize Committee will be handing out its awards. Among the recipients is Esther Duflo, the first female economist to ever win the prize. (The only other woman to win it, Elinor Ostrom, was a political scientist). Duflo shares the prize with Michael Kremer and her husband, Abhijit Banerjee. All three are economists who pioneered the use of randomized controlled trials to study the effects of development policies. The Nobel Committee awarded them the prize "for their experimental approach to alleviating global poverty."

We had the good fortune of speaking with Professor Duflo recently.

Congratulations on the Nobel Prize! It's very exciting. I think we'd be accused of journalistic malpractice if we didn't ask you about the story of winning the prize. So what happened?

Well, given that it was a quarter to five, I was peacefully sleeping in my bed. And I got a phone call. So the first reaction when you get a phone call at that time is: "What could be happening?"

I picked up the phone, and then someone told me, "We're really happy to announce that we've awarded you with the Nobel Prize in economics."

And at this point, my first question was, "with whom?" And they said, "Oh, with Michael Kremer and Abhijit Banerjee." And I said, "Oh, you want to talk to him?" (He's my husband). And I gave him the phone. He was also waking up at this time. And then they said, "Well, we need you to be ready for a press conference in 45 minutes. So I suggest you get up, you make yourself a cup of coffee, and you collect yourself for the onslaught."

So you're the youngest person to ever win the Nobel Prize in economics. And while you're the second woman to win it, you're the first female economist to win it. I'm curious, what do you think about the underrepresentation of women among the Nobel Laureates in economics?

Well, I think it comes from the fact that women are underrepresented at all levels of the economics profession. Even among undergraduate students, there are not very many women who make the choice to study economics. Among the undergraduate students, there are fewer women who decide to study for their PhD. And on and on and on. So at all levels we have underrepresentation. And therefore it's quite natural that as you move to prizes and things like that, you also see underrepresentation.

And I think it comes from two things: The first one is a question of climate and culture in the economics profession, which is quite aggressive and macho, and more likely to be I think a little bit repulsive to women than to men. The second reason why there are fewer women — and frankly, it's even worse for underrepresented groups like African-Americans in the US — is because I think most people have this idea that economics is kind of useless; or they have a misconception that economics only deals with interest rates and growth rates and finance and stuff like that. And, you know, many women are not so interested in that.

The Nobel Prize Committee credited you with introducing "a new approach to obtaining reliable answers about the best ways to fight global poverty." For the uninitiated, can you explain this new approach?

There are two steps to this approach. First, you take a very big, not very well-defined problem. For example, how can we end poverty? And then you try to break it into much more manageable questions, which can have a scientific answer. Like, what is the effect of smaller class sizes in schools? And then the second step of this strategy comes in, which is to set up experiments to try to answer those questions. So experiments are very much the equivalent of clinical trials in medicine, where you're trying a particular intervention against another one or against the status quo, and you randomly assign the groups. For example, in one of our experiments, we studied the effects of smaller class sizes by randomizing students into big and small classrooms, and we then studied the effects.

You have a new book out. It's called Good Economics for Hard Times. In your view, what is "good economics"?

Certainly, it means revisiting them in a big way. For example, on the effects of international trade. If people reacted very well to financial incentives, when they lose their jobs, they will pick up and move to some other place with better job opportunities. But in a world where people do not react so well to financial incentives, then they might not move. And if they don't move, then there is not going to be a natural adjustment to all of the disruption caused by international trade. And that, in our view, explains why the places that were hit by competition with China — what economists call "the China Shock" — got hit so badly. It's because people didn't move. They just stayed there and waited for things to get better.

Economists completely underestimated how hard it is for people to make this kind of transition. There are economic factors, of course, like the difficulty of selling a house or getting someone to take care of your kids. Purely rational things. But some of this has to do more with the vision people have of themselves. If you've been making furniture for 25 years and that job goes away, it's not going to be easy to just become a janitor. The image of yourself is completely shattered. You might rather go on disability or something like that.

You begin the book with the sentence, "We live in an age of growing polarization." And you talk about all our political problems. As a social scientist who works on issues that are often at the center of politics, do you see your role changing in this polarized world?

Well, there is an aspirational role — and the role we actually have. So if we start with the role we actually have, I think it's almost nothing right now, to be fair. For the book, we did a poll, and we asked 10,000 Americans which professionals they trust most within their own field of expertise. And the people they trust the least are politicians. And not that far ahead are economists. Only 25 percent of Americans trust economists about economics. Weather forecasters are much more trusted than economists and, of course, nurses and doctors and things like that. But weather forecasters?! How can we be trusted less on economics than weather forecasters are trusted by the weather?

As you highlight in your book, the general public may not care about what economists think. But I'd like to think that policymakers do. And I do wonder, like, do you think, in your economic research, do you think you've changed policymakers' minds? Have you seen your research make an impact on policy outcomes or thinking?

Yes. I don't have a randomized controlled trial to prove it. There is a recent study in Brazil, actually, by Gautam Rao. They showed studies to mayors, and they find the mayors do pay attention to evidence presented, and they're more persuaded by better evidence. That's true in my own experience with policymakers. I don't have an experiment to prove it, but I have seen a lot of progress in the last 15 years.

This Q&A was edited for clarity and brevity.