Accessibility links
Why Remote Work Sucks, According To Science : Planet Money What social science says about killing the office.

Why Remote Work Sucks, According To Science

Why Remote Work Sucks, According To Science 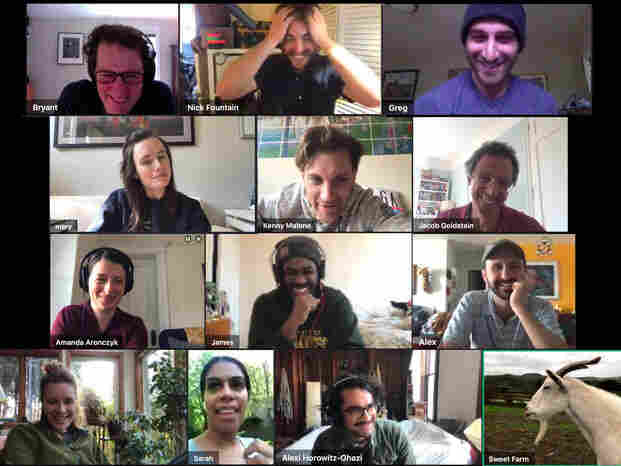 The Planet Money team on GoToMeeting with a goat (Listen to our recent episode, "Making It Work") Planet Money hide caption 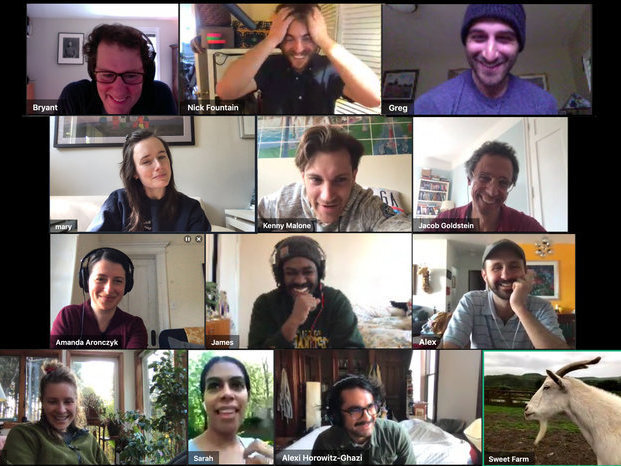 The Planet Money team on GoToMeeting with a goat (Listen to our recent episode, "Making It Work")

Like a decent chunk of the American workforce, Planet Money is now working remotely. Every morning, we have an all-staff video conference on GoToMeeting. We use Slack for conversations. We record in closets and use Dropbox to transfer the files. We're making the best of it — we're happy to have the work — but no one really loves it.

Since the birth of the personal computer, futurists have been predicting the death of the office. If we can chat over video and instantly exchange messages and files, they figured, why would we endure stressful commutes in fossil-fuel-burning vehicles just to sit side by side in brick-and-mortar buildings? I mean, we're mostly staring at screens there anyway.

But the office has proven more stubbornly useful than we had imagined. Between 2005 and 2015, despite the spread of high-speed Internet and apps like Zoom, Slack and Dropbox, the percentage of people regularly working remotely increased only between 2 and 3 percentage points. An estimated 37% of American jobs could plausibly be done full time from home — but, before the pandemic, the total percentage of American workers that worked "at least half the time" from home was only about 4 percent.

Now, with COVID-19, about a third of the workforce is working remotely, and this transition hasn't been easy. At Planet Money, we're facing issues like how to replicate studio-quality sound at home and how to maintain team comradery through cameras on our computers. We're not alone.

According to a recent survey by the Society of Human Resource Management, over 70 percent of employers report struggles with shifting to remote work. Another survey by PricewaterhouseCoopers finds that about half of companies believe they are witnessing a dip in productivity with this shift.

The Stanford psychologist Jeremy Bailenson has spent two decades studying virtual communication between humans, and he's cataloged the ways existing technology fails us. We talked with him, naturally, through Zoom. The technology is kinda awkward. And that's a big part of the problem.

"When we're actually face to face, we don't stare at each other's eyes for that long," Bailneson says. "But the default setting on a lot of these videoconference technologies is a Brady Bunch grid, where everybody's staring at you right in the face." It's exhausting and superweird to have disembodied heads just staring at you for hours.

"People have very dedicated personal norms about the proper space one should leave between themselves and others," he says. But when you're on a video call, your personal space is defined by how close the camera is to your face. In real life, this view of someone would be crazy. If you were regularly this close to a colleague's face in a physical office, you'd probably have serious problems with the HR department. "We very rarely get that close to someone unless we're in a fight or an intimate situation," he says.

It's not all bad. In a series of experiments, Bailenson found that the gaze of a teacher in a video call made students pay closer attention, causing a short-term spike in their productivity. But, he finds, this sort of 1984-style, constant gaze from a superior also causes mental overload. "So I believe that had we run our studies over days, weeks, and months, productivity would have a very steep decline."

Employers like offices so they can keep an eye on the people who do the actual work and motivate them to be productive. It's much easier to do that in person.

The office is a favorite setting of thinkfluencers, as well, who tout its "serendipitous interactions." Think brains colliding with brains in random interactions that generate profitable ideas. Companies like Google and Facebook have bought into this idea, designing big offices with communal spaces to try to get creative juices flowing. Social scientists like Bailenson call this "the watercooler effect," and it's something that is missing in the more structured communication on Zoom calls and even Slack, where everyone is trying not to interrupt everyone else and nothing seems to happen spontaneously.

The office is also a place for social bonding, mentorship and professional development. We're social animals with a gazillion nonverbal microexpressions that we use to communicate, and these can be lost in two-dimensional digital mediums.

Still, it's possible that for many types of jobs, being face to face might not matter for productivity. One study of call centers in China, for example, showed workers were actually more productive when working remotely. Not to mention, working remotely means we don't have to waste time commuting. Bailenson hopes improvements in technology can make working remotely much better. He has spent years studying and developing virtual reality, augmented reality and other technologies with the hopes they can liberate us from mind-numbing commutes.

But don't get too hopeful. Bailenson shared a story about the state of VR technology. When COVID-19 hit in March, the IEEE Virtual Reality Conference, which is sort of the big VR annual event, got canceled, and a virtual one was held. Organizers gave participants the option to participate with VR Goggles, on Zoom, or via Twitch. In a symbol of the state of the technology, Bailenson says, less than a quarter of the VR people decided to use VR to attend the VR conference.

So we have a long way to go on that front. Until then, good luck with your Zoom calls.