Accessibility links
Where Kamala Harris Studied Economics : Planet Money Kamala Harris has called her time at Howard University "one of the most important aspects of my life." Much of that time was spent studying economics. 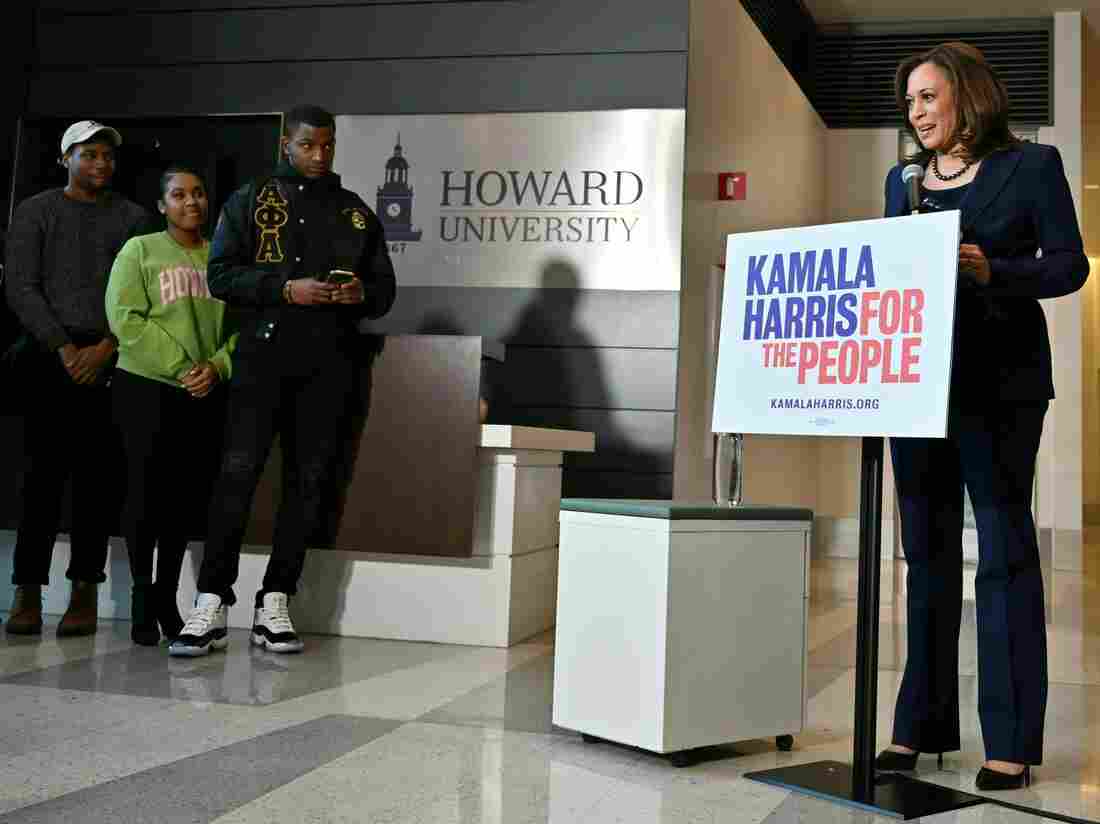 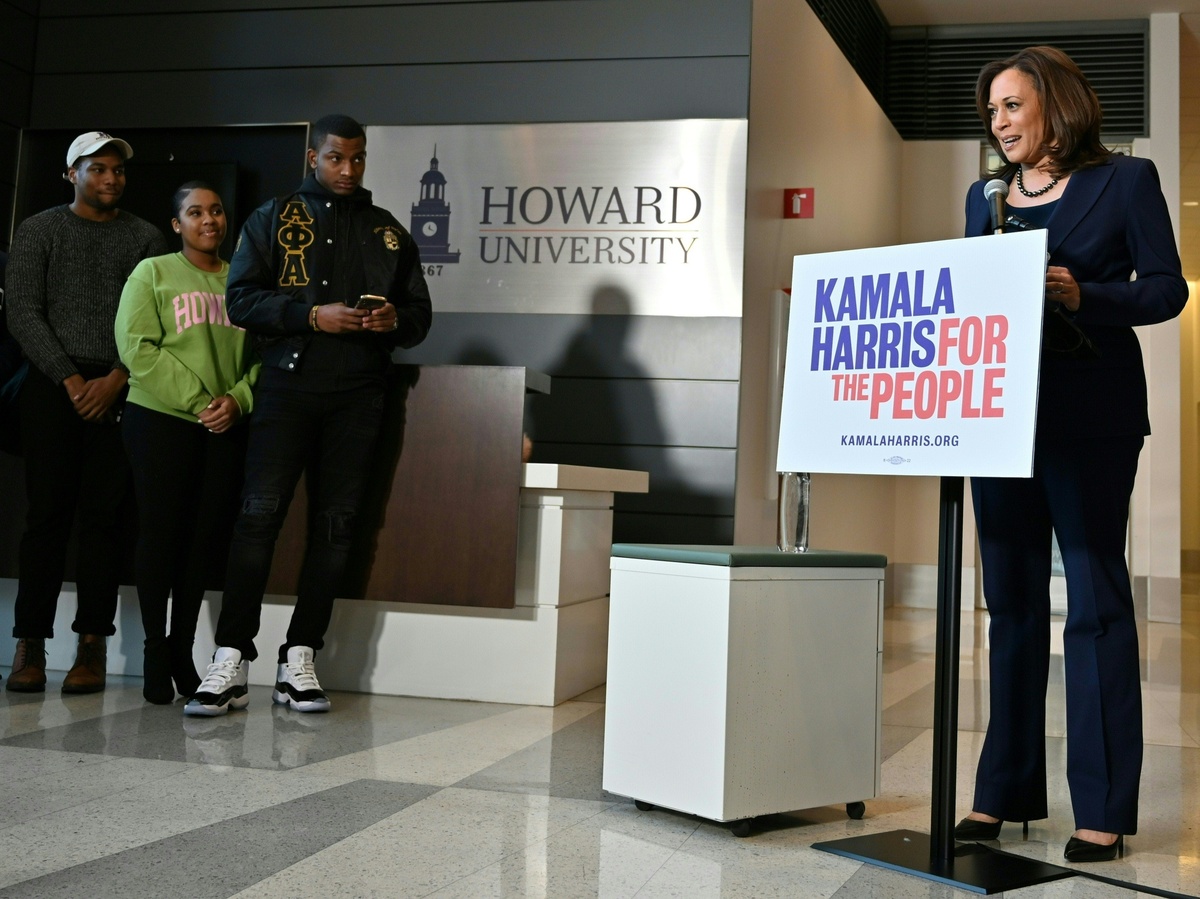 In 2019, a few hours after she announced she was running for president on ABC's Good Morning America, Sen. Kamala Harris held her first campaign event at her alma mater, Howard University, in Washington, D.C. She began by explaining why she was holding the event at the school. "It is because Howard University is one of the most important aspects of my life," Harris said.

Harris was many things at Howard — an elected representative on a student council, an activist against apartheid, a member of the debate team and the Alpha Kappa Alpha sorority. But for us econ nerds at Planet Money, what is especially notable is that she majored in economics. Harris, who double-majored in political science, was apparently passionate enough about economics that she even became president of a student club called the Abram Harris Economics Society.

Jahvon Coney, a junior at Howard who is majoring in economics, is now president of the society. While the cameras focused on Harris at her first campaign event, he says, excitement spread through the university that she was there, right next to the campus Starbucks. "We weren't given any heads-up about it or else the entire school would have been there," Coney says. When he got the news of her candidacy that day, and later her appointment as a vice presidential candidate, it filled him with pride, he says. "It broke a glass ceiling for women, for Black people and for people who have attended historically Black colleges and universities."

Gerald Daniels is the associate director of undergraduate studies for Howard's economics department. He says that since its founding after the Civil War, Howard has had a social mission to solve global problems, especially those facing the African diaspora and other historically oppressed peoples. Howard econ majors get the standard rigorous economics education — microeconomics, macroeconomics, econometrics and data analysis — but, he says, there's an emphasis on getting students to use economic tools to analyze and fix persistent racial inequalities (see our recent newsletter about this). For example, Daniels says, "if we're in macroeconomics, we're going to talk about why is the unemployment rate for Black Americans typically twice that of white Americans?"

With its approach to education, Howard is helping to solve a stubborn problem in the broader field of economics: a lack of diversity. "We are the No. 1 producer of Black students who go on and get their Ph.D.s in economics by far," says Omari H. Swinton, the director of graduate studies and chair of the university's economic department.

The Abram Harris Economics Society that Harris led and Coney now leads gets its name from Abram Lincoln Harris Jr., who was the second African American to get a Ph.D. in economics (the first was Sadie Alexander, and you can listen to our podcast about her here). Abram Harris was a prominent civil rights activist who wrote widely in academic journals, books and magazines like The Nation and The New Republic. He was a pioneer in trying to use the dismal science to help liberate African Americans from economic struggle. During the Great Depression, he headed Howard's economics department and revamped its curriculum. "He felt it was very important that the department be oriented towards labor and towards social justice," says Rodney Green, an economist at Howard who has written a history of the department.

Green has taught at Howard since the 1970s, and while Kamala Harris never took one of his classes, she did work with him when she was president of the economics society, which has input on the department's curriculum and helps attract speakers and employers to visit the university. "I remember she took her role very seriously," he says.

To the best of our knowledge, Kamala Harris bears no relation to Abram Harris, despite the same last name. She is, however, definitely related to Donald J. Harris, the first Black professor to receive tenure in Stanford University's economics department. He's her dad. Originally from Jamaica, Donald Harris is a prominent left-leaning economist, writing extensively on matters of economic development and inequality. He wouldn't speak to us, probably because he has been press shy ever since he went viral after publicly criticizing his daughter. Senator Harris made a joke on The Breakfast Club about being half Jamaican and therefore having definitely tried marijuana. It was a "travesty," he said, for their "proud Jamaican identity being connected, in any way, jokingly or not with the fraudulent stereotype of a pot-smoking joy seeker."

Her time at Howard may have been decades ago, but Kamala Harris' relationship with the university and its economics department continues today. Recently, the Biden-Harris campaign appointed William Spriggs, an economics professor at Howard University and the chief economist to the AFL-CIO, to be co-chair of their economic advisory council.

As for Jahvon Coney, he says he wants to work in business, and despite the insistence of his parents, he has no plans to go to law school after Howard as Kamala Harris did. But, he says, he and other Howard students are eagerly waiting to watch the vice presidential debate on Wednesday. After last week's idea-free train wreck, we at Planet Money are hoping this time we'll hear a coherent exchange about the economic issues facing America. Thanks to Howard, when it comes to discussing economics, Kamala Harris may be uniquely prepared.

A previous version of this article incorrectly said that Kamala Harris was the first person on a presidential ticket since George H.W. Bush to have an economics degree. Donald Trump, Tim Kaine, and Paul Ryan have one as well.