Accessibility links
Trouble On Main Street : Planet Money The Federal Reserve launched a massive program to lend to small and midsize businesses. It has hardly loaned out anything. 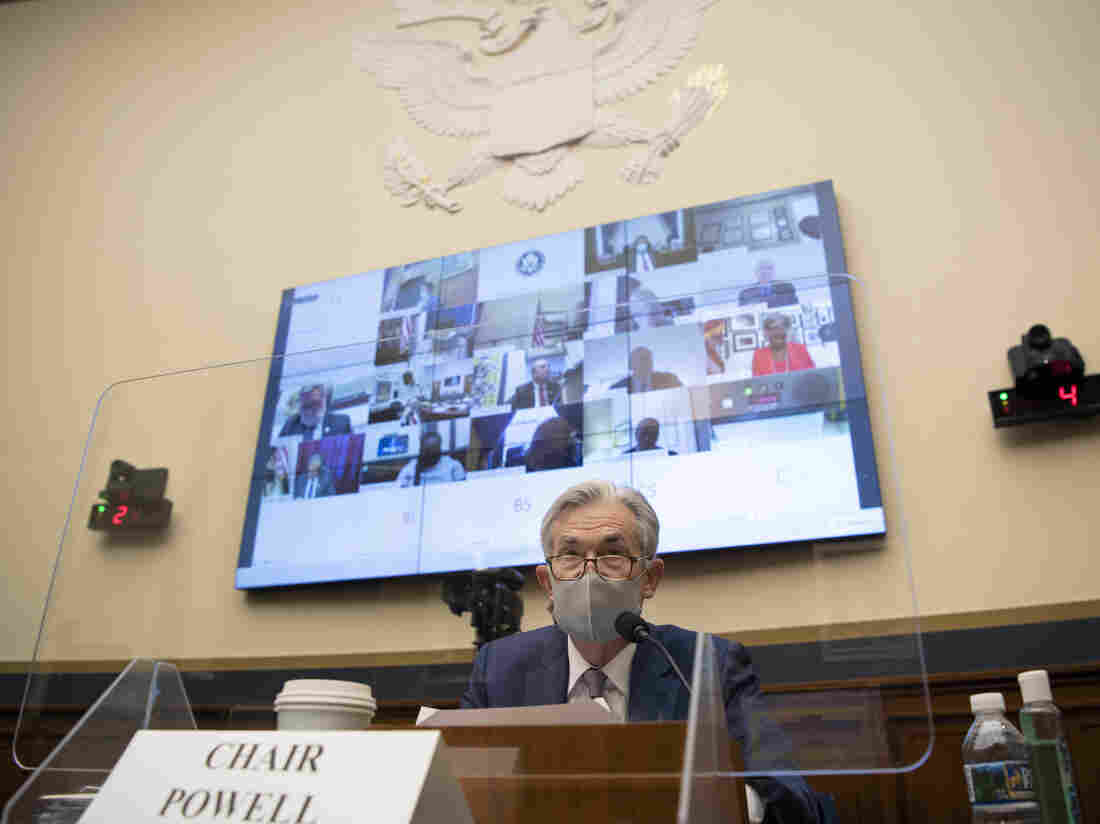 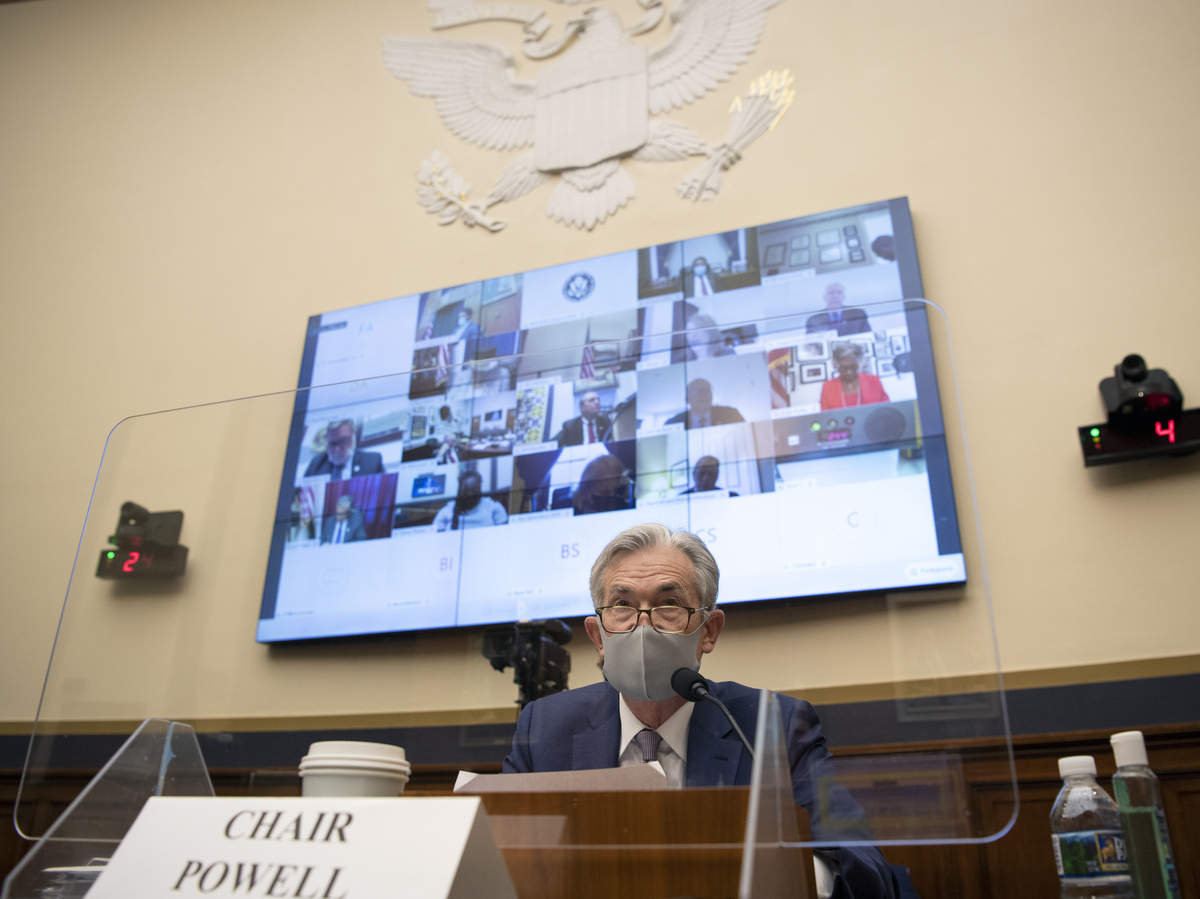 Federal Reserve Chair Jerome Powell testifies before the House Financial Services Committee at the U.S. Capitol last month during a hearing about the Treasury Department's and Federal Reserve's pandemic response.

As the economy went into free-fall this past year, the Federal Reserve went beyond using its old weapons of cutting interest rates and giving emergency loans to banks. With backing from Congress and the Treasury Department, it waded into uncharted waters, providing loans more directly to American businesses. For big corporations, this was an easier job. The Fed basically just had to tweak what it already does, buying and selling debt in open capital markets. But many policymakers were concerned that Main Street businesses, which don't get financing this way, would get left behind.

So the Fed, in partnership with the Treasury Department, created the Main Street Lending Program. It said it would loan out $600 billion to small and midsize businesses under the program, an amount that comes from both the power of the Fed to create new money and $75 billion from the CARES Act passed by Congress to cover any potential losses (the Fed, by law, can't spend money; it loans it).

But something isn't working. As of Oct. 7, the Fed had underwritten only about $2.5 billion worth of Main Street loans. That's less than 1% of the assistance it said it would provide. Meanwhile, the pandemic recession has shuttered thousands and thousands of small and midsize businesses.

What is going on?

Bharat Ramamurti sits on the congressional oversight committee charged with overseeing the Main Street Lending Program. He's an attorney and former policy staffer to Elizabeth Warren (we profiled him in this newsletter a few months ago). Since his appointment to the oversight committee, he's been one of the leading voices advocating for reforming the Main Street program. "So far it has failed," he says.

Ramamurti says this failure really matters for our economy. The Main Street program is especially important for midsize businesses that were too big to qualify for the Payroll Protection Program, which gave loans and grants to companies with fewer than 500 employees. "These midsize businesses employ nearly 50 million people and account for about a third of GDP," Ramamurti says. "They are important regional employers. They are among the most important manufacturing companies in the United States. And it's a real problem that we are failing to provide them with sufficient economic relief."

This Main Street Lending Program has had trouble from the start. It was announced in March, but it didn't get going until June. Before it launched, Fed Chairman Jerome Powell said that of all the Fed's programs to boost the economy, this one was "far and away the biggest challenge" to administer. That's because it involves underwriting loans to individual businesses, which the Fed usually doesn't do. The Fed has been fiddling with the design of the program since it launched, but it still hasn't taken off.

The Main Street program is designed to be at least mildly profitable for banks. The Fed buys the loans from them and eats 95% of the loss if a business goes belly up and can't repay its loan. But even though the private banks making the loans stand to lose just 5% if a loan defaults, it's possible that many companies are so weak that banks won't even take that chance. A recent Fed survey found that more than half of participating banks said they had rejected Main Street loan requests from companies that were "creditworthy before the COVID-19 crisis, but too severely impacted to remain viable and hence unable to repay the loan."

There may be trouble in Washington, too. With passage of the CARES Act, Congress gave money to the Treasury to fund programs like Main Street. The Treasury Department is in charge of this pot of taxpayer money, which is earmarked for Fed use if loans go bad. But reports say the Trump Treasury Department has been telling the Fed and private banks to be super cautious in using the program so as not to lose taxpayer money.

Ramamurti proposes that we scrap the Main Street program altogether and just give some of the earmarked money to businesses. Not a loan, but a grant. And that means taking the Fed out of the picture. The way Ramamurti sees it is kind of like that Alanis Morissette lyric. You know, "it's like 10,000 spoons when all you need is a knife." The Fed has like 10,000 ways to help lend money to businesses, but it doesn't have the congressional authorization to just give money to businesses. Businesses have to pay Fed loans back with interest, and that might not be what they need. It might not be ironic, but it is frustrating. Like rain on your wedding day.

Fed Chairman Powell seems to believe so. Late last month, Powell told Congress that "Main Street loans may not be the right solution for some businesses." And he said that they should set up a different program and hand responsibility to another agency because "trying to underwrite the credit of hundreds of thousands of small businesses" might just be too difficult for the Fed.

Just giving away money would require congressional action. Powell himself has been calling for another round of stimulus, but it's proving to be difficult as the election approaches. If the only option becomes reforming the Main Street Lending Program, Ramamurti says, the Fed and the Treasury should make loans more generous, with lower interest rates, more time to pay, relaxed loan qualifications, and so on. "I think those changes would help," he says.

But that could be like, as Alanis said, the good advice you just didn't take.