Accessibility links
Biden Vs. Biden On China : Planet Money In the early 2000s, Joe Biden helped bring China and America closer. Now, not so much. 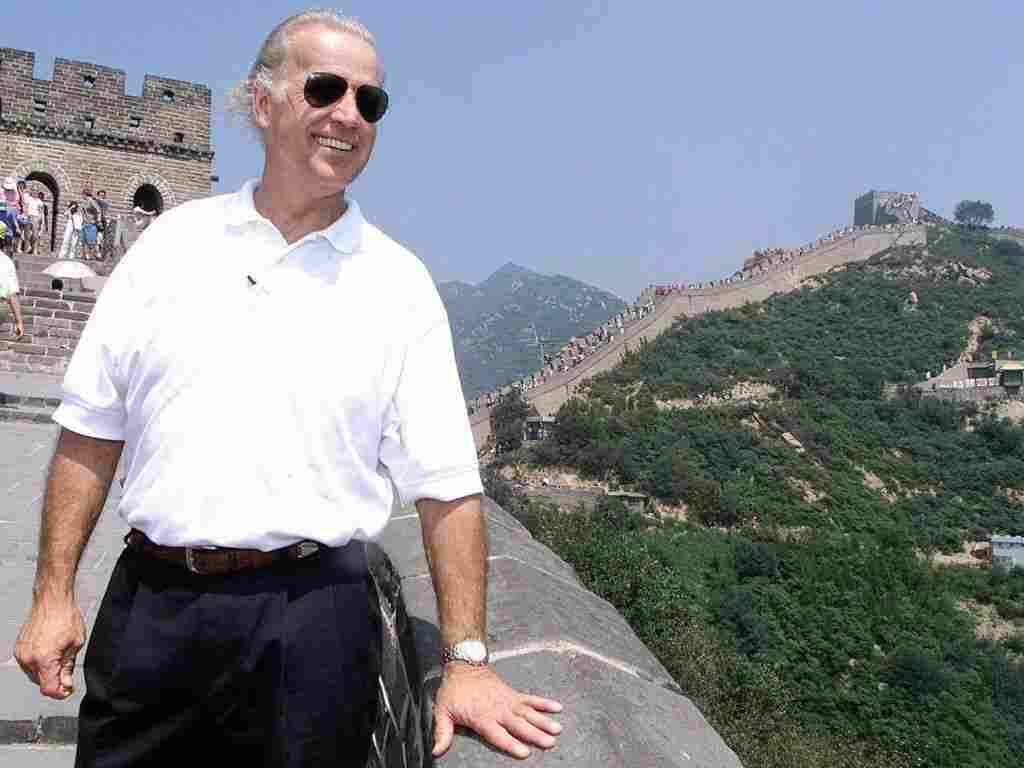 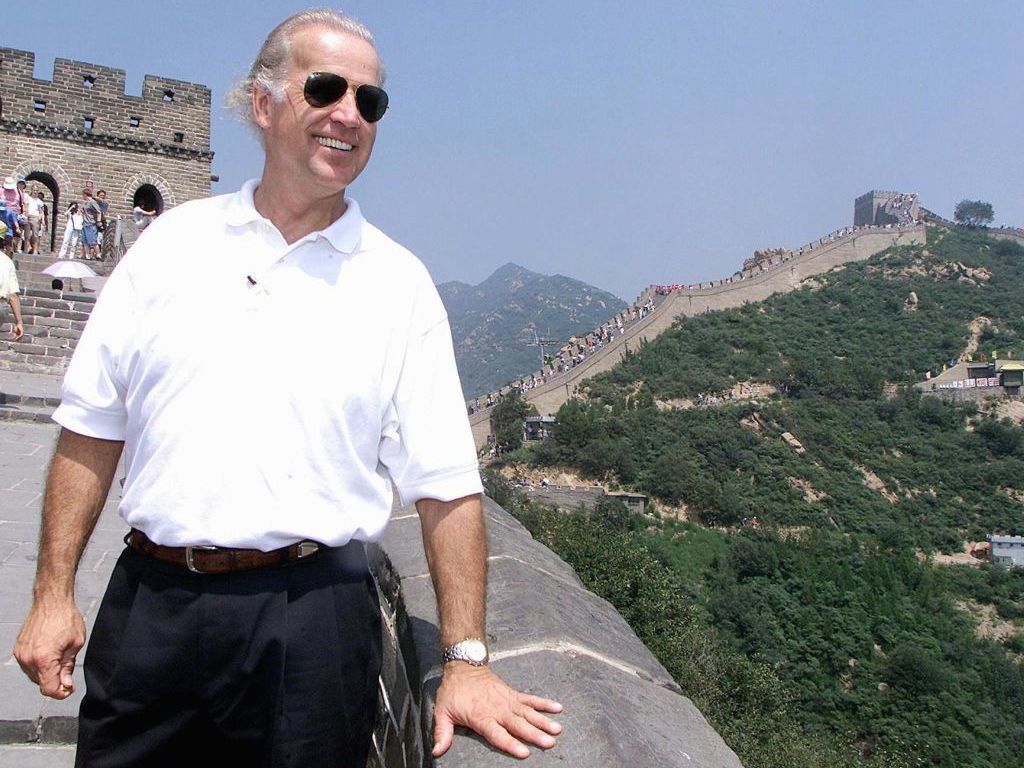 Then-Sen. Joe Biden, in August 2001, on his first trip to China as chairman of the Senate Foreign Relations Committee.

In 2000, then-Sen. Joe Biden joined with 82 other senators and the Clinton administration in normalizing trade relations with China. It was a crucial step in allowing China to join the World Trade Organization. Labor unions like the Teamsters and the United Auto Workers hated this and mounted a feverish campaign against it. They feared that lowering trade barriers with China would flood the U.S. with cheap Chinese products and kill jobs. But Biden and others argued that it would promote economic growth and peace and help convince China to play by international rules.

Shortly afterward, Biden became chairman of the Senate Foreign Relations Committee and flew to China for one of his first big diplomacy trips. Standing in front of a group of reporters in Shanghai, Biden declared, "China is not our enemy. There's nothing inevitable about China and the United States not being as cooperative as other nations."

Two decades later, Biden, now president-elect, sounds less like he wants to be friends with China and more like he's ready for a new Cold War. During his campaign, Biden called China's leader, Xi Jinping, a "thug." He threatened economic sanctions. He wrote in a piece in Foreign Affairs that the U.S. needs "to get tough with China." The bipartisan consensus to bind China and America together created one of the most remarkable economic engines the world has ever seen, but there seems to be a growing consensus to dismantle that engine — or, at least, take it to the mechanic for a serious rebuild.

If Biden talked about China in 2020 like he did back in 2000, he might have lost the election. Three-quarters of Americans now have an unfavorable view of the country — up from about a third in the early 2000s. China, which has an economy 12 times larger than it was in 2000, is now a boogeyman. Trade with China may have slashed costs for American consumers and created countless new jobs in various sectors, but — as organized labor warned back in 2000 — it also destroyed huge numbers of blue-collar jobs. Economists David Autor, David Dorn and Gordon Hanson estimate that China's joining the WTO killed about 2.4 million American jobs, including about a million in manufacturing.

And far from becoming a friendlier, more democratic, rule-following nation — which Biden and other American leaders hoped would happen after China was let into the WTO — China has gotten even more despotic. Add in a pandemic that began in its heartland and spread on its watch, and it's easy to see why China's popularity is plummeting, not just in the U.S., but in nations around the world.

The question now is what Biden will do about it. His predecessor levied hundreds of billions of dollars in tariffs on Chinese products and tried to hinder China's technological advances by, for example, forcing tech firms like TikTok to sever ties with a Chinese owner or else close up shop in the U.S. (imperiling Planet Money's pretty awesome TikTok account). But despite the Trump administration's actions, China's rise continues. And they may have even created a U.S. leadership vacuum in Asia that helped China.

Last week, China signed the Regional Comprehensive Economic Partnership. Eight years in the making, RCEP is maybe the world's largest free trade deal in history. It includes China, Japan, South Korea, 10 Southeast Asian countries, New Zealand and Australia — which together account for almost a third of the world's population and economy. While there's a debate about how economically important the deal is, most analysts agree RCEP is a huge geopolitical win for China — solidifying it as the foundation of a regional industrial complex that continues to be one of the world's most powerful economic forces.

The genesis of this deal can be traced back to actions that Biden and the Obama administration took back in the early 2010s. They spearheaded the Trans-Pacific Partnership, which was explicitly designed to exclude China and promote American hegemony in Asia. RCEP emerged as a China-friendly alternative. Biden, as vice president, was a major proponent of TPP. "Our goal is to help tie Asia-Pacific nations together — from India to the Americas — through strong alliances, institutions and partnerships," he said in a 2013 speech.

Even back then, Biden and Barack Obama's geopolitical strategy was in tension with a growing trade skepticism in both major political parties. Many saw TPP as another free trade deal that would help multinational corporations at the expense of blue-collar workers, making it unpopular. Even former Secretary of State Hillary Clinton opposed the deal as she ran for president in 2016. President Trump pulled the U.S. out of TPP as soon as he assumed office. The other national signatories of TPP continued on anyway and signed it into law. Now some foreign policy folks are arguing that rejoining the trade pact is the easiest way for Biden to counter RCEP and reassert the U.S. in the region. Since he spent years fighting for that strategy, Biden probably still likes that idea. But TPP remains unpopular, especially among labor unions, progressives and Trump supporters.

Asked about RCEP last week, Biden said that America needs to ally with other democracies "so that we can set the rules of the road." Otherwise, he said, "China and others dictate outcomes because they are the only game in town." He seemed to keep the door open to a TPP-style trade agreement, but he stressed that America would first have to invest in making its workers competitive and bringing labor unions and environmentalists to the table. It was a bit of double-speak, offering bones to both pro- and anti-trade constituencies. He was light on specifics.

With RCEP and about $360 billion worth of Trump's annual tariffs still remaining on Chinese goods, Biden will soon have some big decisions to make. "I promise you I have a pretty thorough plan, and I will be prepared to announce that to you on Jan. 21," Biden said.