Accessibility links
The Todd Barry Interview : Monitor Mix Todd Barry is a comedian who lives in Manhattan. His stand up has been featured on the Late Show with David Letterman and Late Night with Conan O'Brien. He has appeared on numerous live action and animated programs, from Flight

Todd Barry is a comedian who lives in Manhattan. His stand up has been featured on the Late Show with David Letterman and Late Night with Conan O'Brien. He has appeared on numerous live action and animated programs, from Flight of the Conchords to Aqua Teen Hunger Force. Todd was kind enough to answer these questions over email, a medium that allowed me little defense against his piercing, blinding, slaying, violating wit. If you have never seen Todd perform live, it is highly recommended. And if you have seen him, see him more; he is a funny man. Tour dates, pictures, and more information can be found on his website.

TB: I actually haven't filmed the movie yet, Carrie (ooh, we're off to an awkward start). But yes, I have some scenes with him in an upcoming film titled The Wrestler, directed by Darren Aronofsky. I'm a fan both of those guys, so I'm really excited. I film in early March, so you'll have to wait those Mickey Rourke "tidbits." Maybe I'll even get you some "morsels."

CB: Do you think you could live outside of New York? Maybe in Florida again? In what other cities would you feel accepted or fit in?

TB: Where would I "feel accepted or fit in?" Am I a child molester who was just released from prison? I don't have a huge desire to move back to Florida, although it's freezing in New York now, and I heard there's a glut of affordable condos in Miami, so it's not totally unappealing. I really love living in New York, but -- for a city that has everything -- it is also limiting in its own way. Maybe if I become rich I'll get a little house somewhere else. Do you want me to move to Portland?

CB: What is the connection between comedians and musicians? Labels that were associated solely with music have started putting out comedy albums and comics tour with bands quite frequently. Is it merely an attempt to broaden your audience, are the groupies better, or is it that the economic woes of the country require package tours? That being said, do you prefer to tour with other comics?

TB: There's a long history of musicians and comedians sharing a bill, and music labels put out the comedy albums I listened to when I was a kid. It is, however, a relatively new phenomenon in the indie-rock world. I've done great shows with bands, including Yo La Tengo, The Shins, Aimee Mann and Michael Penn, They Might Be Giants, and a tour of Sweden with Jens Lekman. When it works, it's loads of fun and different than the typical comedy club experience, but it's something that I'm careful about. I was once asked to open for the Beach Boys at an amusement park in New Jersey on July 4th. The "warrior" part of me would've liked to said yes, but the (larger) part of me that didn't want to get eaten alive said no. A friend of mine ended up doing it and got booed off the stage. I also turned town an opportunity to open for "Weird" Al Yankovic because the money was bad. I regret not doing that one, just for the story. If I'm opening for a band I try to get someone from that band to introduce me, to sort of send the message to the audience that "he's with us," and possibly thwart any disruptive behavior. Not to sound too precious, but a comedic performance is a delicate thing; I go to rock shows fairly often, and I actually think audiences talk too much during the bands, who at least have the advantage of volume.

CB: I saw you open for Louis CK, and while his style is very scripted, yours involves a lot of rapport with the audience and leans towards site specific observations. When it works, your approach adds to the uniqueness of the performance, but what happens when it doesn't work? Can you provide an example of when you referenced a town, city, or aspect therein that failed with the audience?

TB: I remember doing a show in South Bend, Indiana. It was in a shitty, mostly-vacant mall. I noticed that that department store next to the club was going out of business and having a "fixtures sale." I went on stage and said something like "I'm just in town for the Save-o_Mart fixtures sale." HUGE laugh. Oh wait, you were asking for a time when it DIDN'T work. I can't think a specific example, but I'm sure I've gone on stage with the attitude of "you guys hate living here, right?" And it turns out they like living there, so you just look like and elitist tool. But that hasn't happened a lot.

CB: Do you ever wear shirts that aren't button up shirts?

TB: Holy shit, where did that one come from? You're really going for the jugular! You and I have only hung out a handful of times (and maybe broken bread once or twice) but I didn't think I've been around you enough for you to notice the trend in my shirt preferences. And the last time you saw me was at a wedding. Is it cool that I wore a button-up shirt to a wedding? If I wore a Smashmouth Rules t-shirt like you did, I would've been thrown out. (Carrie wore a "Smashmouth Rules t-shirt to a wedding) But you're actually not the first person to ask me that question. And you're right I usually wear button-up shirts. And I never wear shorts. I know you didn't ask me about shorts, but I added that as a bonus.

CB: What aspects of your humor are culled from growing up in Florida? Is there a Floridian style, sensibility or character that has informed your writing or performance?

TB: I wouldn't say I do "Florida-style" comedy, but I love the concept ("Todd Barry's okay, if you like your comedy Florida-style.") But I did start my comedy career down there, so in that sense it's been influential.

CB: I have always been grateful that even during the political correctness phase that gripped the nineties (a well intentioned movement that stifled a lot of expression and took itself very seriously) comedy continued to ignore or break a lot of those restrictions. Yet, is there a subject that is off limits in your comedy or is everything fair game? Have you ever been criticized for going to far?

TB: I think everything is fair game, but not necessarily for me. There are definitely topics I wouldn't joke about, but would probably laugh at.

CB: What is the weirdest fan letter/email you have ever received?

TB: Have a look at this.

CB: Do you practice your live act in front of people, into a recording device, in front of the mirror, or all three? Or are untested jokes tried out in smaller markets?

TB: The only time I would really "practice" a comedy set (without an audience) is if I was preparing for a stand-up spot on TV, or if I was doing a more theatrical one-man-show type thing. I generally do my joke writing and re-writing on stage. Many good lines come out in the moment, and that's probably not something that would happen if I was sitting at a cafe, writing jokes on a laptop. And as much as I like the idea of doing a month of shows in Casper, Wyoming to try out new jokes, I feel like big city residents deserve to be punished with underdeveloped material as much as anyone. There are, however, some smaller rooms in New York where I am more likely to a set that's largely comprised of untested material.

CB: If an audience doesn't laugh at a joke is it because they don't get it or because the joke isn't funny?

TB: It could be that the joke isn't funny (did I just say that?) or that I haven't figured out a way to communicate why I think the essence of the joke is funny. There are also times when the audience is just bad. And there are other times when they seem bad, but they're just low-key, and are actually having a good time. And, of course, there are times when I'm bad. I also have a handful of jokes that seem to be fully fleshed out, but only get laughs ten percent of the time. That's always confusing to me. But maybe they aren't funny.

CB: When you meet fans, what is the most typical thing that they say to you?

TB: If they meet me after my show they usually say something like "that was great," "wow, you were awesome", "holy shit, that was amazing", "fuck, that was life-changing" or other variations of that sentiment. But if they meet me on the street or at a bar, they usually say something like, "hey, you're a comedian, right?" And lately I've been getting recognized a lot from my appearance on Flight of the Conchords.

CB: Everyone knows that you have beautiful eyes and trenchant wit, but what is a skill or attribute that we may not be aware of?

TB: I guess I could name another attribute other than my beautiful eyes or my wit, but why focus on that? That's like asking Tiger Woods, "hey, I know you're good at golf, but do you also make a mean omelet?" But I guess it's possible not everyone knows about my beautiful eyes. Maybe you should post a photo of them right here: 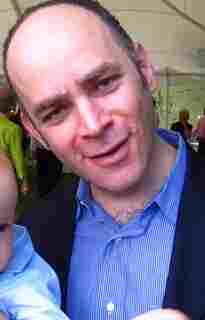 CB: Can you give a one sentence review of your current favorite TV show?

TB: Intervention
If you like watching a chiropractor go out to his car and do speedballs between patients, this is the show for you.

CB: What is the first joke you ever told?

TB: My comedy debut was at Coconut's Comedy Club in North Miami Beach, FL, in 1987. I did five minutes of jokes about McDonald's and circumcision. Not sure which joke I told first or how I tied those two subjects together.

CB: What is anathema to comedy?