Accessibility links
Eight Years Gone : Monitor Mix Here is the music that arose during the last eight years -- the bands and songs that wrestled with the fear, uncertainty, disenchantment and frustration that for many people defined the Bush era and the events that unfolded during his tenure. 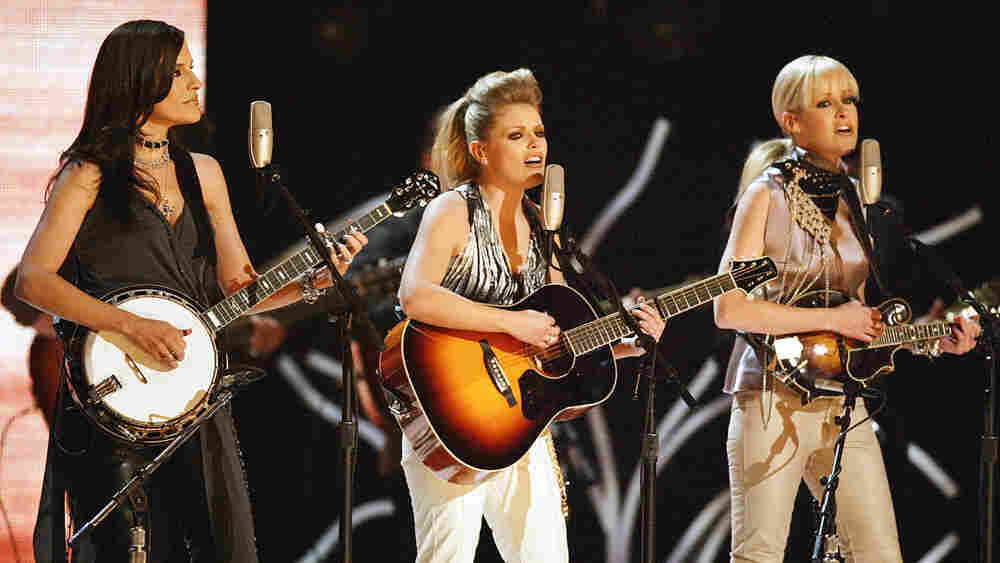 Natalie Maines of the Dixie Chicks got herself and the band in a tizzy when she said, "Just so you know, we're ashamed the president of the United States is from Texas," in 2003. Frank Micelotta/Getty Images Entertainment hide caption

In a matter of hours, we'll put the presidency of George W. Bush behind us. (His legacy, of course, is another matter entirely.) While much of the nation is looking ahead, singing along to Woody Guthrie's "This Land Is Your Land" at the Barack Obama inauguration concert without an ounce of irony, I'd like to take this moment to reflect upon what we're leaving behind. Specifically, I'm thinking of the music that arose during the last eight years -- the bands and songs that wrestled with the fear, uncertainty, disenchantment and frustration that for many people defined the Bush era and the events that unfolded during his tenure.

1. My co-worker Robin Hilton reminded me of Granddaddy's "He's Simple, He's Dumb, He's the Pilot" (released in 2000) as a good place to start, so I will. However, like Bush's presidency itself, there's very little in the months leading up to Sept. 11, 2001, that I remember in terms of music. But it's interesting to note that Granddaddy's song existed well before the rest of the world caught up with its sentiment.

2. Bush's approval rating did not begin anywhere near the paltry 22 percent it's at now. After Sept. 11, the public's approval of the president soared, and in the fragile months that followed, criticism of the administration seemed tantamount to treason, with protest a betrayal and ideologies straying from the status quo widely deemed anti-American.

Musically speaking, 2001-03 was right before most bands would really embrace home recordings as anything other than demos. This was before they were so frequently willing to bypass the press juggernauts and just release an MP3 on a blog; consequently, sonic responses to Sept. 11 and the subsequent wars with Afghanistan and Iraq were slim and slow to arrive. The first tunes we did hear were anthems like Alan Jackson's "Where Were You (When The World Stopped Turning)" and Neil Young's "Let's Roll" -- songs that seemed the only appropriate, or available, musical responses to the terrorist attacks. Lugubrious? Jingoistic? Cheesy? Sure, but also summarizing and uniting, at least for some.

As a side note, I randomly bought the System of a Down album Toxicity in 2001. It must have been because the music was angry. I remember hearing the title track on the radio and feeling relieved that the sound of agitation -- which is how some of us were beginning to feel -- was on the airwaves. I don't think I was the only one to embrace the band during that time. (On a later album, System of a Down's "Soldier Side" contained more trenchant Bush criticisms.)

3. At first, they crept in from the fringes, but the songs of protest and questioning did arrive. Steve Earle's "John Walker's Blues," about John Walker Lindh, was one of the first, and it drew sharp criticism. My own band, writing and recording our fifth record during the winter of 2001, put more than a few songs about Bush and the war on what was to become One Beat -- specifically "Combat Rock" and "Faraway." It's interesting to note that, upon the album's release in early 2002, interviewers focused on the so-called risk we were taking by including those songs. Yet by the end of that year, I was featured on NPR's Talk of the Nation as one of four artists across various disciplines who had criticized the Bush administration. The tide was turning. In 2002 and 2003, compilation CDs such as Rock Against Bush and Peace Not War -- which included everyone from Foo Fighters to Yo La Tengo to Public Enemy -- were fairly common in record stores.

4. Though Bruce Springsteen played "The Rising" at Obama's inauguration concert, in 2002 I saw him on tour for the album of the same name. The record felt like a survey of that year -- embodying not only protest but also pride, as only Springsteen can manage. He told the small stories, and by telling them, he was able to capture the contradictions and complexities of not just his characters' feelings, but ours as well. Whereas the government had been attempting to simplify and reduce the world into good vs. evil and us vs. them, The Rising came as a relief. But it also marked the return of Springsteen and his influence on contemporary music -- not just in style, but also in substance. Without The Rising , we might never have gotten Arcade Fire's own protest song, "Intervention."

5. The Dixie Chicks' "Not Ready to Make Nice" spoke of the stifling narrowness gripping both semantics and ideology during the Bush administration. Though the band was singing about its own vilification following a critique of the president, many related to its sense of disbelief and anger.

6. In 2004, Green Day's American Idiot gave a mainstream, platinum-selling voice to the protest movement of the time. With the title track and songs like "Holiday" and "Wake Me Up When September Ends," Green Day produced anthem after anthem, making rebellion not only patriotic, but also poppy, the way kids like it.

7. Bright Eyes' performance of "When the President Talks to God" on The Tonight Show With Jay Leno marked one of the gutsiest moments I'd seen on network television in a long time. In my mind, in terms of ballsiness, it was second only to Kanye West's famous remark -- "George Bush doesn't care about black people" -- during a live Hurricane Katrina telethon. (West's song "Crack Music" was his musical version.) Both moments felt raw and unrehearsed, in contrast with the polished precision of the Bush administration.

8. Many other songs during the last eight years used their own sonic lexicon to either subtly or pointedly reference a sense of dissatisfaction, powerlessness and rising vitriol. Wilco's "Ashes of American Flags," from Yankee Hotel Foxtrot, is particularly powerful, though the band's entire body of work evokes much of the last eight years for me. Perhaps it's the sadness in the songs, which tell tales of division, crumbling and something always just shy of reconciliation.

Certainly, music in the time of George W. Bush was not limited to protest songs. Many artists acted as more of a soothing salve, or rejected a musical relationship with current events altogether. There was the '80s revival of Interpol, Franz Ferdinand and The Bravery; there were the catchy phenomena of Justin Timberlake, The Postal Service and Clap Your Hands Say Yeah; there was OutKast's massive hit "Hey Ya." (Though OutKast did not shy away from politics; see "B.O.B." from Stankonia.)

In the last few years, the songs and struggles have tended toward the internal: A lot of music has become as personalized and intimate as the means of recording it. There's a widespread sense of weariness and reflection in place of fury, alongside a hard-earned desire to dance, celebrate and escape. But, like the end of the Bush era itself, those recent musical trends are the denouement. The lasting musical embodiment of the Bush administration will be the songs with teeth -- the ones that weren't afraid to snarl back at bared fangs.

Please add your own list of songs that encapsulate the last eight years for you.

After which, we can look towards the future.