Accessibility links
Signs Of Music Fandom: Shrinking Or Growing? : Monitor Mix More results from the survey we sent out to a variety of folks in the music, arts and entertainment communities! 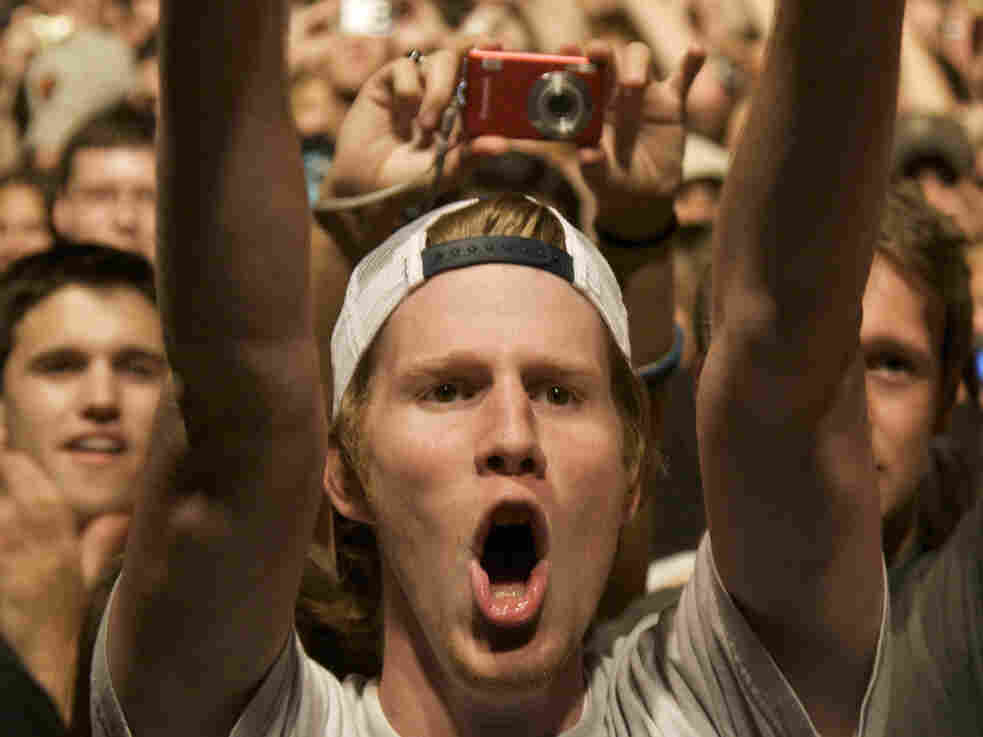 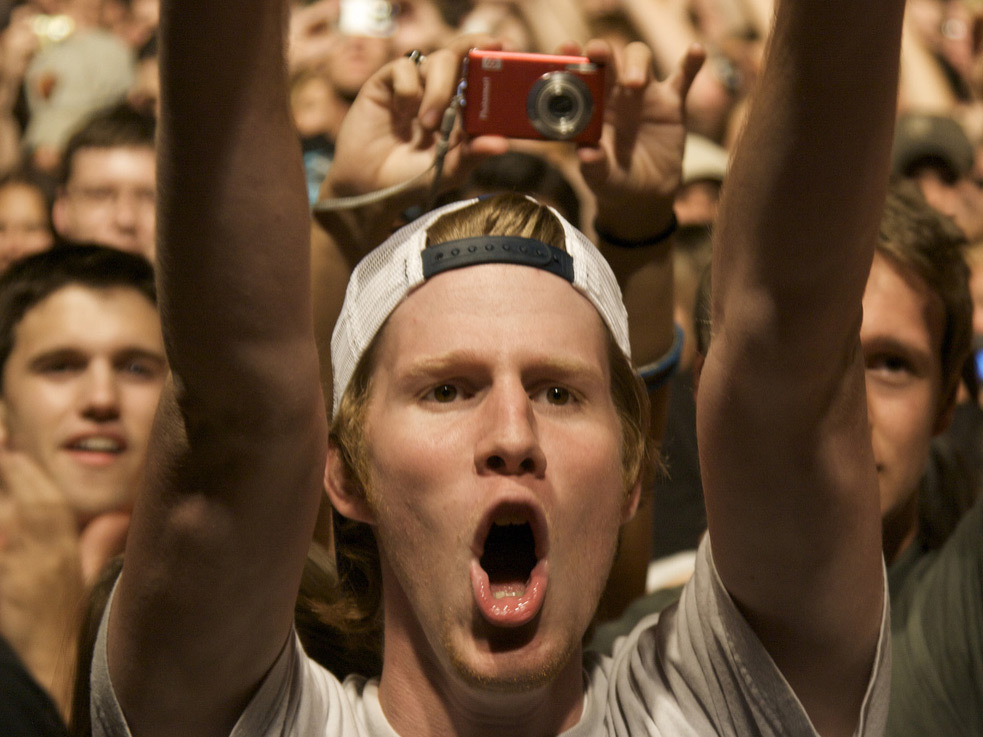 More results from the survey we sent out to a variety of folks in the music, arts and entertainment communities!

Here was the question:

How much physical evidence of your music fandom have you shed in the past decade? How much have you collected?

Lance Bangs, filmmaker, director:
I haven't shed much, have continued to find chambers to explore in record sleeves, books and magazines.

David Scheid, tour manager:
I've always collected T-shirts, and I still actively do this. I think in the last decade, since I've had an actual income, it's quadrupled in size. I also collect laminates and tour memorabilia from my jobs, and also set lists from bands I like. From the last decade, I have a set of guitar strings I took off of Ron Asheton's Strat. I think that's my favorite.

Kathy Foster, musician, The Thermals: I don't collect or display posters so much anymore. I don't buy band shirts so much, but then, I usually get a lot for free from my friends' bands. But I still buy vinyl and CDs — not quite so much as I used to, but a fair amount.

Isaac Bess, Business Development, IODA Alliance:
I moved cities enough that I had to put a practical end to collecting, but not to hoarding. But I've got a lot of stuff in storage that I have no intention of ever shedding, boxes of records next to boxes of comic books and Black Stallion novels and sixth-grade report cards. Why would I get rid of that stuff? I don't get people who rushed to sell all their CDs at Amoeba. What did they use that extra shelf space for? I bet it was something lame.

James Canty, musician, French Toast, Make Up, Nation of Ulysses:
I left all my LPs in D.C. when I moved, and did not start reclaiming them for many years. Now I am falling in love with all that great s--- all over again. I suppose for those few years, it would have been hard to tell by walking into my apartment how big of a music fan I was. But I also have always remained touring in bands of varying success, so hopefully that speaks to a devotion and love of "the craft."

Alyson West, band manager:
All of my old records are still in my possession. I am waaaaay less interested in buying things for the sake of "having" them, and I think when I was "collecting records," that mostly stemmed from working in record stores in the '80s and '90s. But I also haven't sold or gotten rid of much. Even through all the moves, it's all still with me, albeit to some degree still in boxes. It's still cool to look through all those old 7" singles sometimes! I'm not the type to put everything on a hard drive and get rid of it. That would feel weird. But at the same time, CD shelves are awkward and take up too much space. I'm still trying to find the best solution to that.

Rob Walker, co-founder of significantobjects.com; author of Buying In:
One minor note here is that I recently realized I no longer own a single band-related T-shirt. I never made any decision about this, so I can't say why, but I found it kind of shocking — I used to wear almost no other kind of T-shirt! Somewhere along the way, I guess, the whole idea of this particular physical evidence of fandom seemed to mean less, maybe? It used to be you had to be at the show to get a T-shirt, but then you could just get them online or at Urban Outfitters, and it lost its value to me, I think. Like I said, it was never a conscious decision. (And I still wear lots of T-shirts, so that's not the explanation.)

Sara Jaffe, musician, writer, teacher:
I'm less likely to put up posters or wear T-shirts, and I buy fewer music magazines (not that I ever bought that many), but I continue to buy records and CDs, albeit at a slower rate. I make fewer mixtapes, too, sadly.

Rachel Blumberg, musician:
In the '80s, I collected vinyl records and I had hundreds of records. Then the era of the CD emerged. I fought it off for a while, because I was betrothed to my beloved vinyl. However, over time, convenience and accessibility won out: During the early to mid-'90s, and into the early part of the '00s, I amassed a large collection of CDs. When I finally bought a house, the CDs were displayed front and center in my home, but about three or four years ago, a shift occurred. It started with several small labels releasing reissues of beloved records on heavy luxurious vinyl; I bought some of these. It was so nice to look at a record sleeve again and to feel that nice thick vinyl, and I loved the way it sounded, too. I started going frequently to stores with large selections of vinyl and buying used records with abandon to replace all the ones I'd lost over the years. Then I stopped buying CDs all together, and now only buy vinyl again. Also, I like having to go over to the turntable to turn over the record. It makes me pay more attention. And it seems to me that more and more people are buying vinyl, at least in the small music world I live in. I realize that this may not be the case for the greater majority of people, but more and more people I know who make music or who are real music fans have moved in that direction. I think that people really value the visceral experience of having a record as opposed to a CD. And, of course, it is nostalgic for some folks, too.

Alex Cohen, host, All Things Considered on KPCC; contributor, NPR's Song of the Day:
I was never a HUGE collector, but I do have a lot of T-shirts, and those are always the hardest to part with. I don't think I've shed too much, but I've definitely stopped collecting as much. T-shirts are dang expensive now, and I realize that I probably won't wear them all that much.

Andrew Leland, Managing Editor, Believer Magazine:
I got rid of lots and lots of jewel cases, lots of CDs, a fair number of posters. A bunch of cassettes. Vinyl came after all that for me. Still have plenty of CDs and cassettes, though. Not too many jewel cases or liner booklets.

Carly Starr, Sub Pop Records:
I have more vinyl than I used to and probably the same amount of CDs. I really like having a physical copy of my favorite music. Something to hold, touch and look at.

Lucy Robinson, publicist, Jajaguwar/Secretly Canadian/Dead Oceans:
The most important things, like snapshots of myself at 15 with Ben Folds Five while wearing a retainer, are somewhere deep in my mom's garage until enough time has passed for me to find them less cringe-worthy. Gone are the glossy posters of yore in favor of artist-screened gig posters. I sold the vinyl I didn't listen to slowly but surely during periods of ultra-poverty. My cassettes became the property of Goodwill. I retain a small but manageable collection on a couple of hard drives and three crates of my favorite LPs.

Tristin Aaron, Media Director, Women's Media Center:
I collected and shed an enormous amount, as did my partner. We live in a 700-square-foot apartment in Brooklyn and are making room for our son to be born, so that Ice Cube Rubik's Cube and Bubba Sparxxx hot sauce had to go. But I think I hung on to the Rites of Spring jacket, somewhere. I mean honestly, having crafted one's entire persona for years on the idea of one's awesome taste and terrific sense of humor does get old and oppressive, in its own way.

Jimi Biron, Executive Director of Booking, Crystal Ballroom:
I suppose I have burned all of my CDs, so instead of a closet filled with CDs, I just have an iPod. But the vinyl collection isn't going anywhere. I probably have more band T-shirts than ever: The kids wear the Sleater-Kinney kitty and a somewhat inappropriate Take That T-shirt, but no one knows Robbie Williams here, so it is pretty funny. My 'hp' icon is covered with a BTS sticker, I still have the "Led Zep" bathroom in the house — with floor-to-ceiling Zep posters, etc. — and I have a recently framed Mike King Flaming Lips print (not a concert poster, though), so I think I have actually collected far more than I have shed.