Accessibility links
The Decade In Music Timeline: What Did We Miss? : Monitor Mix By Michael Katzif It's never easy to map out an entire decade in music. So, in constructing the "Decade in Music" interactive timeline, we sought to shape it with some of the bigger tent-pole trends, news (Elton Joh...

The Decade In Music Timeline: What Did We Miss?

The Decade In Music Timeline: What Did We Miss? 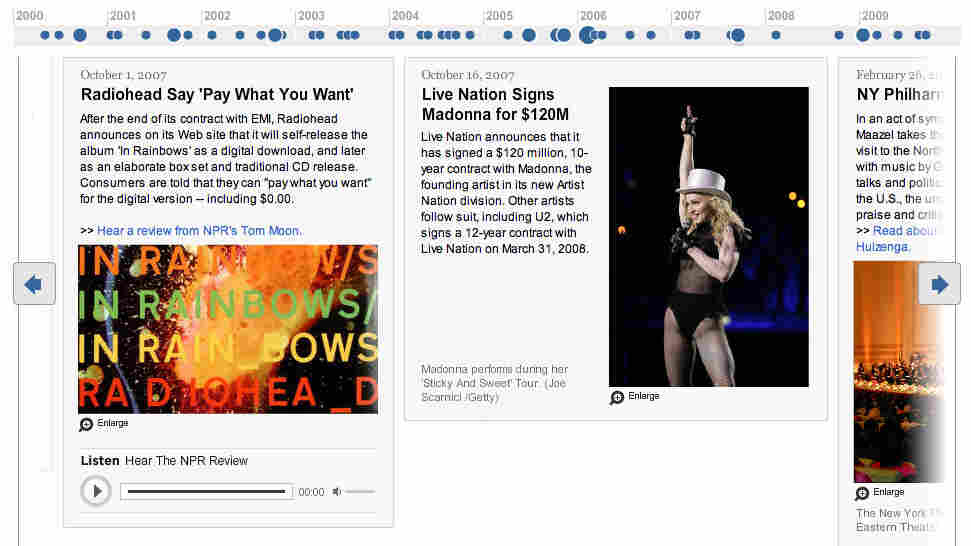 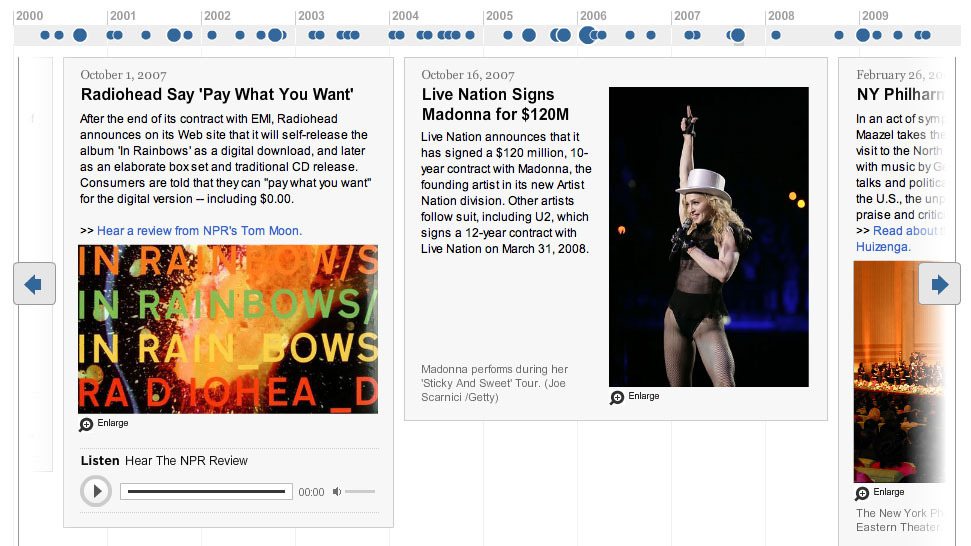 It's never easy to map out an entire decade in music. So, in constructing the "Decade in Music" interactive timeline, we sought to shape it with some of the bigger tent-pole trends, news (Elton John performing with Eminem) and groundbreaking changes in the industry, business and technology (Napster, the iPod). We also wanted to highlight albums (Britney Spears, Danger Mouse, Radiohead) that took a snapshot of the era, as well as deaths (Ray Charles, Johnny Cash) that affected everyone. And, of course, we wanted to include the occasional "wardrobe malfunction" controversy or bizarre curiosity ("Trapped in the Closet") that simply served as a funny bit to remember.

However, it was just the tip of the iceberg; a conversation starter. As soon as we posted the timeline, we started to remember more and more that we should have included. Over these past two weeks of discourse about the decade here at Monitor Mix, countless others have continued to come to mind.

We knew we couldn't fill in every news event, musician's death or notable release (sorry, Modest Mouse, Alan Jackson and Whitney Houston's comeback album), so we asked you for help in filling in the blanks.

Here are some other suggestions we received from the comments here at NPR Music and on Facebook:

-- While we briefly touched upon the musical impact of Sept. 11 tragedy with the Concert for New York City (and the wars in Iraq and Afghanistan by mentioning the Dixie Chicks controversy), there were plenty of other songs we could expand to include. Bruce Springsteen's The Rising was a stunning record that encapsulated the feeling of living in a post-Sept. 11 world, as well as composer John Adams' fitting response to Sept. 11 with his piece On the Transmigration of Souls. Then there was Green Day's rock opera American Idiot, which served as a fiery statement about the United States' status in the world, not to mention the spoof musical Team America: World Police and its tongue-in-cheek "America, F--- Yeah!"

But plenty of other anthems arose in response to the attacks, and reached a large, supportive audience -- from Alan Jackson's "Where Were You When the World Stopped Turning" to Toby Keith's "Courtesy of the Red, White & Blue" to John Ashcroft's "Let the Eagle Soar."

-- We implied many of the changes in music journalism and criticism by mentioning the rise of Internet music sites and blogs, which championed Arcade Fire, Clap Your Hands Say Yeah and many others. But the decade also saw the demise of fanzines and print publications like Blender, Harp, Vibe and No Depression, as well as financial troubles at Paste and JazzTimes.

-- While we talked all about the many failures of major labels, we should mention independent label and distributor Touch & Go, which fell into hard times, thanks in part to poor record sales and the flagging economy in early 2009.

-- Thanks to the suggestion of Facebook user Lee Kukkola, we added a story about the return of music to New Orleans after Hurricane Katrina.

More of your suggestions:

-- Will Cornelsen (cornmeal57): "June 2002: Bonnaroo Music and Arts Festival was launched, being one of the first of many new music festivals created this decade."

-- Casey Morris: "You must not forget the influence of electronic artists, most notably Daft Punk, Fat Boy Slim, Chemical Brothers and later Justice, David Guetta and Tiesto (cheese, I know, but necessary)."

-- Jay Schacht: "You might... and it pains me to point this out... include something about Soulja Boy and the rise of (shudder) AutoTune on the rap scene and its relation to ringtones as singles. I kinda feel dirty now, though. But it's a real trend."

-- Sara Christensen Ashley: "How about a nod to 'Once'? I think The Swell Season has done well enough to get up there."

-- Sean McKeever: "Though not the first to do so, Nine Inch Nails' free, surprise online release of Ghosts was a pretty big deal."

So, what else should be on a list that helps us now understand the decade? What news events did we miss? What overall cultural or musical trends? What were the notable musician deaths? What important bands broke up? Subsequently, which bands had notable reunions? What were the huge albums? Let us know here.