Accessibility links
Fugazi Stage Banter, The Musical : Monitor Mix My friend Jared pointed me in the direction of the Chunklet Web site, where he had come across this gem: Having Fun On Stage With Fugazi (posted 11.30.09 by H2O): Y'know, it's funny. Around 1990, I was convinced that there were no better live ... 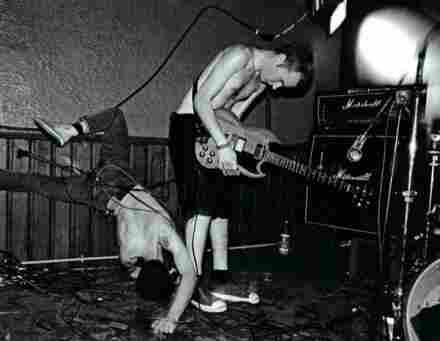 My friend Jared pointed me in the direction of the Chunklet Web site, where he had come across this gem:

Y'know, it's funny. Around 1990, I was convinced that there were no better live bands on the planet than Fugazi and The Jesus Lizard. And here it is, almost 20 years later, and I spent many a night following the latter across the planet (just like the ol' days) and I got to have my post-teenager sentiments reinforced as I watched four men all hovering around 50 years old f---ing sweep the floor with their younger counterparts' asses on a nightly basis. No question about it.

One thing I didn't particularly enjoy at these shows were the jag bags that were crowd surfing. I know, I know. I'm a f---ing drag for saying that, but when [David] Yow does it, he's a professional. When some yahoo with lumberjack boots does it, people get clobbered in the noggin. Sorry, it's the truth and it's lame. But, man, I remember Fugazi. I remember Fugazi telling people not to do it. And looking back on it, I think what a loving request it was. Even when I was 19 or 20, I'd deal with the jocks being violent, but Fugazi stood their ground and defended the majority of a crowd that wanted to enjoy themselves and not get injured in the process.

So it was with great pleasure when James Burns contacted me to tell me he had assembled a 40-plus-minute montage of Fugazi stage banter... Please enjoy and (if you're old enough) remember how blissfully intense their shows were.

Hearing this MP3 brought me right back to just about every Fugazi show I ever attended. In particular, it made me think of the time at The Capitol Theatre in Olympia, Wash., when Ian MacKaye walked across the crowd — like Jesus walking on water — in order to give an insolent kid his $5 back and ask that he leave the venue.

If you never witnessed a Fugazi show, let's just say that, for better or worse, they were a little more intense than the musical group hugs that a lot of contemporary shows resemble. I miss this band.

Any fond memories of Fugazi stage banter? Please share them in the comments section.