Accessibility links
HoZac Records: Interview And Music! : Monitor Mix For Carrie Brownstein, it was love at first speaker blow-out. She forwards the MySpace pages of HoZac Records bands — Woven Bones, Dum Dum Girls — to friends, drops the label's name in interviews and mostly (and most joyously) listens to whateve...

Sweet Lord, I love Chicago's HoZac Records. I am a relatively new convert to the label, introduced to it in late 2009 by Matador Records' Gerard Cosloy. But, trust me, it was love at first speaker blow-out. Since then, I find myself talking about HoZac bands all the time -- from Mickey to Myelin Sheaths to Wizzard Sleeve -- forwarding their MySpace pages to friends, dropping the label's name in interviews and mostly (and most joyously) listening to whatever I can get my hands on. 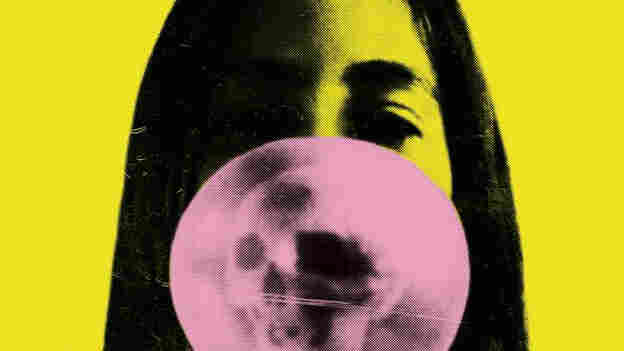 Artwork from the upcoming Woven Bones LP, In and Out and Back Again. Courtesy of HoZac Records hide caption

When I received a package full of HoZac 7" singles a few weeks ago, I spent two hours hovered over my turntable: setting the needle down, pacing around the room with the artwork in my hands, cuing up the B-sides, hand-clapping, foot-tapping and all-out fidgeting with an urgent sonic twitch. If you're solely a digital collector, this is the part you've been missing out on: There is nothing more satisfying, or more like a trampoline-leap, than a fresh stack of records.

As for HoZac's philosophy and what kind of music the label loves, I'll let the eloquent and insanely knowledgeable label co-owner and co-founder Todd Novak tell you himself. But I've also included six tracks from HoZac bands, all of whom happen to be playing the SXSW Music Festival.

Carrie Brownstein: What was the impetus for you starting a record label? When did HoZac start and what were the first records that you put out?

Todd Novak: We had been helping friends of ours who had labels for years while living in Chicago during its big musical re-awakening in the 2001-04 period (Ponys, Tyrades, Hot Machines, Vee Dee and so on). Music was really changing around the 2005-06 point that we really started considering getting behind a label ourselves. It was no longer the norm to mail in a money order from 7-11 for a 7" single from some obscure band you read about; it was PayPal and that instant ability to recoup your funds, combined with our unhinged excitement to keep introducing the world to newly discovered music that we just couldn't get out of our heads. We gathered up a couple newly formed bands, the members of which we'd known for a while in their previous incarnations for our first two releases: Volt from Paris, France, who were formerly in Splash 4, and Spider from Los Angeles, which was the brainchild of Erin Wood from The Spits and his lady Jessie. Both bands had odd similarities, in that one of the tracks on the Spider single was a tribute to Lili of Volt/Splash 4, and both bands essentially were home-recorded handmade miniature masterpieces in our eyes, which in the fall of 2006 was such an exciting concept. We'd always been fans of the "budget rock" mentality, and although neither sounded anything like The Mummies or the Trashwomen, these two bands seemed like a perfect fit for our first two releases.

CB: How many employees does HoZac have?

TN: Two, mainly Brett Cross and myself, with a few ramshackle A&R types that we call our Bored of Directors.

CB: Whereas other record labels have tended to broaden their rosters in terms of sound, style and genre, there is a singular grittiness and an unabashedly unpolished feel to many of your bands, not to mention a teenage sensibility (even if the bands themselves aren't teenagers). Why is it important for a label to specialize, as opposed to taking on a more eclectic, cross-genre philosophy? If not the sonic similarity, what would you say defines a HoZac band, or the artists with whom you're interested in working?

TN: Well, we do thoroughly enjoy the grittiness, and I still find it hard to release anything recorded super-clean-sounding, but if pulled off well, it can be just as jarring, like on the debut Dum Dum Girls album we're set to release next week. It's recorded by Richard Gottehrer (the guy from The Strangeloves who wrote the hit "My Boyfriend's Back" in the mid-'60s and produced Blondie and the Go Go's albums), and it's very clean, yet has our prerequisite scuzz factor boiling underneath the beauty; kind of our Je ne sais quoi when it comes to all of our releases, actually. I think we really enjoy introducing people to bands and sounds they don't think they'd like, in hopes of broadening horizons, I guess. Seeing a hardcore punk fan enjoying an Eric & The Happy Thoughts ripper or finding a twee-pop fan really warming up to the echo-eerieness of Wizzard Sleeve really makes it all worthwhile.

CB: How does HoZac fit in with the Chicago music scene? What is your own history within the Chicago music community, and do you think a label can still be an integral part to a city's music environment? If so, how?

TN: We've been holding it down for a while, based on the fact that just like most respectable record labels, we were born out of a print publication. Our magazine Horizontal Action (1997-2005) basically reinvigorated what was once an indie-rock/pop-punk ONLY city, into a welcoming, creative environment that now 10 years later forced rock venues to become 500 times more accepting to other kinds of music than it used to. I was the music editor/coordinator for the entire run, and we booked/hosted countless live shows for out-of-town bands along with picking out the best local support acts, including the five annual sold-out Chicago Blackout Festival shows (2001-06), which brought national/international attention to our city and the hotbed of incredible local bands around during the early-2000s peak. We still keep an eagle eye out for great new local bands, but despite a handful of exceptions, it's at a moderate point compared to the momentum that was churning at the beginning of the 2000s, but we're always optimistic that another era of greatness is right around the corner. But to be specific, we've always been a record label that focuses on a variety of what we consider incredible sounds, so keeping it Chicago-specific was never the intention, as we didn't even release anything by a local act until our fourth release and to date. We still only have about 20 percent of the records we've released done by locals, and that's just fine.

CB: Hozac puts put a lot of 7" singles. In some ways, we have returned to the era of the single, though your label seems focused on the physical more than the digital single. What are some of your favorite 7" records in your own collection, and how does your own history of record collecting and fandom inform your label's decisions?

TN: Hmm, so many records I could name here: Iron Virgin, Snuky Tate? And, yes, we still think the 7" single/EP is the best way to get to know a band, and we were really picky about which bands we thought could pull off overwhelming LPs, so that's the main reason the ratio of singles to LPs has been low. It's obvious that the bigger labels are rethinking their game plans as we've seen the biggest indie labels return to producing "limited" 7" records, as it seems fewer and fewer people can even conceptualize an "album" of songs vs. a single song based on the way people in general consume music nowadays. I have about four times as many 7" records as I do LPs, and that's mostly due in part to the fact that a lot of the best bands either don't even make it to the LP stage, or they were so incredibly great and volatile that they were short-lived, and that's usually the perfect criteria for good records in our eyes.

CB: Are there any other labels or business models on which HoZac is based or with whom you identify or see as a useful guide?

TN: Sure, lots of labels, actually. We've always had great impressions of labels like Sympathy, Bag of Hammers, Solid Sex Lovie Doll, Siltbreeze and In The Red for contemporaries, and as far as classic labels from days of yore, definitely Drome, Dangerhouse, Gulcher, Raw Records, Ork, RAK, Deram, Bell, Sire, Brain, Bang! and the oddest/best one of all, Phillips. I'm still amazed that I have a coffee maker that's made by the same company that released the debut albums by Blue Cheer, The Dogs, The Kids and so many other classics. Someday, when HoZac microwaves and dishwashers are available, you'll remember reading this!

CB: What is the most important instrument in a rock band?

TN: Guitars, but only if they sound like food processors.

CB: What bands, past or present, do you wish were on HoZac?

TN: So many, it's impossible to list them all, but any of the first-wave '70s French punk bands would probably be closest to the top. Oh, and Teenage Head, The Viletones and Kriminella Gitarrer.

CB: What appeals to you about garage, psych and rock more so than other styles of music? How does rock music stay fresh and relevant when some of the best of it still sounds like it's drawing directly from the early greats, from Link Wray to The Sonics?

TN: I still don't see what we release as garage music. We've had a lot of records with drum machines incorporated majorly into the sound, so I think that fact alone cancels out the garage comparison on a lot of the bands. Of our first say, 20 releases, White Savage was clearly No-Wave, Blank Dogs were gloomy synth-pop, Static Static conjured Suicide and the Screamers, Daily Void channeled Rudimentary Peni, Wizzard Sleeve mixed the dance beats of Magazine, Chrome and Peter Murphy sucking on a tailpipe, and Subtle Turnhips swooned over the unnatural oddness of TV Personalities and Swell Maps. I'd like to think we have a very clear handle on garage music, and it encapsulates the four S's: Sonics, Standells, Seeds and Strangeloves. I do very much LOVE all those bands, but no one sounds like them, and trying to ape them usually has humiliating results, so we usually strive to find the black-sheep bands who have something delightfully off-kilter going on, and who embrace the past yet have a solid modern sound, as well.

TN: I guess it means that even with the Internet's ability to instantly publicize and internationally distribute, these bands are still delightfully under the radar to most people, and that's where all the warmth and reality of modern punk stands up the best. We've seen how easy it is to jump from the "underground" right into the hands of a Southern Comfort-produced recording session, and that fine line can easily be crossed with the right factors in place. But by the same time next week, that same band can be just as unknown and under-appreciated as they were two weeks before. The underground will always be here, and no matter what, that's always where the best music will dwell.

If you are in Austin for SXSW, make sure to check out the HoZac Records party tonight (Wednesday, March 17) at 7 p.m. at Trailer Space. All of the bands whose music was featured in this interview will be playing!