Accessibility links
Music Fan Fiction: Glenn + Henry = TLA : Monitor Mix A few weeks ago, the minicomic Henry and Glenn Forever made its debut at the Stumptown Comics Festival in Portland, Ore. A work of sheer fantasy dreamed up by Tom Neely, Scot Nobles and Gin Stevens of the art collective Igloo Tornado, the comic po... 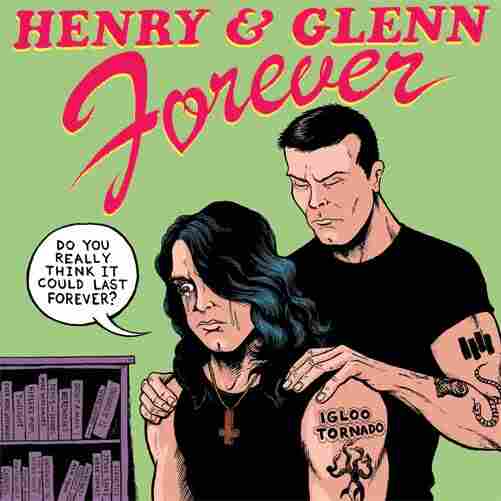 A few weeks ago, the minicomic Henry and Glenn Forever made its debut at the Stumptown Comics Festival in Portland, Ore. A work of sheer fantasy dreamed up by Tom Neely, Scot Nobles and Gin Stevens of the art collective Igloo Tornado, the comic portrays punk-rock superheroes and pinnacles of masculinity Henry Rollins and Glenn Danzig in a committed and loving relationship.

From the LA Weekly Blog:

Allegedly, when Henry Rollins was shown an earlier version of the minicomic, his reaction was to ask if Glenn had seen it yet. Rollins thought Danzig would have been less than amused.

As LA Weekly's Gustavo Turner also pointed out, the minicomic has "turned an old metalhead parlor game -- 'Who would win a fight? Danzig or Rollins?' -- into clever slash fiction, a non-explicit graphic novelette."

It does seem that the most logical (albeit extreme) conclusion to any musical super-duo or supergroup fantasy is to just go ahead and imagine them as lovers. After all, sexual preferences aside, many music fans can work themselves into an ecstatic frenzy imagining various sonic combinations and collaborations. ("The National is making an album with Thom Yorke and M.I.A.? OMG!" "Fleet Foxes and Bon Iver are touring together? That is so much sweaty beard -- I cannot wait!") Or just listen to my colleague Robin Hilton discuss musician Jason Lytle on any number of our All Songs Considered podcasts to realize how straight men fall in love with other straight men every single day, all under the guise of fandom.

What I appreciate about the idea of Henry and Glenn Forever is that it goes beyond the tired and obvious bromance genre. We all know that bros love their bros. But this time around, Rollins and Danzig are reimagined not just as punk icons, but as gay ones. Yes, it's a funny idea, and it plays into the inherent homoeroticism of early mosh-pit man piles, but it also acknowledges that just as fans are at the mercy of our idols' creative whims, musical heroes and legends are also subject to the imaginations of the listeners.

If you've dreamed up any fantastical musical combinations, romantic or otherwise, please share them in the comments section. But, you know, keep them clean.