January 29, 2007 • On Not Too Late, Jones and her band — including her boyfriend and a woman she met at band camp at age 15 — craft a pleasant and accessible mix of ballads, jazz and country-tinged pop songs.

Colin Meloy of The Decemberists

January 29, 2007 • Lead singer, songwriter and guitarist Colin Meloy is part of the indie pop quartet The Decemberists. The group hails from Portland, Ore. Meloy is known for using "10-dollar words" in his songs, and for "creating character studies that wouldn't sound out of place in a Victorian novel."

Colin Meloy of The Decemberists

January 27, 2007 • Spring Awakening is winning critical praise as a fresh interpretation of the Broadway musical. Based on a 19th-century play, the angst-ridden teen musical defies convention by dealing with tough topics and raw adolescent feelings.

Classical Music at a Crossroads

January 23, 2007 • The classical music press has been holding a deathwatch for decades. Why? Low ticket sales, crippling deficits and a slow fade from radio may signal a waning interest in Bach, Beethoven and the rest of the greats. Dana Gioia, chairman of the National Endowment of the Arts, and American composer John Corigliano talk about whether classical music is in crisis.

Classical Music at a Crossroads 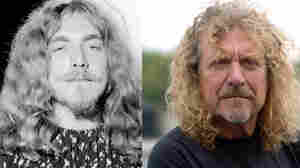 Led Zeppelin's Robert Plant, then and now. Courtesy of the artist hide caption

January 23, 2007 • When Led Zeppelin broke up in 1980, it left fans dazed and confused. For Robert Plant, it created the challenge of going solo after being so closely identified with one of rock's biggest acts.

Looking Beyond Gershwin's 'Rhapsody in Blue'

January 20, 2007 • George Gershwin's "Second Rhapsody" isn't nearly as well known as "Rhapsody in Blue," or "An American in Paris." But music professor Howard Pollack thinks it's one of Gershwin's most complex, interesting works.

Looking Beyond Gershwin's 'Rhapsody in Blue'

January 18, 2007 • Arnold Steinhardt is the author of Violin Dreams, a memoir about his ultimate challenge: playing Bach's Chaconne, a 15-minute-long piece for solo violin. Steinhardt has been chasing the Chaconne for more than 50 years.

January 17, 2007 • The Boston-based Dresden Dolls are on the verge of making it. They have a record label deal, draw ever-larger crowds and open for big-name bands. Still, just making enough money to survive remains a struggle.

January 15, 2007 • Alice Coltrane, widow of the legendary jazz musician John Coltrane and a giant of the jazz piano in her own right, has died. She was 69.

January 15, 2007 • Being the principal violist of the New York Philharmonic isn't exactly glamorous. But Cynthia Phelps says her section plays a "subtle but exciting" role in the texture and feel of the music.

Phil Ramone: From Behind the Boards

January 14, 2007 • The nine-time Grammy winner and innovative music producer has been behind some of the most successful records of the last 40 years. Ramone's short list of artists includes Frank Sinatra, Billy Joel, Ray Charles, Madonna and Rufus Wainwright. Hear an interview about his new book.

Phil Ramone: From Behind the Boards